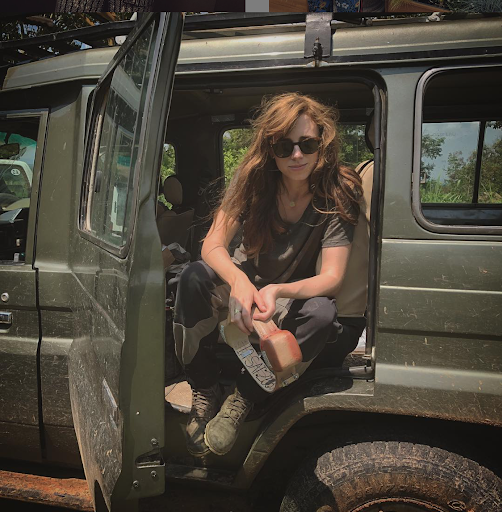 Siemiatkowski, 40, launched the platform to bring individual donors and companies closer to grassroots organizations around the world who need funding. The innovative tech being developed makes the donation process more transparent by cutting out middlemen and allowing a direct connection. The result is a greater engagement between donors and recipients and the possibility to better understand the impact they are supporting.

“We’re living in the midst of a tech revolution, and I live with a tech entrepreneur, so it was really a case of applying that to the charity sector, which was way behind the curve in adopting digital tools,” Siemiatkowski told Disrupt. “I wanted to support trusted, on-the-ground organizations, but I realized that it was very complicated and there were many middlemen. I took inspiration from Spotify, Patreon, and other services that had disrupted their sectors. I thought about how I could apply tech towards charity to make it easier to engage people and operate transparently.”

Siemiatkowski: “The Current Environmental Crisis is Being Discussed More”

“It was a first-hand experience. I tried to engage in lion conservation, and I wanted to really understand what the problems were. Why were lions disappearing? What could I do about it? What solutions were out there, and which organizations should I engage with? I approached some of the more prominent players in the sector first, but I didn’t like the lack of transparency. It made me feel far away and unable to make a difference. I had to dig deeper to find answers. And digging deeper, going beyond the big players, took me to the grassroots organizations, civil society, and the people that are on the ground. I was fascinated that you have these people all around the world, fighting for all manner of causes, including planetary health, who you never get to hear about. I had a profound sense that somebody had to start supporting them directly so that they could continue doing their vital work.”

However, current environmental crises like coral bleaching and deforestation have helped spark the launch of startups like Milkywire, which has encouraged consumers to start having those preservation conversations.

“Thankfully, the current environmental crisis is being discussed more and more, and people are really starting to take action,” Siemiatkowski said. “I founded Milkywire for those of us having these conversations and who want to be a part of trying to answer these questions. I wanted to make it engaging and motivating to be a part of the change, ultimately supporting the people fighting for our planet.”

Through the various charitable organizations on the platform, Milkywire directly addresses issues like coral bleaching and deforestation.

“I deeply believe that the people on the ground, carrying out the work, are the ones best suited to solve the problems their communities are facing, rather than dictating from afar how they should be tackling local issues. Communities in Peru working on reforesting the landscape know better than those sitting in offices in North America what needs to be done, and Milkywire – through our app, employee giving program, API solutions, and more – provides people who care with the possibility to fund this work directly.”

The most challenging part in building up Milkywire, according to Siemiatkowski, is serving as pioneers in the space. “We’re constantly innovating, so we have to figure so much out for ourselves and then explain what we’re doing to potential donors and partners.”

Siemiatkowski continued, “we’re under pressure to solve these problems quickly, all of us. I mean, the glaciers aren’t exactly waiting for us, so we need to hire the right people and remain agile as an organization. I also try to focus on the near-term goals, ones that are right in front of us now, rather than worrying about ten years down the line because it would be too easy to get overwhelmed and end up not taking any action at all.”

Today’s Millennial and Gen-Z demographic are more informed about the environment than any generation before them, Siemiatkowski explained. “They play a key role in moving the needle to save the planet. With that said, it’s up to all of us to fix the mess we’ve created. Everyone must act now, and more people wake up to understand the importance of caring for the environment each day. With new technical solutions, allowing for smarter ways to make an impact, combined with greater understanding, I am hopeful we can close the giant funding gap to protect and restore the planet.”

Despite being so young, Milkywire has already proven (and continues to prove) that it is bringing about real change for both donors and people in the field. “We’ve been working so hard to get to a point where you see that it’s working. To know that it means increased support for over 50 organizations across 30 countries so far, working to save the ocean, protect forests, fight pollution, and more. So that, for me, is the most exciting part. We are proving our concept every day by enabling change and environmental progress. I also find the tech we’re able to bring to this sector to be really exciting. It’s allowing us to change the way donations are received and then distributed, removing the middlemen and providing greater transparency.”