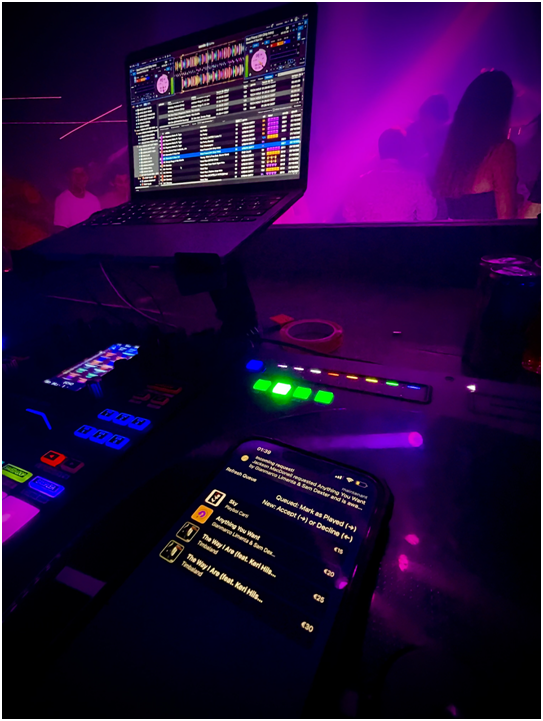 The DJ community is pretty tight and, for that matter, small – after all, how many people do you know who have an encyclopedic knowledge of Rihanna, Janet Jackson, Petshop Boys, and everyone in between? Not many. That explains why when one DJ discovers something that helps them mix up music for partygoers, it’s not long before other DJs are using it, too. DJs talk to each other. The proof is One28, which since its debut at the MK Club in Monte Carlo on June 10 has been spreading rapidly through clubs across France, Corsica, and Monaco. One28’s Co-Founder Adrien Crastes and DJ Chris S, the first DJ to use the app, agreed to answer a few questions about how the One28 app is shaking up how audiences make song requests.

“DJ Chris S has got a dream job, but it’s tougher than you might think,” Adrien believes. “He gets to party all night long and play music for hundreds of people – but that’s exactly what makes deejaying so hard. He’s got to figure out which songs will take the heart rates of clubbers up to 128bpm and avoid the ones that make them fall asleep.”

One28, as you have figured out, is named after this peak of emotion that individuals feel when they hear their favorite songs. Think about the last song you heard that made you feel better even though everything was going seriously wrong, and you will understand why it’s so important to choose great music at parties: choose the right song, and you have everyone out on the dance floor. If not, people go home early that night.

DJ Chris S says that he started using the One28 DJ App because he wanted an easier way to figure out the mood of the crowd. “Every night I deejay, I get a completely different group of clubbers, and it’s anyone’s guess what they are wanting to hear. I decided to try out the app so I could see if it could make it easier for me to receive song requests. It totally blew up.”

At the MK Club, DJ Chris set the minimum price for a song request at 15€ and received over fifty from partygoers who submitted them through the One28 User App.  “He actually turned down over half of them and was still receiving song requests the next day,” Adrien remembers. “He deejays often at the MK Club, so he decided to keep using the app that next weekend and played some of those extra requests then.”

DJ Chris S told another DJ about the One28 app, who told another DJ – well, you get the picture. Since the MK Club, the One28 app has been embraced by DJs in clubs across Southern Europe. Adrien says that the feedback he is getting is that both DJs and audiences are enjoying having a streamlined way to communicate and streamline song requests.

“It’s really a special relationship when you think about it,” he thinks. “Clubgoers come in search of a fun, relaxing night out, and hearing their favorite music is a huge part of that. The DJ, while in full control of the song list, is there to make that happen. With One28, communication between the two has been perfected, and the result is a ton of energy in the room, leading to a great time for everyone.”

One28, co-founded by CEO Adrien Crastes and CFO Alexandre Coyette, is an app that has streamlined how DJs receive song requests from audiences. By helping people request music that takes their heart rates to 128bpm, One28 is heightening the pleasure they feel at parties and clubs and in restaurants. In 2019, One28 presented their vision at the Monaco International Clubbing Show (MICS) and then began offering its app to DJs in June 2022. It has found enthusiastic support among partygoers and DJs and is changing the music scene.

For more information, please see its website or download the One28 user app or One28 DJ app.

“State Of Mind” By FBG Glizzy is Hottest New Single

TeeDirty is Somebody You Should Get to Know