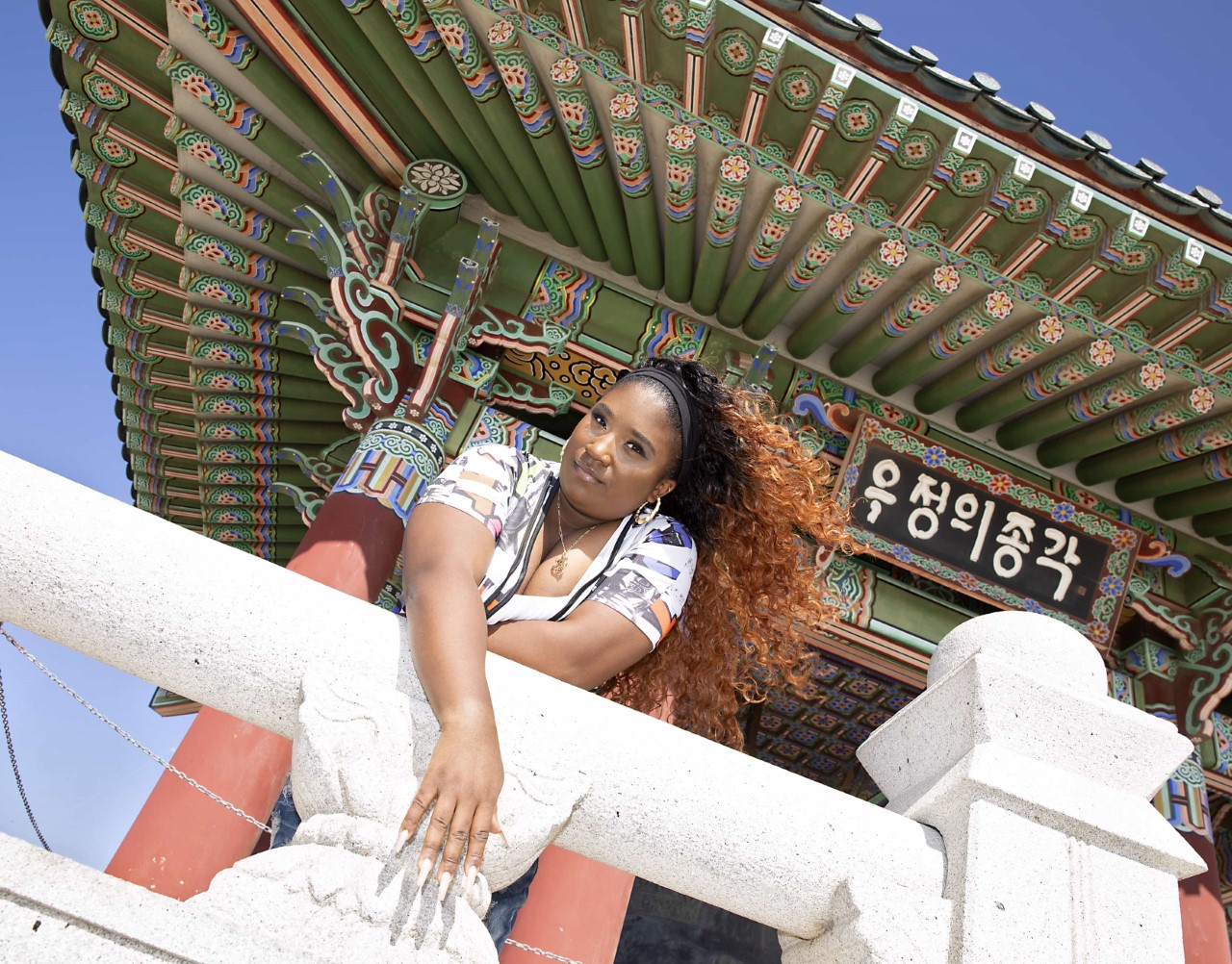 How did you begin your craft or artistry?

I began my artistry as a child. In Grade school, my teacher was concerned, because I wasn’t as social as the other kids, so she gave me a notebook and encouraged me to write down my thoughts.

First it started as me just jotting down small thoughts that would cross my mind, and shortly became poetry.

After discovering the art of poetry and being able to express myself, I really took a liking to it, and wanted to share it with others.

The problem was, I was very shy and nervous, so I would speed through my poems as quickly as possible, that everyone thought I was rapping.

After that I began to study to format of song writing and my poetry turned into a love for songwriting and performing.

Where were you Born/Raised? Have you lived in any other cities/ states/ or countries?

I was born in South Central Los Angeles, and I was raised in Rialto California.

As an attempt to escape the poverty of LA my mother and grandmother uprooted our family and moved us to San Bernardino county when I was like 5.

I lived in the I.E. for most of life.

A few years ago after becoming a mother and escaping a toxic relationship, I made the decision to move to Kern County to raise my daughter and be closer to family.

I started making music when I was nine.

I recall hearing rap music all my life, but there was a moment I remember quite well when the lyrics to a song resonated with me past a good beat.

I remember finding my mom’s old cassette Walkman and her telling me I can have it.

I pushed play, and learned there was a cassette already in rotation on it.

I was feeling real salty at the time about some petty situation with my older sister, and I felt like the song had captured my feelings at the time.

I was hooked ever since. I loved their way of storytelling over a beat and I wanted to do the same.

Writing had always been my thing, so this was right up my alley.

Who are some of your earliest inspirations? Why did they inspire you?

As a young Emcee I found myself admiring women such as Queen Latifa, Mc Lyte, Left eye and Da Brat.

I loved how these women were true to themselves in the aspect of originality in style and flow, as well as challenging the stereo type that women have to be soft spoken and or conforming to the idea of what a woman should be.

To me, they presented everything I wanted to be; Heard; Equal; Empowered; and so much more.

How many projects do you have releases? What are the concepts of each project?

I have album and 3 singles released.

The concept of my album, “Stubborn and still here” is a musical documentation of my trials and tribulation that I feel either tried to or should have broken me as an artist.

The album touches on relationships, family, friends, and self-reflection.

The singles I have released have a much lighter tone to it, highlighting a more lyrical creative side to me, as I use the power of storytelling to entertain over trendy beats.

The track, Reckless, is exactly that.

It’s a song where I am unapologetically living my best life.

The track is laced with a banging beat and catchy phrases from start to finish.

The track is gonna become the new ladies anthem once released.

The song is all about having a good time at any expense, and disregarding the small box I feel a lot of people try to put me in as a mother, a scholar, a philanthropist, a Christian, a wife and everything else.

I don’t think I have recorded a track like Reckless, but I can definitely see myself doing it again in the future, as it felt damn good doing it.

How many new projects do you plan to release in 2020 or 2021? What are the concepts of those projects?

I have two songs I plan to release between now and 2021.

I hate to toot my horn, but I must say, I’m super proud of these two songs.

I feel like the tracks are in a way, night and day in comparison, but I love it because I think it shows my range as an artist.

I don’t want to be boxed in to anyone’s idea of what or who they think I am.

In the words of Donkey from Shrek, like a parfait, I have layers.

One song offers more free-spirited version of myself, while the other I use my platform to speak on matters near and dear to me.

Words of advice to people who look up to your work.

My words of advice for anyone who looks up to my work would be, just keep swimming.

As cliché as it may sound, there’s so much truth to it.

I’ve been in this game for a long time, and feel I haven’t hit my level of success quite yet, because I caught on to this mantra late.

As a rising artist I ran into a lot of individuals who’s tried to stop my stride; and that used to really bother me.

I fell into this space of people pleasing, and trying to fit into this box that they felt would suite me better; which at one point lead me to walking away from music.

I allowed their inabilities to accomplish their own dreams put fear in my heart and create these huge “what-if’s?”

After I realized the reality that there will ALWAYS be someone out there trying to stop my shine or detour me from my aspirations, it allowed me to seek clarity in myself and what exactly I wanted and who I wanted to be in this world.

Now, although I still have moments of doubt from time to time, I use that to fuel my drive to succeed.

Now I know, my biggest flex is being me.

God broke the mode after me.

I’m one of a kind, and I’m learning to appreciate that.

Are you involved in your community? How? If so, what is your role?

I am extremely involved in my community.

Since I was a young child I’ve always had a servant’s heart.

I find joy in helping others.

As a child my mother and grandmother were always doing something in the community to give back, and made sure my siblings and I were present.

As an adult I now am the president of my own nonprofit.

My nonprofit is called Villagers Inc.

We got the name from the famous saying, “it takes a village to raise a child.”

Although I didn’t grow up having everything I ever wanted, I can’t say, I didn’t have support.

Family has always been of great value to me, and was instilled in me at a young age of how important it is.

I credit my family and support system for the woman I am today.

As a child I begin to realize early on, that everyone didn’t have that support, and not just financially but emotionally either.

So as an adult I take pride in being the village for that child or parent in need.

My nonprofit works diligently to help combat hunger, truancy, teen pregnancy, academic failure, and juvenile delinquency through the programs we offer year-round free of cost; which include mentorship, study trips, food distributions, tutoring, resume building, and so much more.

I wish to empower and inspire those around me so they too can reach their full potential.

What motivational or inspirational impact has Zenobia Records and Shaun B. had on your current Music Journey and the future plans that you are looking forward to as you advance with the label .

My relationship with Shaun B. and Zenobia records started over 4 years ago.

I was hosting community events with my nonprofit and needed live performances, which she would provide.

For quite some time, that was the extent of our relationship.

It wasn’t until here recently I’ve had the pleasure to work with her on a more creative aspect.

Shaun B. and I embody a lot of the same morals and ideas on life, which plays a huge role in why I feel we work so well together.

I love how genuine she is, and how her value on family and loyalty allows me to afford the comfortability to focus on my craft as I know she has my best interest in mind. Shaun B. challenges me to explore new concepts and push myself to new limits.

She lights a fire in me that makes me even more passionate about my craft.

To me, Zenobia Records represents family and home.

I’m excited for the heights we will reach and the way we about to take over the game; like, undeniable, we about to shut it down.

What do you want to tell your fans?

I feel like they’ve been so patient with me, as I’ve journeyed on the road of discovery, as my sound and voice has developed over the years and my purpose has strengthened.

I have so many “fans” as you would call them, that have become genuine friends and who really believe in me.

Like, I find that so intriguing to know some of my greatest supporters are people who I’ve never even met before.

My DM’s are full of kind words of affirmation, and motivation to continue to push through.

They accept me for me and I absolutely love them for that.