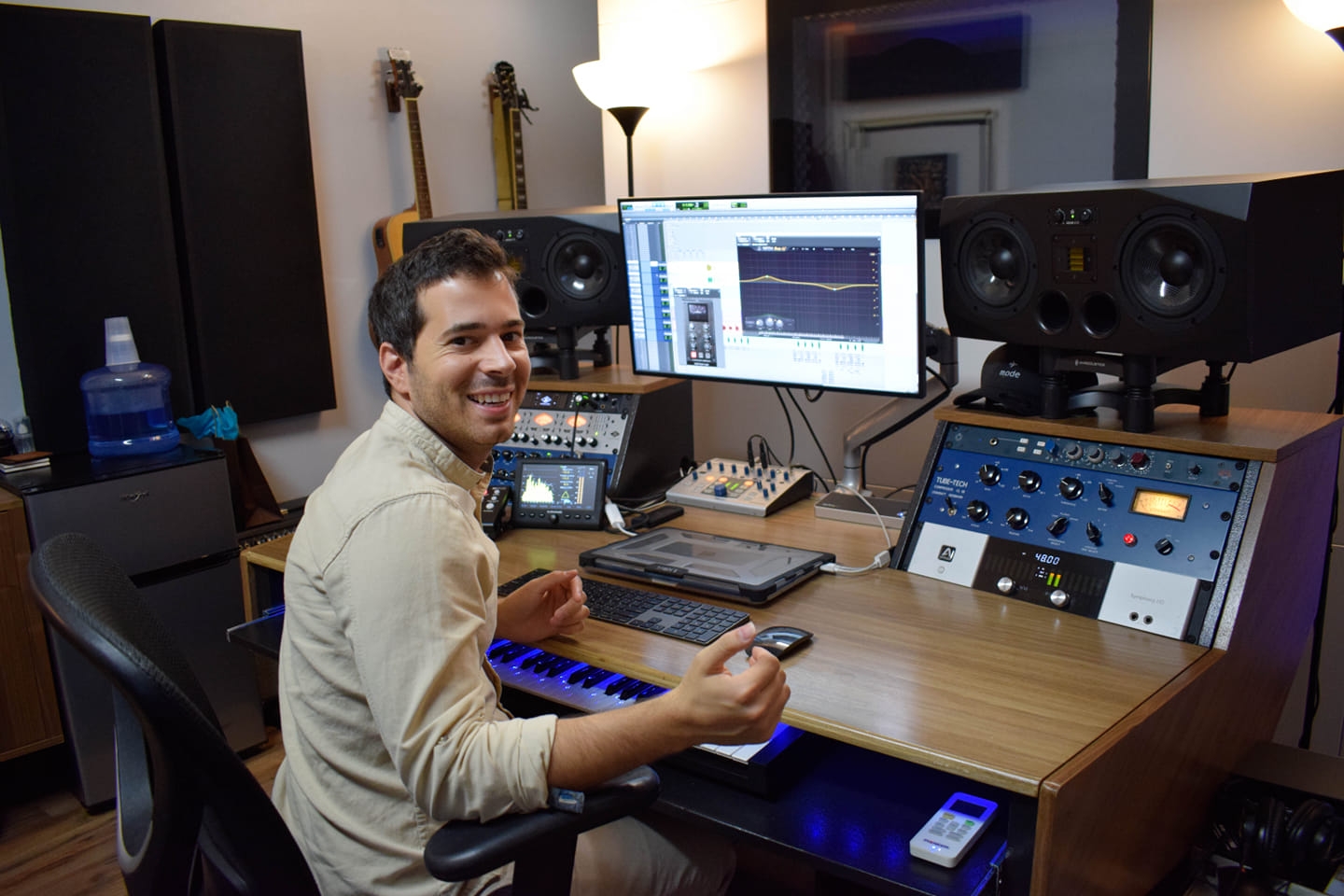 In today, we had a chance to talk with an “Award Winning Mixing Engineer”, better known as Shalev Alon. If you aren’t familiar with Shalev Alon read on.

Shalev Alon was born and raised in a small town to a farmers parents in Israel. He later moved to Los Angeles to pursue his passion for music and to make it a full time career.  After his service, he studied production in Israel mixing music for live shows, when he finished his service in the army he decided to study at Musician Institute College Of Music, there he took the audio engineer program with emphasis on post-production.

After 1 year of practice and studied his professor finally heard some of his mixes and recommended him to go for an interview at Remote Control Production (Hans Zimmer Studios). The Long trials finally payoff, Shalev Alon got accepted and he had the chance to gain a lot of great experience from amazing composers and engineers such as Hans Zimmer, Henry Jackman, Allan Meyerson, Heitor Pereira and more…

1) Can you tell us a story about what brought you to this specific career path:

Shalev Alon: I am originally from Israel and started my way in music as a guitar player, I grew up on a farm in a small city in the middle of the desert, my parents are farmers growing pepper in the Arava, they were very supportive in my passion for music.

A year before I was recruited to my service in the army I lived in Tel Aviv working with different artists on production albums and mixes. It is an obligation to serve in the army in Israel, so I had three years where I had less time to spend working on my craft as a mixing engineer, I was in the K-9 unit for three years.

After my service, I have studied production in Israel mixing music for live shows. When I finished my service in the army I decided to study at Musician Institute in Hollywood, there I took the audio engineer program with emphasis on post-production.

2) Can you share the most interesting story that happened to you since you started this career?

Shalev Alon: I have many stories that happened to me during my work in different studios.

An interesting story that happened to me during my work on Star Wars Land was the day where we implanted the music into the park itself. We came with the music producers and basically did the mixing on the rides in the park while we were experiencing the ride.

There is the original Cantina Bar from the Star Wars series and we had to mix the music in the Bar through 7 different speakers that are in different places in the bar and it was such an amazing experience to be in the park and be the first one who is taking the rides while the park is closed. The Star Wars Disneyland park is one of my favorite projects!!

3) Can you share a story about the funniest mistake you made when you were first starting? Can you tell us what lesson you learned from that

Before i started to mix the album we had a meeting with the CEO of Disneyland Japan and her team. Me being a total Anime nerd, I know a couple of songs in Japanese, when they heard about it they asked me to sing one of the songs i know and I started to sing in Japanese.

The CEO and her team started to sing along and that was the first impression I did on the whole music department from Disneyland Japan. My lesson from that story is that you never know what can help you make a good impression on your client and a lot of the work is sometimes just a good person to hang out with.

After all music is a very emotional and intuitive work and you need to feel comfortable with your team.

4) What are some of the most interesting or exciting projects you are working on now?

Shalev Alon: These days I am working on a big  music trailer for Universal with an Emmy nomination composer whose name i still can’t say because it’s still confidential.

Many of the movie trailers you see on television or YouTube that are in the making in Universal studios came under my mixing desk.

Documentary film that will feature in the Sundance Film Festival one of the most prestigious film festivals.

5) Who are some of the most interesting people you have interacted with? What was that like? Do you have any stories?

Shalev Alon: While working at Hans Zimmer studio I have met people like Hans Zimmer of course, Christopher Nolan, Ramin Djawadi the composer of Game Of Thrones, I have met John Williams, Randy and Thomas Newman.

I have met the Cast of The Handmaid’s Tale, while I was recording a live orchestra that was playing the soundtrack during the last episode that premiered in Hollywood.

When working in Windmark Recording studios I have met Nick Jonas, Zahra Larsson, Young Thug and many more pop talents.

6) Which tips would you recommend to your colleagues in your industry to help them to thrive and not “burn out”?

Shalev Alon: One of the best tips i can give is to give yourself small tasks to conquer.

We all have our big dreams, but we need to also think on a path of how to get there, set yourself with small goals that you need to accomplish and that will get you closer to your final goal.

7) You have been blessed with success in a career path that can be challenging. Do you have any words of advice for others who may want to embark on this career path, but seem daunted by the prospect of failure?

This is the keyword for our career in the entertainment industry.

There are so many people who are chasing the same career but you need to remember that not all of them are staying consistent with finding work, finding new studios to work with or keep creating everyday.

keep working, creating and making connections everyday even if its one track or one person you meet its a progress!!!

8) Can you share with our readers any self care routines, practices or treatments that you do to help your body, mind or heart to thrive? Kindly share a story or an example for each

Shalev Alon: Because our work these days is in front of a computer, I try to maintain a work out almost everyday even if it’s just a short hike, a 10 minutes routine of Yoga or meditation.

Any type of activity where you move your buddy can help.

Start with something that will be easy for you to dedicate time to, like 10 minutes of a workout, and try to increase it by a couple of minutes or hours every month.

I like to surf, take a hike , run and play volleyball…

9) What are your “5 things I wish someone told me when I first started” and why. Please share a story or example for each.

Shalev Alon: The first one is that not all of the people who says they want to work with you actually mean it, when I just move to Los Angeles I was exciting from any person that says he might have a project for me and I started to learn that there is this type of figure of speak that people often use to keep the “door open” if they will ever really need you for their project.

The second is to be patient and don’t rush into projects, I had some clients that I needed to be more laid back when working on their project.

Sometimes artists actually want to take their time to finish their projects. I believe that these are the most important things I would like to tell to myself.

10) Can you please give us your favorite  “Life Lesson Quote”? Can you share how that was relevant to you in your life?

Shalev Alon: My favorite quote is

Working on big projects with big companies can be very business oriented and we need to keep in our mind that we are all working in this industry for the same reason, because we love music and because this is what makes us happy, to wake up every morning and listen to beautiful music at work.

11) None of us are able to achieve success without some help along the way. Is there a particular person who you are grateful towards who helped get you to where you are? Can you share a story about that?

Shalev Alon: My first opportunity, i received from one of the professors from the school I went to.

His name is Michael Deasentis.

He was the first one in Los Angeles that listened to my mixes and helped me to get the interview at Hans Zimmer studio.

Shalev Alon: I think music can actually bring peace to the world, its the most popular international language.

My biggest dream is to open a school for kids who are unfortunate to have money to play or learn music and be able to give them access to the music world that will give them a reason to stay off the streets.

13) We are very blessed that some of the biggest names in Business, VC funding, Sports, and Entertainment read this column. Is there a person in the world, or in the US whom you would love to have a private breakfast or lunch with, and why? He or she might see this. 🙂

Shalev Alon: I would love to have a meeting with an A&R person or a music supervisor from one of the big record labels.

I believe this can be a great collaboration; working on mixes for major pop artists is always my true passion.

Related Topics:awardShalev Alon
Up Next