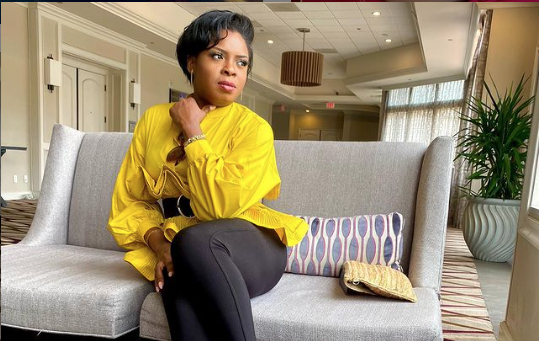 “As much as I add a lot of fashion to my designs – a lot of creativity – I also need it to be extra me,” says international award-winning fashion designer Ugochi Iwuaba. Iwuaba, who is originally from Nigeria, is an up-and-coming designer who has participated in various fashion week shows globally and has had her work appear on the red carpet of the Met Gala. Heavily influenced by her background, the designer creates conversational pieces that range from custom clothing to special occasion bridal and evening wear gowns. Her style itself is a fusion of African and Western elements, visible through her use of bold colors, trims, and unique silhouettes.

While growing up in Nigeria, Iwuaba recounts how she received a brochure one day from FIDM San Diego. Already interested in fashion and a love for well-tailored clothing, Iwuaba wanted to pursue fashion design. However, she was unable to come to the United States for school, and instead pursued degrees in different areas that include international relations, history, and real estate.

When Iwuaba did finally immigrate to America, she pursued a typical 9-to-5 job. However, after finding out that her third child would be diagnosed with Down Syndrome during her third pregnancy, Iwuaba realized she was in a situation in which she required something more flexible to take care of her child. Although she describes it as a dark time in her life, Iwuaba “put that darkness into making clothes,” which is how she persevered. A distressing period turned into something beautiful as she started creating her art.

At first glance, Iwuaba’s pieces have an energetic spirit to them. They are, after all, an extension of her cultural background. “I’m from West Africa, specifically Nigeria. Nigerians are the most flamboyant culture in Africa,” says the designer. In addition to this, her designs are also influenced by her knowledge of art and history. While Iwuaba does enjoy adding fashion through a clean-cut and well-tailored design, she says that she needs her designs to ultimately be representative of who she is.

Her latest most recognizable piece may be a goddess-inspired golden caped gown paired with a matching headpiece worn by Nina Parker, an E! News reporter, at the Met Gala red carpet. Parker is also scheduled to report on the Emmys this weekend and will be wearing another piece designed by Iwuaba.

Besides her growing accomplishments, some insight that Iwuaba can offer as a designer is to let your creativity, thoughts, and ideas flow out. As an artist, the only thing that can hold you back is fear. “Our minds are so powerful that they can do so many things. We just have to let go of fear and let it all out,” expresses Iwuaba.

Stay updated on the designer and her brand through the following links:

How Covonna Aguillard Disrupted The Coaching Space: Lessons To Learn