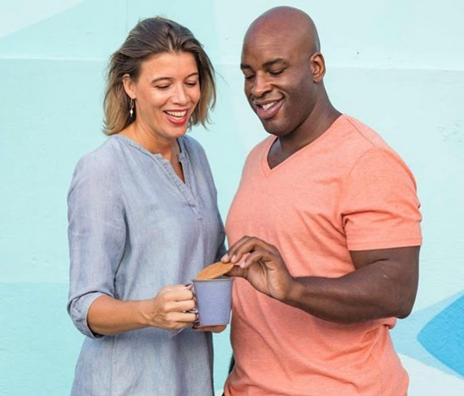 A stroopwafel is perhaps one of the most convenient and underrated snacks on the planet. The thin cookie sandwich, which is made of two wafer cookies and a gooey caramel filling, is not only handy and stores for a long time, it is also utterly delicious and pairs well with just about any hot drink imaginable – tea, milk, coffee, or even hot coco.

But did you know that there is more than one way to enjoy this perfectly sweet, caramel treat?

Former NFL player John Bronson, (Arizona Cardinals) and Dutch native, Femke Veelenturf are the co-founders of Finger Licking Dutch, one of the country’s leading stroopwafel brands. John and Femke, tells the five of the best ways to enjoy this all-day, all-season Dutch snack.

Bronson remembers the time he first encountered stroopwafels. It was during his and Femke’s first date. Originally from The Netherlands, Femke was working as a school teacher then. She handed him a hot mug of coffee with a cookie on top. After having a taste of the warm caramel surrounded by two crispy wafers, he was hooked. It was all thanks to this moment that Finger Licking Dutch was born. To this day, Bronson still thinks that the traditional way is one of the best ways to eat a stroopwafel, especially in the mornings.

The great thing about stroopwafels is that they are not too sweet yet they deliver great caramel flavor. This makes them the perfect compliment to everyone’s other favorite dessert–ice cream. You can either break them up and mix with your flavor of choice or use them to make ice cream sandwiches that everyone will surely love.

Thinking of a delightfully yet different way to enjoy stroopwafels? Introducing stroopwafel s’mores. You’ve may had the traditional graham cracker s’mores but now it’s time to take it to the next level. Thin crispy wafers filled with ooey gooey caramel sandwiching three our four puffy marshmallows in between. Heat it up, however you like; campfire, oven, barbecue.

You can never go wrong with a caramel-chocolate combination. I mean, the two were practically made to always be together. Now imagine, topping your stroopwafel with vanilla frosting or nutella.  Want to make something special for movie night? Heat up some milk chocolate, vanilla frosting or nutella. Want to make it extra special gourmet? Just add some sprinkles, nuts, chocolate chips, M&M’s, or so sea salt  You’ll have some stroopwafel desserts  to remember.

There are days when all you really need is the good ole classic taste of stroopwafels served as is. They are especially fun to enjoy after a spring jog,

on warm summer afternoons after a quick jog outside. Especially great for the outdoors, cyclist, runners, campers.

Want to spice it up? Pair with a glass of red wine, prosecco, or a dark beer

Regardless how you choose to enjoy it, there is no denying that this traditional Dutch cookie is something everyone who tastes it will love. Share it with family and friends to spread the stroopwafel love everyday.

Finger Licking Dutch Stroopwafels produces and imports authentic, Non-GMO Dutch stroopwafels that are free from artificial colors and flavors directly from The Netherlands to the U.S.A, Canada, Europe, Carribean and other countries. They’re available in various sizes in over 4,500 retail locations nationwide. You can find us and our recipes on: https://fingerlickingdutch.com.

Should you switch to automated marketing reports?