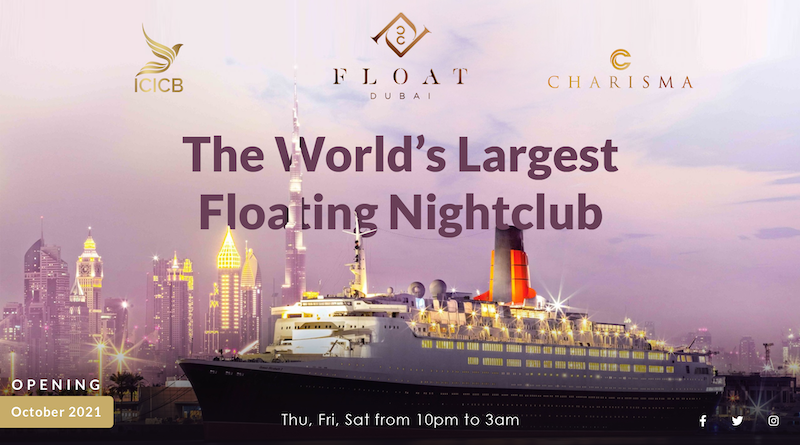 Historic QE2 is about to enter the modern age thanks to the launch of the world’s largest floating nightclub. Float is a joint-venture equally owned by ICICB Group, ME’s leading financial services company and Charisma LLC. The club will open its doors in October, promising party-goers one of the best nightlife experiences in Dubai.

The nightlife scene in Dubai is set to get a whole lot wetter as the world’s largest floating nightclub dubbed ‘Float Dubai’ is set to embark on its voyage into the Dubai nightlife with its launch on Queen Elizabeth 2, the city’s first hotel on the water.

Float Dubai is a state-of-the-art club that looks to blend the energies and fashion of the past, present and future to offer a unique atmosphere that is unmatched across the city and around the world.

The rich history of Queen Elizabeth 2 offers a one-of-a-kind environment that captures the energy of a time long past and brings it forward to the hustle and bustle of the rapidly advancing city of Dubai and integrates it with emerging technologies.

With backing from ICICB Group, one of the world’s fastest-growing multinational investment holding companies, Float Dubai is charting a course to become the most advanced nightclub and floating hotel the world has ever seen thanks to a global network of businesses focused on financial services and the development and advancement of digital technology.

Another major partner within the ICICB Group ecosystem is the world-renowned videogame innovator and interactive entertainment company Atari, which has partnered with the group to launch a series of Atari-themed hotels, with a location in Dubai, as well as other blockchain-based gaming projects.

Now, ICICB Group has set its sights on helping to further advance the hotel and nightclub scene and will use Float Dubai as an avenue to achieve that goal.

Float Dubai is located at Port Rashid and will boast an outdoor club capable of hosting 1000 people on the highest deck of Queen Elizabeth II. The club also features a lounge on the lower deck where patrons can have a drink and relax with their friends or mingle with some new acquaintances.

The club will be open on Thursday, Friday and Saturday evenings from 10 pm to 3 am and will focus on providing guests with world-class entertainment with unique, new shows coming each week showcasing some of the best local DJs as well as popular international DJs and artists.

Entry into Float Dubai is free, but those who want to have a next-level experience by booking a table should note that there is a minimum spend requirement.

Float Dubai’s main floor includes a mix of high tables capable of hosting up to four guests as well as bigger booths that offer an excellent view of both the stage as well as the iconic skyline of Dubai as its backdrop.

The dinner menu has an extensive list of choices from around the world including authentic Japanese sushi and sharing platters featuring Latin and Pan-Asian cuisine.

Charisma Management is a hospitality management company that develops, owns and operates successful nightlife venues as well as producing concerts and events and providing lifestyle marketing solutions in the United Arab Emirates with plans for global expansion.

Float Dubai is set to become the premier nightlife destination in the City of Dubai and could soon find itself as a popular must-go destination for travelers and locals alike thanks in part to its central location that is within reach of some of the city’s most popular attractions including Burj Khalifa, the Dubai Mall and the Dubai International Airport.

Having one of the largest financial services companies ICICB Group on board as partners, Float is all set to take partying in Dubai to a whole new level from October 2021.

How Small Businesses Can Use AI to Be Seen

Julian Lim is a technology entrepreneur and researcher. Julian has graduated from NUS in intelligent systems and started his career pursuing data analytics and research. He’s also an editor and senior writer at Entrepreneur magazine, covering technology, startups, AI, blockchain and entrepreneurship.