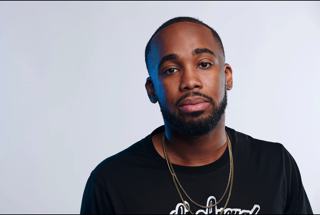 Jersey Demic (@kingdemic) is a staple in New Jersey culture and arts with a long history of being embedded in the music scene of the Garden State. Born on the island of Dominica and moving to the U.S as a young child, Demic is motivating the minds of aspirational youth as a shining example of success.

His career began with the Hot Impact Nights as he hosted and performed at some of the biggest lifestyle events in America. Since then, Demic has managed the tours of some of the most talented hip hop artists on the scene. He’s also curated content and created marketing strategies for syndicated TV influencers and large corporations.

Now he’s focused on releasing music. His career has been covered on websites such as World Star Hip Hop and Okayplayer. He’s performed at SXSW and showcases sponsored by corporations such as Visa and PayPal. Currently, he’s authored his first book and released his new music video “Kobe for Dinner.”

Demic bought his first piece of recording equipment during his freshman year of high school. He instantly fell in love with the process of creating musical art, and his obsession has continued ever since. He credits much of his early inspiration to Nipsey Hustle, the late hip hop artist who was also a talented entrepreneur and devout family man. Demic has followed Nipsey’s lead, starting businesses outside of Music and helping his family prosper.

According to Demic, the biggest challenge to anyone looking to start their career in music is negative influences.

“The biggest challenges are your friends and family who don’t support and always have something negative to say.”

Demic also believes that a lack of money is also a hurdle. He focuses on building businesses outside of his personal music career in order to invest in himself and his craft. As a side note, it’s also smart to do this with any passion you have. For example, if you want to start a business, don’t quit your job right away. The money from your job will help keep you fed and can also be used to grow your business.

But don’t be fooled, Demic warns. Starting a business is tough.

“If you don’t have your mindset structured, a business can literally cripple you mentally. This industry of business isn’t for the weak. But a strong mindset can overcome hurdles like inexperience or disappointment, which are common when starting out.”

Demic understands how to growth-hack social media using secret tactics and Facebook/Instagram by advertising. Demic believes that if you know your audience it’s easy to scale. If you don’t then you’ll churn too much cash and time.

The level of success Demic has obtained on an independent level, signed artists wish they had. He’s figured out the secrets to cash flow and is able to invest his own money into his projects which give him ultimate freedom and the upper hand in negotiating.

When discussing his biggest setbacks, Demic mentioned that he once drove over two hours to perform at a show. But when he arrived he realized that he left his show music at home. He decided to make a checklist of needed items for shows so he’d never forget again.

On the flip side, Demic filled us in that at a time when signed artists weren’t doing big shows, he was performing for crowds of up to 30,000. Which all stemmed from his own ability to book talent and negotiate with the venue and event planners.