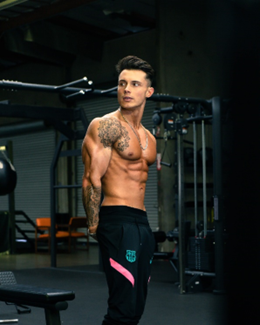 His dad died when he was 2 years old..

As a single mom, she worked her ass off to give Marco and his sister a good life..

When Marco was only 15 years old in the Netherlands, he was given an opportunity..

An opportunity to put his hat in the ring and become a pro soccer player..

But he failed miserably.. He didn’t make the team and his purpose was thrown out the door.

Have you ever failed at something?

Something you worked so hard for?

He became lost and had no direction in life..

He spent more time getting wasted on the cold streets in the Netherlands than he did in school.

His mom, had enough of his bull shit so it was time for Marco to move out of the house and grow up..

A tiny attic above a loud bar in the city became his first apartment.

Marco’s “apartment” being the size of a closet..

With no idea how to cook or take care of himself..

Marco’s soul guided him towards fitness.

He began lifting weights and studying everything he could find on nutrition.

After being purposeless, lost and negative for so long..

Marco had a purpose, direction and the confidence to chase his dreams

He enrolled in University.

Shortly after, it was time for Marco’s internship as he was nearing the end of his program.

At this point, fitness had already boosted his confidence through the roof

So, Marco decided to attempt what others thought was impossible..

To finish his degree in the land of opportunity, the USA.

Sitting in his apartment, he received rejection after rejection for months..

One day, Marco received an acceptance letter to finish his university thesis at BMW in San Francisco

He packed his bags, said his goodbyes and flew to California USA to finish his degree!

Have you ever wanted to go after something you wanted but let excuses take over?

He took a corporate finance job at a big investment company in LA.

Soon realizing how most of these businessmen & busy professionals working with Marco were out of shape, unhealthy and miserable..

Co-workers began asking Marco for help with their fitness and health goals because they saw how with an equally busy life as theirs, Marco was still able to maintain an incredibly fit body..

Now realizing that there was clearly a need for helping businessmen & busy professionals get their health and life on track while working a hectic schedule..

Now if you’re a businessman or busy professional in some capacity and you want to be Marco’s next successful transformation 100% for free..

Then click the link below for Marco’s Free 3 day video series where he teaches you everything you need to know to get in and maintain the best shape of your life even while having a hectic schedule like Marco’s 100’s of successful clients.

Related Topics:Marco Jimenez
Up Next