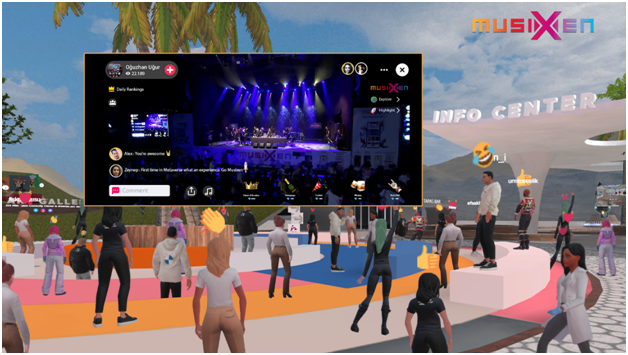 Years ago, physical attendance used to be the only way to engage with a musical performance. Yet as technology has evolved, music has expanded into the digital realm, first online, and now into the next frontier for cultural experiences: the metaverse. Building on all 3 of these mediums, digital music pioneers Musixen recently took a global lead with their unique hybrid performance, the first of its kind anywhere on the planet, and a clear step towards the future of what it means to engage with the world of music.

On August 28, 2022, thousands of spectators sat down at one of Istanbul’s premier open air performance venues, Maximum Uniq, for the experience of a lifetime. Yet while their seats were physically full, over 20,000 others (around double the venue’s physical capacity) were also able to tune in and experience Oğuzhan Uğur and his guests’ performance as it happened via Musixen’s app and on the Atlas Space metaverse platform. It’s a testament to the power of companies like Musixen to harness the metaverse’s power and enable organisers to do something they could never do in real life — host a seemingly impossible number of people at an event while keeping engagement at its highest.

A new era of curation

Musixen prides themselves on a hyper-curated approach that sets their platform apart from other major players in the streaming world, like TikTok and YouTube Music. Rather than offering music, chat, gaming functions and more, or allowing anyone to sign up and start using their platform, Musixen only offers music content — and requires each of their artists to undergo a stringent evaluation process before they can officially be inducted as part of the community. Yet, this approach comes with a host of benefits for musicians looking to capitalise on the new paradigm, including the fact that every artist is given proprietary streaming training enabling them to quickly get up to speed on how to make the most of Musixen’s digital platform and put on world-class performances for their fans.

While physical events aren’t going anywhere anytime soon, and are often near the top when it comes to engagement, digital and metaverse experiences like those being pioneered by Musixen are catching up fast — a trend which the team predict is going to experience massive growth alongside the ongoing evolution of consumer preferences for entertainment styles and mediums. To date, Musixen’s approach has led to some notable results, with the average Musixen session clocking in at 3 times as long on average as other leading streaming platforms.

Lots has happened since Musixen’s foundation 2 years ago as a startup with a goal to shift the balance of power from corporations to artists, empowering them with flexibility in how they schedule concerts, perform live, interact and engage with their growing fan bases around the world, and get paid for their never-ending hard work. As they’ve grown in popularity, Musixen’s sights are no longer just set on Turkey, with recent launches in several other countries already, and others planned for the near future. As they refine their processes and increase the output of their one-of-a-kind hybrid experiences, the sky’s the limit — whether it’s the physical sky, the virtual sky, or a combination so realistic and engaging it’s impossible to tell what’s real.