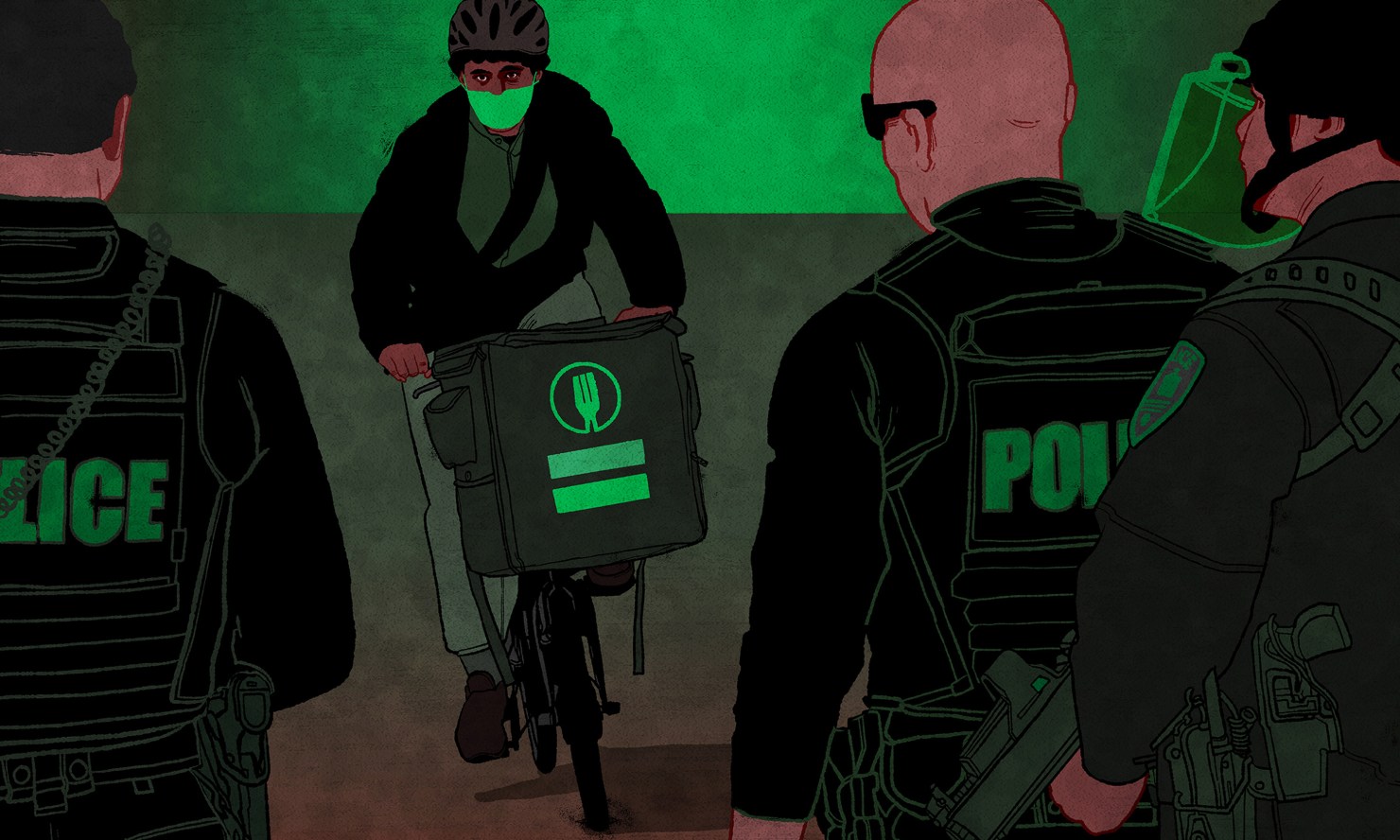 NYPD appearing to have arrested the Caviar delivery person

More than a month into the curfew restrictions, some people don’t know whether their job is classified as an essential service or not—specifically, the workers doing deliveries of food and groceries.

This issue aggravated after a video made rounds on social media with a delivery person being confronted by more than five New York Police Department officers. His bike was lying there as he pleaded not to be arrested. He was wearing his delivery bag as he asked them to leave him.

This delivery guy thought he’s an essential worker, police seemed to disagree. The rules issued before the curfew very unclear but according to the state, restaurants, bar & food industry workers are classified as essential. #nycurfew #NYCPolice pic.twitter.com/OyZVuDkPuM

“You are violating New York’s City curfew orders,” an officer says in the video. “Are you serious? Look, look, look, look!” he says as he says that he has done nothing.

The delivery drivers have been on the police’s radar following the pandemic and the George Floyd demonstrations across the country. They are being arrested every day and charged with petty offenses for not following New York’s orders. On the contrary, the drivers have been following the companies’ advice without knowing that they might be exposing themselves to breaking the law.

Various apps like Caviar, Uber, and Instacart that are used for delivering orders have been in operation during this curfew period. These companies have exposed the employees to a pool of risks. The company is not responsible for their health care and vehicle maintenance. It is also not responsible for any illegality undertaken by the drivers.

A technological researcher argues that the law has put some rules to ensure employees have a safe workplace. However, with the increasing number of deliveries, some independent contractors agree to do the job with few or no risks covered by the company.

Uber, DoorDash, Caviar, Lyft, and Instacart said that they ensure that they prioritize the safety of their employees. They continue to say that their policies are in constant support to those that have been caught up by the recent regulations and legal disputes.

In some steps to protect its workers from coming into contact with the clients, DoorDash established a contactless delivery. They have been distributing Personal Protective Equipment to the couriers and offering financial-assistance to those found positive for Covid-19.

There are those consumers who connect with individuals who are able and willing to deliver the packages. The companies disregard them as their employees. In their view, they are an independent contractor and should not be covered against anything. Thus, the companies are in objection to the California legislation aiming to designate them as employees rather than contractors.

Nonetheless, the companies rely heavily on their drivers and couriers to meet the demand faster, which keeps the waiting cost low.

The workers say that the legal and financial assistance offered to them is not enough. They are mostly immigrants and undocumented people who don’t want to cross paths with the law since that might affect their immigration status or future job expectations.

Lyft and Uber have been the pacesetters in the gig economy with their model for original aggressive expansion that happened a decade ago.

Since the pandemic began, the number of new workers has skyrocketed – most of them do not know the risks involved. The companies have increased the positions of gig-workers with hundreds of thousands. The levels of unemployment have increased, causing up to 40 million people to apply for unemployment benefits.

The jobs are also exposing them to the risk of parking tickets and charges for delivering alcoholics to minors. Additionally, with their bikes and scooters, they are required to maneuver in the city, which can be another risk of breaking the traffic rules.

For instance, Sherri Tucker, who works for DoorDash in Decatur, Ga., says that she has noticed that the job entails more risks than rewards. Having worked there for less than 6 months, she recently paid more than $100 after finding her car booted amid George Floyd demonstrations in Atlanta.

She was sad because to recover the loss, she must work 2 days for DoorDash. With the new rules limiting contact between customers and drivers, she feels more insecure because that means she ought to park illegally to rush to someone’s door. She works with her fingers crossed that she may not get booted again.

DoorDash has been working to resolve the parking menace that couriers complain regularly. They conducted an experiment in Washington, D.C., to allow drivers to reserve a curb space for drop-offs. This will help significantly in congested urban centers.

The demonstrations and the pandemic have made the company transfer the responsibility to workers to understand the laws and risks associated with their jobs, as described by Bryant Greening, the lawyer, and co-founder at Legal Rideshare. This law firm is representing ride-share drivers and passengers.

“The big fish should take up those steps rather than pushing them to the small guy,” Greening continues.

It is expected that Uber, DoorDash, and Caviar gave notices to the drivers and couriers about the curfew and other restrictions imposed to prevent instances like the one that involved NYPD.

The DoorDash and Caviar instructions to New York couriers said, “If a police officer or other public official stops you from providing delivery services, please show them this advisory linked below.” It included a posting to show they are exempted.

The spokeswoman for DoorDash said that the company offered the guy in the incident in New York financial, legal, medical, and mental support. She says that they later discussed the issue with the city officials to avoid such happenings again.

Kayla, the Uber spokeswoman, said that the company had asked the NYPD and the mayor’s office to remind the police officers of couriers’ status as essential workers. This was after another incident of food couriers being arrested. She added that Uber had covered all the arrested drivers’ legal needs.

This risk is bigger for immigrants and people of color who make up the largest portions of the gig workers in New York and San Francisco. In a study done in 2018, 90% of the drivers for the New York Taxi and Limousines were immigrants.

This push and pull between the Companies and the legal officers are not new. In 2014, Uber was setting up in Portland, Ore., when the Portland Bureau warned the drivers that they could risk civil and criminal penalties. Uber, in another instance in California, had started its operations before getting authorized, and the drivers had been operating illegally. The company had told the drivers to ignore the regulations and make pickups at Bay Area airport even before they were authorized. Uber and Lyft had agreed to cover the fines as the media reported then.

In a recent report by The Post, UberEats software had allowed drivers to deliver alcoholic drinks to consumers without seeing their IDs – attracting them to criminal penalties.

Another driver in California dropped off a soup container to a customer, after which she was immediately surrounded by police officers charging her for selling alcohol to a minor. Feizi, 28-year-old, who was delivering for DoorDash, argues that she did not know what was inside. “I can’t taste it. I can’t open it. There’s nothing written on a soup container that says ‘margarita.’”

In response to that, John Carr, the spokesman for the California Department of Alcoholic Beverage Control, said that the department doesn’t aim at the gig workers. “ABC does not want to cite the delivery drivers as criminals because we empathize with all who are working during this pandemic to provide services to the public. However, ABC will not stand by and allow alcohol to be delivered to minors.”

The DoorDash spokeswoman, McCormack, said that the company called Feizi to offer legal support to her. “The soup container was tagged wrongly in the app,” she said, adding, “It should have been labeled as an alcoholic drink.”

Worried Feizi, hired an attorney to fight the charge. She is worried that the offense might affect her employment years to come.

With many taking it as a ‘common’ occurrence, there is anxiety for the unprecedented interactions of the gig workers versus law enforcers. No workers want to face any charges because a single charge may cost a day’s or two earnings like for Sherri Tucker.

In Derrick Baker’s situation at San Francisco, he was pulled out with passengers after traveling over Bay Bridge into the city for not wearing a seatbelt. The citation, by which he acknowledges, cost him $160.

When caught up in any infringements, you start counting a loss of a day’s pay or a day-and-a-half pay,’” he said.