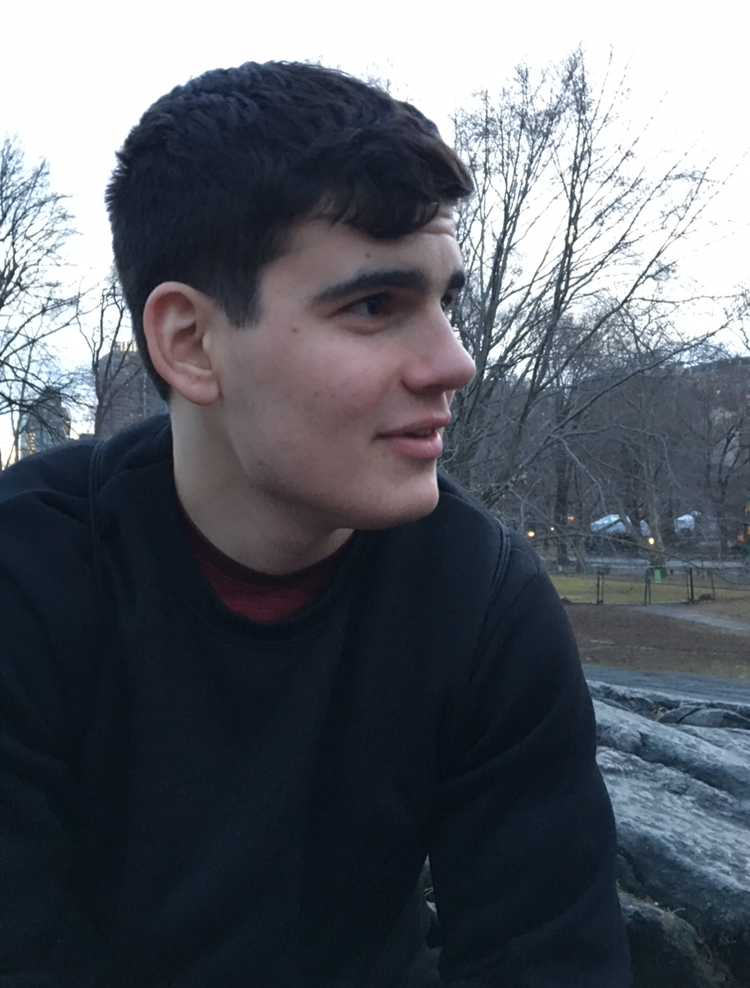 Griffin Kapelus was born and raised on the Upper West Side of Manhattan. Some of his favorite childhood memories are a visit to his Dad’s childhood city of Cape Town, South Africa, a journey through the Pacific Northwest, and a trip to Argentina.

While his Dad worked in the world of business, his Mom worked for the Goddard Riverside Community Center for most of his childhood. She still works for the same program today which focuses on providing free tutoring to families and children who could not otherwise afford it. Griffin Kapelus often spent time after school doing homework in her office, and seeing the workings of a non-profit community center was an impactful experience for him.

After high school, Griffin Kapelus found himself volunteering quite a bit, which he attributes to the social work he saw his Mom doing throughout his childhood and teenage years.

After a few years, he began taking classes part-time at Hunter College. Griffin Kapelus took two classes to start, and both created lasting impressions. The first allowed him the opportunity to write an argumentative paper on gentrification and displacement in Harlem, which coincided with his developing interest in urban issues and inequality.

The second class was Approaches to Religion and it was a truly incredible experience, provoking some of the deepest reflections in his life, thus far. This was the time where Griffin Kapelus began to think about what lay ahead for his career in the long term. He started to be a bit more aware of his intellectual and academic interests and learned more through reading about the many topics in the realm of social issues that he knew he cared about but had never explored before. During this period, he began to grow the interest in an intersection between academics and the world around him that he sees in himself today.

After transferring to The University of Vermont during the COVID-19 pandemic, he further explored his academic interests through new classes. A geography course on race and ethnicity in the United States further solidified his interest in the academic exploration of social issues, but he also felt a desire to contribute to solving those issues that he was exploring in the classroom.

The pandemic was so destructive to so many lives, and with his previous experience volunteering, he felt like it was a good time to do so again.

Griffin Kapelus started volunteering at West Side Campaign Against Hunger, a food pantry in New York City. As a volunteer, his role was fairly limited at first. As his time there continued and he took on additional hours, the role grew. He began to spend a lot more time doing the client-facing parts of volunteering. Interacting with people, some of whom had been food insecure for many years, and some of whom needed this service due to the economic collapse brought by COVID-19 was an incredibly impactful experience. He was undeniably aware of how much need was out there, but it felt powerful to be contributing to solutions, even in his limited role as a volunteer.

After moving to Burlington, Vermont to continue his studies at the university, Griffin Kapelus began volunteering at an organization called Feeding Chittenden. It was focused on tackling food insecurity in Chittenden, the county in which Burlington resides. He found it to be a really interesting contrast to the larger-scale operation in New York.

He also took a job at a homeless shelter in town. It was his first time as a paid employee doing social work, and he had far more responsibility than he ever could in a volunteer capacity. It has corresponded with an even greater appreciation of this socially important work: the ability to interact in a more significant way with the homeless population in Burlington has brought a deeper and more nuanced perspective of related social issues than he could get in a classroom or as a volunteer.

Griffin Kapelus is focused on continuing both his volunteer work and his job at the homeless shelter. He looks forward to considering his academic interests in real-world scenarios.

We had the opportunity to sit down with Griffin Kapelus and hear his insights into how we may be able to better handle these issues as a society.

Are things getting better or worse for the homeless and hungry in Vermont?

While the general improvement of the economy since the worst of the pandemic has surely helped, homelessness and hunger remain real issues in Vermont. From my admittedly limited perspective, I genuinely believe things are improving, albeit very slowly. The pandemic helped to speed up necessary changes to the status quo approach to homelessness and hunger, but the issues themselves are still extremely prevalent.

Several positive steps were taken at the height of COVID-19, but there has been some desire to regress to the norm now that vaccinations are up. I imagine 2022 will be a critical juncture in either building on the social services lessons of the pandemic or reverting to the status quo. I of course hope for the former.

The problems of poverty, homelessness, and hunger seem insurmountable.  What specific steps do you think the government and private organizations can take that would have the strongest impact on solving these problems?

I’ll start by saying that my answer is certainly not that of an expert. I am extremely proud of the work I do both in my job and as a student, but I know I have a lot to learn before I can truly say that my answers hold significant weight.

To completely solve problems like poverty, homelessness, and hunger would, in my opinion, require a pretty major shift in the way we operate our government, economy, and society at large. There are certainly smaller things that can bring incremental progress.

I think a great start in the current moment would be to lock in the use of old hotels and motels as the standard model for homeless shelters, which is a piece I alluded to before. It does give a platform for people in the homeless community to begin a path to independence.

In the realm of hunger, it would be incredibly significant if the government were to continue supporting some of the genuinely beneficial food programs created during the pandemic. For example, I gave out boxes that were part of the Farmers to Families Food Program created by the United States Department of Agriculture. Food that would have likely been thrown out due to supply chain disruption was purchased by the government, and given out to families struggling with food insecurity. The program has since ended, but I would like to see it present even as the scenario around COVID-19 and the economy improves.

How has COVID-19 impacted your organization?

COVID-19 has impacted not just the organization I work for, but really the conception of social services as a whole. The pandemic undoubtedly increased the need for social services when people lost their jobs and faced health challenges that nobody could have predicted.

A change in mindset can be seen in both the approach to homelessness, and there is now a recognized need to change the approach of shelters. Prior to the pandemic, they were large, congregate spaces with little privacy and often minimal access to additional, potentially useful services.

The pandemic, with its social distancing requirements, saw hotels provide a practical answer as temporary housing because they were not being utilized by tourists at that time. Unsurprisingly, providing stable, private spaces to the homeless community that could be used throughout the day, and not just at night, was extremely beneficial. With the stability provided by a consistent place to stay, people were better able to access additional services, and take steps toward independence.

My current work with the homeless population takes place in one of the many once-failing motels that were taken over and now serve as a more dignified homeless shelter that is far more effective in connecting people with social services and lifting people up.

Chuck Quinton on Learning the Fundamentals of Golf