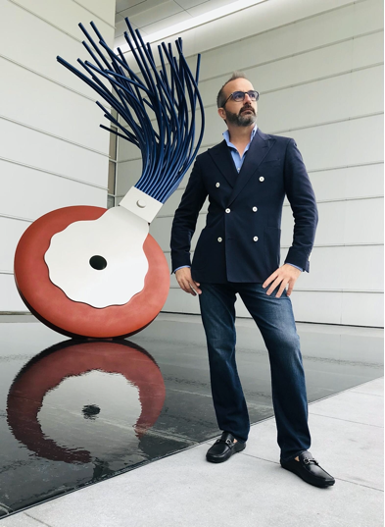 Walter Lindor once said that “products are made in a factory, but brands are created in the mind.” And how right he was, given how our world is layered upon brands, held up by legally enforceable contracts. In today’s digital age (and now with a global pandemic on the rise), having a strategic branding plan is arguably the most important aspect of a business’ survival.

In this case, Hollywood’s entertainment industry. A brand is a voice and a product is a souvenir, Lisa Gansky, co-founder and CEO of Global Network Navigator and Ofoto once stated. But how does product placement in today’s Hollywood films and TV shows play into consumer’s taste and desire to rock the most luxurious products?

We spoke with Hollywood branding executive, Lorenzo Rusin, who with over 25+ years of experience in the entertainment industry, has worked on films including, but not limited to The Irishman, Terminator: Dark Fate, The Bucket List, The Real Housewives of Palm Beach, and now Coming 2 America.

Following arguably one of the most genius, yet accidental marketing mishaps in the history of branding, it has forced executives like Rusin to really hone in on how to properly effectuate the placement of high luxury products, including eyewear, automobiles, watches, among countless others.

Back in May 2019, during the airing of the final season of HBO’s Game of Thrones, one of its episodes made for one of the most shocking marketing phenomena to date–what appeared to be an out-of-place “Starbucks” cup, was basically a $2.3 million free publicity campaign for Starbucks, who quite literally had nothing to do with it, nor knowledge of it until after its airing on live television that Sunday night.

Starbucks of course, took it in great stride, but it did teach a very valuable lesson on product placement. What most people still misinterpret, is that the coffee cup resembled what most of us assumed was the iconic Starbucks cup, but was nothing more than a cardboard takeaway cup provided by the set’s craft services, which serves drinks and food to the cast and crew.

But Rusin, who represents very high-end watch companies, eyewear brands, and automobile manufacturers, what does it take to “properly” place a brand?

Rusin’s team, before beginning any formal relationship, make sure that all the appropriate legal paperwork and non-disclosure agreements are in place and executed. “Once these documents are signed, this allows us to actually receive the script and discuss any associated materials with the covered parties,” he explained.

From there, the script is physically and/or electronically delivered to Rusin and his team, through specialized software in which they are able to receive and view the script, digitally. “While every production company operates differently, there are always NDA’s in place to protect all parties. Once we receive the script, it is immediately delivered to my team so they can read it, and we break it down into parts and segments, looking for any and all areas for appropriate product and service identification.”

In a recent interview with True Hollywood Talk, Rusin shared insight as to the effect today’s technology has on branding in 2021. “It’s a really great question, because today with the ways in which we are absorbing content, primarily through digital streaming platforms, brands now have the ability to ‘live’ forever,” he told True Hollywood Talk. “Brands are forever immortalized in these works; a simple placement is all it takes…but it needs to be tasteful.”

Rusin, who also works with Austin-based Hollywood media consultant, Andrew Rossow, emphasized the importance of the Gen-Z and Millennial demographic, who are considered to be the “consumers of the future.”

“The taste in which today’s younger generation has in entertainment changes by the day,” Rossow described. Rossow, a practicing internet attorney out in Ohio, runs AR Media Consulting, a media consulting firm that specializes in helping the everyday entrepreneur tell their story. “You don’t have to be a Hollywood or Silicon Valley executive to share your insight. Today’s media, unfortunately, leaves space for only those stories meant to create chaos, panic, and information that really is either manufactured or extremely exaggerated. But what about the value of industry leaders, like Rusin, who have helped shape the very content we so desperately crave through platforms like Netflix, AppleTV+, Paramount, Peacock, Disney+, HBOMax, and so on?”

Rusin, who regularly works with watch companies, also enjoys working with eyewear and sunglasses companies, because they seem to be easier for the average consumer to see. “There are some sunglasses companies, without knowing right off what the brand is, that just by their design or certain distinctions, leave strong hints to the consumer on what the brand actually is. Why? When you see these brands front-and-center, they’re usually on the face or immediate arms of the actress/actor wearing it.”

The Thrones mishap back in 2019 was genius, according to Rossow, who believes that whether or not it was accidental, it now allowed Starbucks to hold a “forever” title and association with Westeros and Thrones. “That’s publicity you can’t buy anywhere…literally. Excitingly, with films like 007: No Time to Die and Coming 2 America due out in theatres, considering any extra delays due to the COVID-19 pandemic, we can expect to see a number of highly reputable and luxurious brands all over the screen. I encourage you to test yourself and see just how many brands you recognize right off the bat. You’ll be surprised as to what you already see on a daily basis.”

The Future of Fitness: Occlusion Training and VOTWEAR