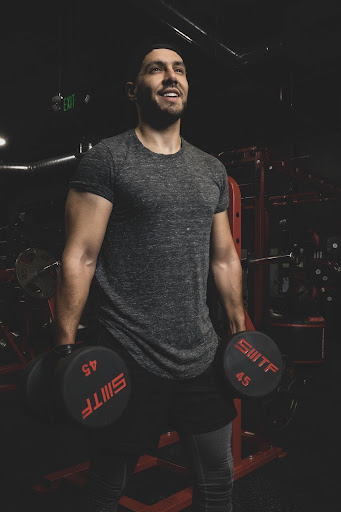 Aziz Kaffel, 29, has been in several places around the world in search of his true calling. Born and raised in Tunisia, North Africa, he studied in a French high school for most of his life before going to France to pursue a law degree.

But three years later, he felt unhappy and unfulfilled. He decided to burn the bridges and go to America. Los Angeles was his first destination of choice.

Little did he know that it was in the United States that he’ll find the missing piece that he was looking for.

“One day, I was driving my old car by a gym that intrigued me. I stepped out of the car and asked if the owner could give me a job at the desk, I just needed a job to keep my dream of staying in the US alive,” Aziz said.

However, no jobs were available at the time but the gym was giving internships to those who were willing to learn.

Aziz jumped on the opportunity and worked for the gym owner who became his first mentor for a year, all for free. By 2019, Aziz left the gym and started working for various commercial gyms like 24 Hour Fitness, LA Fitness, and Anytime Fitness.

The Tunisia-native was able to quickly learn on his feet and build a client base.

In 2021, he took the risk again and started his personal training business in Long Beach, California. In less than three months, he made his first five figures from his growing business.

According to Aziz, the main thing that helped him grow his brand was partnering with other people and companies who fill in his weaknesses and are ahead of him in some key areas.

“I leverage others’ talent, use the internet, social media, and sales funnels as a medium to reach clients. I learned modern sales approaches from top salespeople and started closing leads and making them clients,” he said.

By staying flexible and confident in his skills as a business owner, Aziz has managed to build a growing six-figures a year business while helping countless people in his journey.

As he continues to build his brand, Aziz envisions opening his own facility in Southwest Los Angeles and deliver the best customer experience there. His other goals include releasing his first book called Insight Nuggets: 101 Crispy Pieces of Wisdom To Level Up Your Life and opening a second location for his gym in his home country.

World Leading Breathing trainer, WELLO2, Helping People Across the World to Reduce the Impact and Gain Control of Asthma