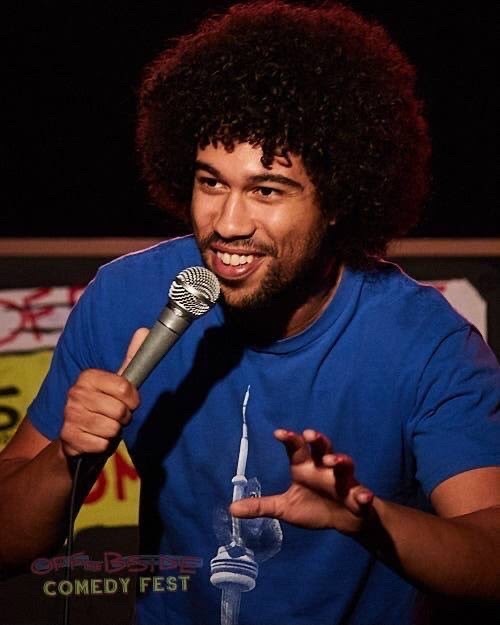 Haitian Canadian comedian Che Durena was born and raised in British Columbia and is based in Toronto after spending time performing standup in Mexico. He is best known for his work as a host and writer for My Most Amazing Top 10 (over 6.7 million subscribers), a content creator with Herb (14 million followers) and he has amassed a social media following of over 2.9 million with 48 million likes on his viral TikTok rants and commentary. Che has appeared on JFL All Access, Comedy Network, CraveTV  and recently dropped his debut comedy album Tales From My Butthole. His comedy offers an absurd angle on his experiences living abroad and his perception of matters like culture, race, relationships and drugs. Catch him on tour in a city near you!

Depending on the industry, making a name for yourself can have different levels of difficulties. In an industry that is tough to climb, Che was able to achieve this by beginning in the open mic standup scene in Toronto. Through stand up he was able to build his skills as a performer, this led to him working with online media companies like Most Amazing Top 10 and Herb. Eventually he was able to get an acting agent, and with the use of his money from booking commercials, he hit the road. Durena then mentions “My biggest boom came during the pandemic, there was nowhere to perform standup so I turned my attention to doing TikTok.”

When Che had made the strong decision to focus on standup, he was living abroad with very little money. He had to make the difficult choice of either moving to Toronto with nearly nothing while knowing nobody, or to move back home with his parents. He took a tremendous leap of faith and moved to Toronto, settling on chasing his dreams. Although, once he did move to Toronto he stayed in a youth shelter for the first 6 months there, just until he had enough money to move into his own place.

In order to overcome these hard times, Che just had to put his head down and work hard. He states that the whole time he was staying in the shelter he let others know he came here to focus on standup. So while he would work during the day, he would go out at night to do shows. Durena then adds that the shelter had a curfew, but they would occasionally let him break the curfew so he would be able to do open mics.

Che is so unique within his niche because he has a very absurd sense of humour, along with that he also does not hold back on what he has to say. The biggest comment he gets when it comes to his comedy is that he has no filter. Durena knows what topics he wants to talk about whether they are taboo or not, he wants and will talk about them.

In conclusion, Che is very passionate about standup. He took a risk many others would not have in order to pursue his passions. Thanks to his skill and life experiences, he was able to overcome tough times and improve not only his career, but himself as well. Che is a very genuine man, as he never sugarcoats anything and stays true to himself in every aspect.

How Neeley Neal Is Disrupting the Cheer Industry & Empowering Women