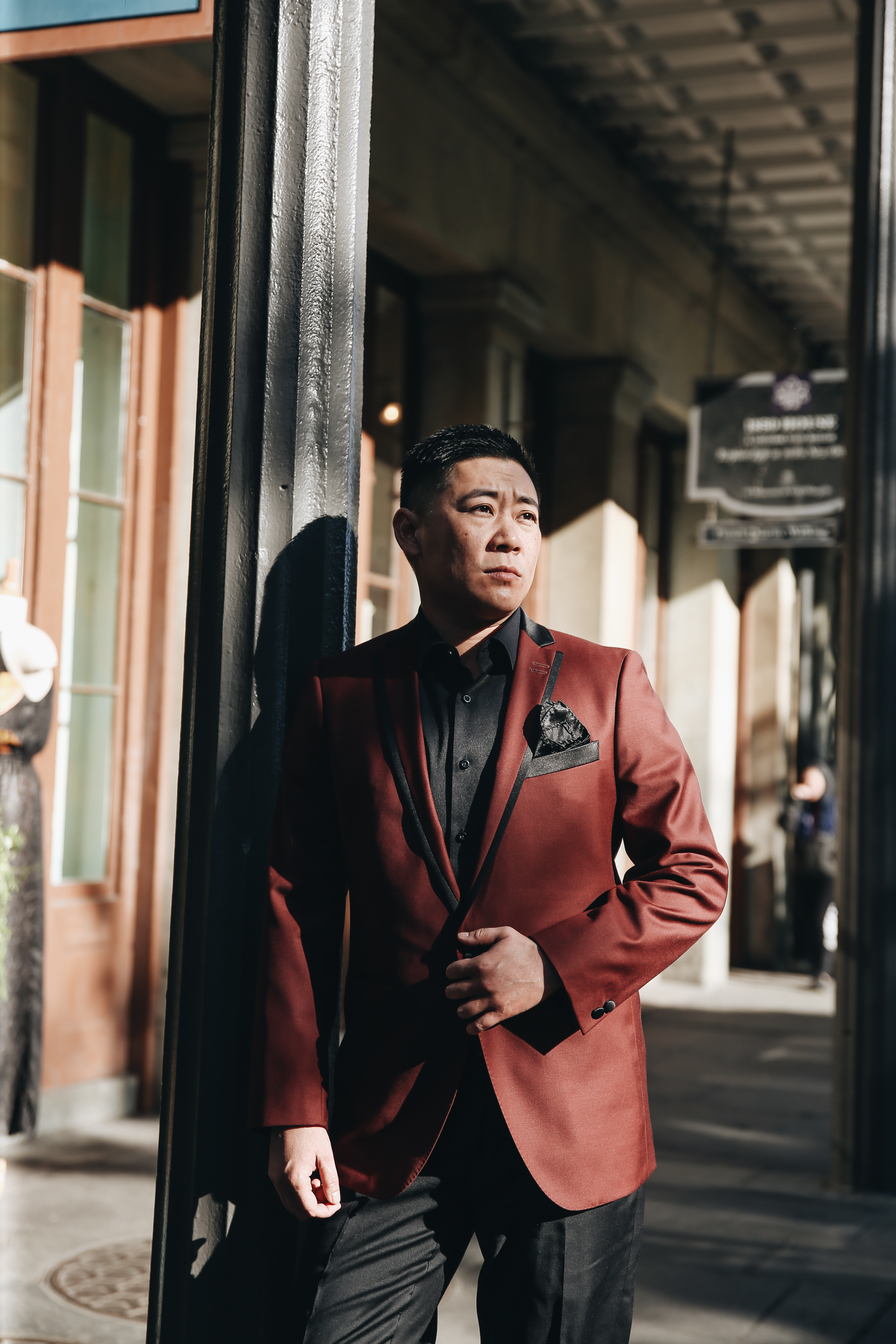 Leon Elias Wu, a Taiwanese-American trans man and founder of Sharpe Suiting, has created quite the stir in the contemporary fashion world. And we are all for it. Wu found his niche market in 2014 within the fashion industry – queer fashion – and was determined to make his mark and radically shift the world of fashion into a more inclusive space for clients within the LGBTQ+ community. Recognizing that he could combine his love of fashion and his passion for the LGBTQ+ community, he found a unique opportunity to create a challenge to gender norms and how they show up within style.

Sharpe Suiting provides luxury fashion to marginalized communities focusing on those that identify as women, masculine of center and butch lesbians/women, transgender, gender nonconforming, and non-binary. By embarking on this journey, Wu is continually building a brand centering around visual activism through fashion.

Performing as a Drag King, and participating in the styling, costuming, and choreography for 15 years, Wu learned how to specialize in styling masculinity. “Female assigned at birth, I always felt masculine, wide shoulders. When I was little, I felt like a boy,” shared Wu. “Then, during the traumatizing years when I was trying to fit in with what people around me wanted me to be, I had to learn feminine style and dress as well.” His experience with pledging a sorority in college helped him understand the basics of how to style for femininity, coming in handy later in designing for celebrities like Laverne Cox and Martine Rothblatt.

Wu As A LGBTQ+ Changemaker

Wu is becoming a changemaker when it comes to breaking through in the LGBTQ+ fashion space. Gay cis men have always had a place in the mainstream fashion world, and now Wu is using his knowledge to further expand this to facilitate lesbian, masculine of center women, agender non-binary, and trans inclusivity. “The fashion and entertainment industries define beauty and sex standards,” he says. “And, today, we see more diverse representation in these spaces, thanks to brands like Sharpe and their visual activist comrades.”

Traditionally, beauty and style standards are the landmark in the fashion and entertainment industries, and currently, it is very limited in capturing humanity. Wu believes there’s so much beauty in this world that goes undefined. “People have yet to see it due to lack of visibility,” he says. When Wu first started his company, he wanted people who identified similarly to him (masculine of center, androgynous, transgender, gender nonconforming) to be visible and also be seen as sexy or desirable by the zeitgeist. Not only has his dream developed to bring more visibility to similarly identified people, but it has also brought much visibility to other marginalized groups.

“For the past several years, Sharpe Suiting has put these underrepresented LGBTQ+ communities, more POC, body-positive folks, and disabled people on the runway,” says Wu. “If fashion is about identity, then companies like Sharpe and its peers are fulfilling a need for so many underrepresented people.” He wants brands to continue to become more representative of everyone. “If you are only marketing to those who buy men’s or womenswear traditionally, you are missing out on a substantial (and meaningful) opportunity.”

Wu wants to help other entrepreneurs become more inclusive in his industry. The best way he recommends leaders to do this is by ensuring that their teams embody diversity and inclusion. He says to ask yourself: “How many women, how many POC, how many LGBTQ+ people are in your leadership? Gone are the days when any company can say that there are not enough qualified leaders within these underrepresented groups.” By having a diverse company, your business will house more opportunities for innovation and growth.

The Future of Sharpe Suiting

Within the next five to ten years, Wu hopes that Sharpe Suiting will expand globally to London, Milan, and, eventually, Asia. His business strategy for global expansion is not solely a financial ambition. It has been and will always be activism first. Finally, Wu would love to branch out to the bridal world, hoping to give brides a choice of gorgeous gowns or suits. His team is also already working to create representational transformation in the entertainment industry, athleisure wear, and gender-inclusive uniforms (college, military, etc.)

Characteristics and Advantages of IPTV