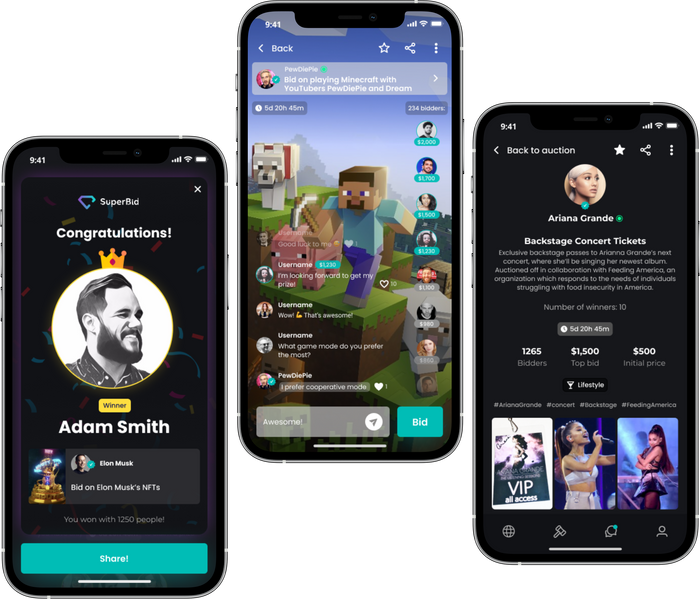 We recently sat down with SuperBid’s Founder & CTO Wojciech Sobczuk, and Maxwell Gross COO, on how this social auction app is disrupting the way we look at social media.

At some point in life, we’ve all probably dreamed of opportunities where we get to rub elbows with celebrities and influencers or be the proud owners of unique items that will leave others in awe. Achieving all would certainly be a dream come true.

With SuperBid, an upcoming social auction app that uses cryptocurrency, users can get a chance of a lifetime and win rewards such as one-of-a-kind art, unforgettable experiences, and more.

Even though the app is still in its beta stages, it’s already gaining recognition from users everywhere since it presents them with a way to make even some of their wildest dreams come true.

Bringing celebrities and influencers into the mix is one thing that makes SuperBid stand out as a social auction app. It’s even currently endorsed by Natalia Janosze, an actress and model. She has starred in many Bollywood and Hollywood films, including 365 Days, a hit movie in the past year.

As the app works to create more partnerships and increase its leverage in the market, its developers are also constructing a platform where celebrities and influencers can also auction NFTs.

Recently, NFTs have been a popular topic in the mainstream media since artists, and other users alike can use the power of blockchain to earn a profit online without having to worry about getting swindled.

Users can make their bids using cryptocurrency from select crypto wallets to make the process faster, more efficient, and worthwhile since everyone can participate in auctions.

Giving Back To The Community

Once users have invested their hard-earned cryptocurrency coins, there’s another phase to SuperBid’s plan, one that involves giving back to the community.

Since the app will function as an online auction room that uses modern currency to make a profit, the developers are making sure that once auctions are closed on the app, a portion of the proceeds will be donated to charity.

This is because a critical pillar of SuperBid is to give back to the community by offering charity programs that users and influencers can choose from.

When SuperBid officially launches, users will have a unique auctioning experience that will allow them to make their dreams of owning NFT art and collectibles, once-in-a-lifetime opportunities, concert tickets, and more! They will also get a chance to give to the community, making it a win-win situation for everyone involved.

As SuperBid counts down to its official launch, get your crypto wallet ready and watch out for what else it has to offer.

What Is This Shiba Inu Cryptocurrency

How To Buy an NFT (Step By Step Guide)