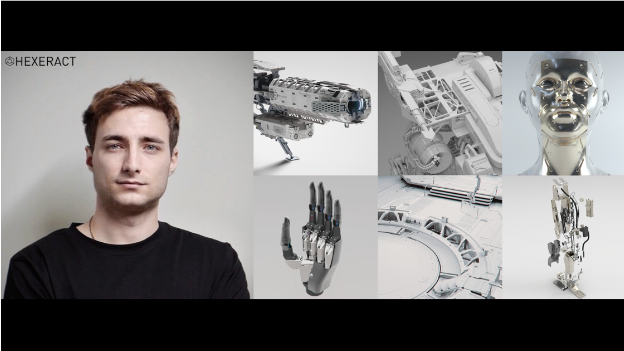 It is no news that digital creators in the recent past have leveraged the power of blockchain to create a whole new art scene.  The NFT craze has clearly touched a huge nerve within the art world. Despite the fact that there is still a lot of misunderstanding about what NFTs are. The term “non-fungible token” refers to a digital asset that is completely unique and is recognized or validated as such on a digital ledger, or blockchain. An NFT cannot be swapped for another NFT (the way one dollar bill is equivalent to another, or one bitcoin has the same value as another). As a result, it can be used to digitally formalise ownership of items such as artwork. The concept is simple, yet it has sparked a lot of controversy.

And amidst all that is HEXERACT, a renowned NFT artist who has gained much recognition in the industry for his unique ability to  blend art with technology and create masterpieces.
He is an award winning creative director and designer, known for pioneering industrial design, and robotics design. One of his  robotic design- UNIT 06-T9 became viral online in 2013 and was the cover of various 3D magazines.

Now what separates HEXERACT from the pile of numerous NFT artists is the fact that not only he has become one of the leading artists in the sector, he has also been able to earn over half a million dollars selling NFTs of his 5 artwork pieces in the span of a few months. The art covers the themes of entropy, the universe and existence. It combines robotics and surrealism.

His artwork is mostly available on one of the most premium marketplace for art – SuperRare. It is a marketplace where you can buy and sell one-of-a-kind, limited-edition digital artworks. Each piece of art is generated by a network artist and tokenized as a crypto-collectible digital commodity that you can own and trade.

“The ability to be able to sell something for which you get paid 1:1 in a relationship that is directly, artist to collector that generates pure profit for the artist, is appealing to many artists. Artists have long been taken advantage of by the entertainment industry and it’s a beautiful thing to see artists being able to take their control back. Artists provide IPs and generate culture, they often generate billions of dollars in revenue of which they never see the fruits”

The most recent art piece by HEXERACT is called – DE FUTURIS TECHNOLOGIÆ which is currently displayed at the prestigious Permanente Museum in Milan, Italy with other major NFT artists such as Beeple, XCOPY, Pak, Dangiuz and more, among masters of the past, such as Caravaggio.

In the upcoming future, HEXERACT aims to create more such artworks and disrupt the NFT industry with some projects he told us, he can’t disclose quite yet but he can’t wait to share with the world.

Brooke Goldner, MD, on Chronic Illness & The Power Of Nutrition