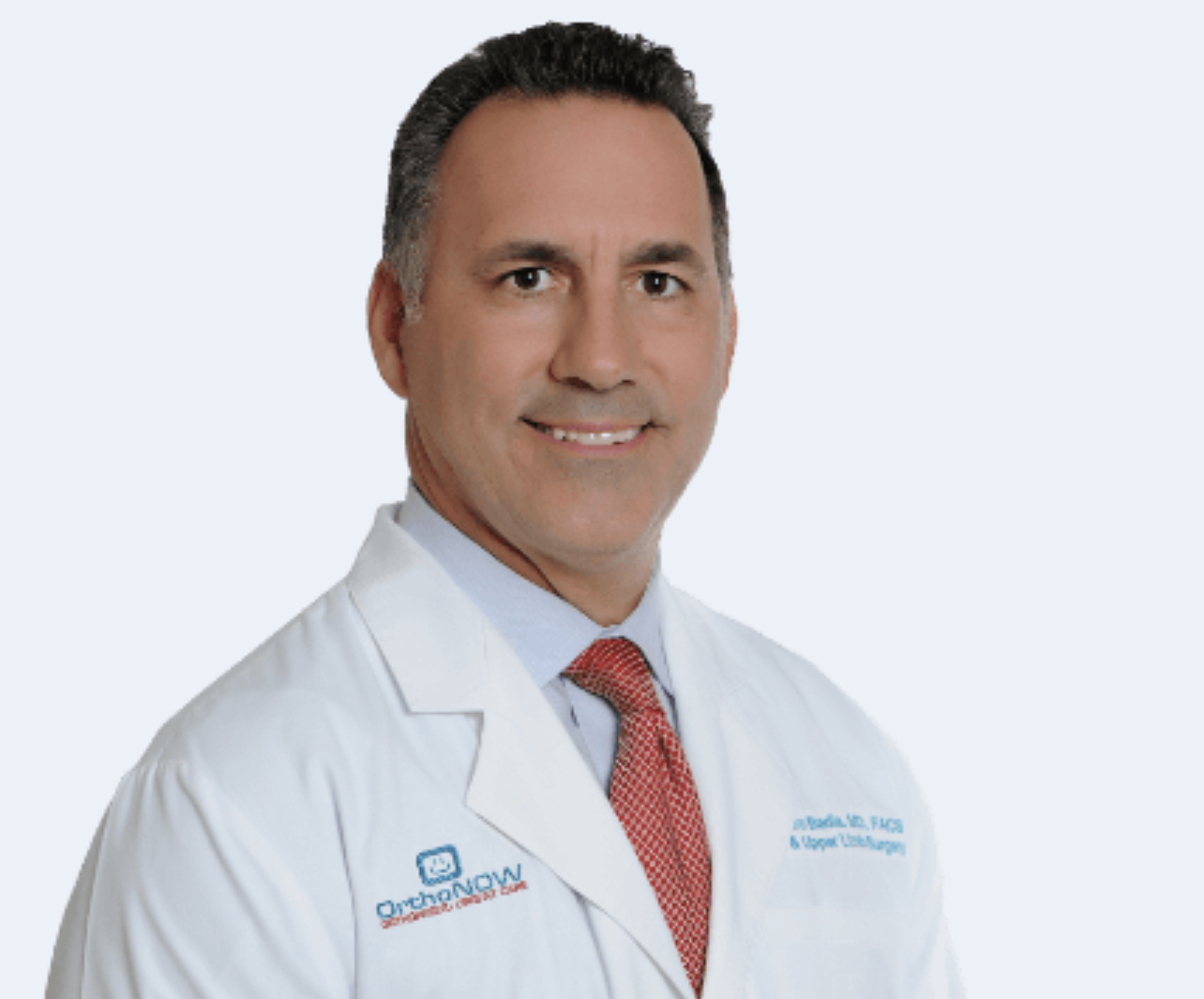 Dr. Alejandro Badia had a long history of medicine from his family in Cuba. As an immigrant kid in New Jersey, he was partly raised by my grandparents, who lived adjacent to him since his parents were doing what he calls “the immigrant shuffle.” “My parents were working long hours, and my dad was restarting engineering school at NJIT in Newark,” said Badia.

“I spent much time with my paternal grandmother, from Valencia, Spain, who had truly debilitating rheumatoid arthritis. I recall when she had her knee surgery (I think a replacement) and later, when I was only eight years old, accompanied her and my grandfather to see a hand surgeon in NYC at Columbia-Presbyterian.”

This hand surgeon turned out to be Bob Carroll, one of only two hand surgeons at that time since it was a burgeoning specialty. “Well, 20 years later, I learned that my main mentor, Joseph Imbriglia, would later train under this mentor. Dr. Carroll was essentially MY grandfather of hand surgery.”

That experience was etched in his mind as he read “The Making of a Surgeon” at age 11 and later again at 16 before applying to college premed programs. “Despite my modest public school education, I managed to gain acceptance to Cornell, and the rest is history,” he said. “I was involved in a research study at Cornell Med in NYC, where I had to perform microsurgery on a rat carotid artery. I realized I had an affinity for working under the microscope. Later, while at NYU med, I saw that Orthopedics was the specialty that best suited my personality: fast-paced, the ability to truly cure people, and undergoing a major wave of innovation. There was also an affinity to fitness and sports suited my lifestyle”.

During his surgical residency at the famed Bellevue Hospital, where the author of “Making of a Surgeon” book also trained decades earlier, Dr. Badia confirmed his specific interest in surgery of the hand.

Emergency Rooms Are Not Always The Answer For Emergencies

After years of experience in the field, Dr. Badia concluded that sometimes a traditional emergency room could cause more harm to a patient than good when helping them with an orthopedic injury.

“The problem with emergency rooms is that they are not ideal for fewer injuries or certainly complaints of joint pain, for example,” explained Dr. Badia. “They are focused, as they should be, on treating that patient with chest pain, asthma attack, or anaphylactic shock, for example. They are well suited for major injuries such as a femur fracture or spinal cord injury, but ankle sprains, wrist fractures, and shoulder pain go to the bottom of the triage list.”

The issue is, Dr. Badia explained, that this does not only delay the patient receiving the appropriate expert care from the right orthopedic specialist but in many cases, the diagnosis is missed. This is because subtle issues are not in the domain of the well-rounded emergency room doctor, who cannot be an expert in everything.

And further, “The cost to our healthcare system and society is yet another issue that deserves its discussion,” he continued. “Let’s keep in mind that US healthcare is approaching 20 percent of our GDP. That is twice the rate of the next industrialized country on the list, Switzerland.”

In short, Dr. Badia believes that we must evolve in delivering care for patients and not just focus on the next high-tech advance. And so, he knew finding a sustainable solution for his community in Florida was necessary.

In 2010, Dr. Badia’s frustration with the health care system sparked the idea for the creation of specialized orthopedic urgent care centers to efficiently assess and treat a range of orthopedic and sports injuries. OrthoNOW is an immediate orthopedic care center where everything from acute injury to pain is addressed in virtually any musculoskeletal condition.

The few exceptions are major injuries in patients who cannot ambulate, such as a hip fracture in the elderly. While OrthoNOW is certainly not “new,” in terms of ideas, Dr. Badia still had to be quite innovative in creating community engagement and facilitating a behavior change.

“The problem has simply been that the local hospital systems have no interest in this succeeding, and even the insurance companies, who most stand to benefit due to cost, are not engaged since their salaried employees are not interested in change,” explained the doctor.

“However, I founded this concept because nearly every patient who saw me in my hand and upper limb practice, Badia Hand to Shoulder Center, had been somewhere else first- and that place did very little to diagnose the problem, let alone fix it. This includes the primary care doctor, general urgent care, and the busy and expensive emergency room.”

“In fact, many times that person would gain an appointment with the recommended orthopedic surgeon only to be told, ‘I do knees but don’t know much about the wrist.'”

OrthoNOW sorts all this out and uses their award-winning app to communicate in real-time to the right sub-specialist as one cannot expect a foot surgeon, knee surgeon, spine specialist, hand surgeon, etc. to all be sitting in a walk-in clinic, waiting for the appropriate patient to walk…or rather… limp in.”

This is a simple concept, yet the public has, until now, failed to grasp it, unlike Uber, Tinder, or some other app from a phone.” This is the reason we recently went to market since a large healthcare company, innovation-minded, is needed to take this national, and even international,” said Dr. Badia.

The Highs & Lows Of Orthopedic Work

Of course, any dedicated professional’s job will come with specific stresses–amplified when that work is centered around human health. But much of the lows from Dr. Badia’s work have more to do with the hurdles to success: “The most challenging part of any American physician’s job is the ubiquitous interference in our decision-making process and ability to practice medicine without barriers and hurdles,” he said.

“Without even mentioning the declining reimbursement, relative to our increasing overhead expenditures, the lack of control has frustrated me the most. I believe my colleagues, leading to the term ‘burnout.’ I can’t entirely agree with that term and prefer to use the phrase, ‘Moral Injury’ as first coined by Boston colleague and surgeon, Dr. Simon Talbot.”

Dr. Badia discusses this in his book, Healthcare from the Trenches. He still hopes there may soon be political will to improve this situation as many physicians are retiring early or extensively modifying their practices, like himself.

“The doctor’s most rewarding part of my job is likely what most physicians would attest to- the ability to truly impact the life of a fellow human being,” says the doctor. “The exceptional cases I have had the privilege to address are always with me, and an insurance executive could never take them away from me. The ability to impact a stranger’s pain and function in a country where they otherwise would not have that access is a cherished privilege. This reason is why many of us participate in medical missions. I have done missions in Guatemala, Ghana, and Bolivia. I am currently organizing one for a European group in Ecuador. GICAM wants me to head their Latin American operations due to my language and vast travel experience to nearly all these countries over the past 25 years.” Like all his professional accolades, Dr. Badia embraces this opportunity.

Here’s How HeartHeaded is Impacting the Conversation on Mental Health