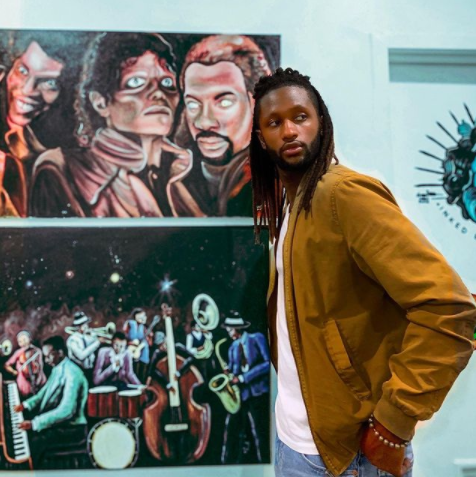 Hey Ayye Moe! Tell us about your background, what has gotten you to where you are today?

“I am from Washington DC. Former professional basketball player. I began to make music in 2018. I began as a rapper but I realized that everybody I knew that was making music, focused on rapping. So I began to learn to sing. The record that really helped me take off was my first singing record “Came to Do” The rest is history.”

“I was playing pro ball. I played ball all my life. The summer after my first pro season I was home just trying to find things to do with my free time. So I think like 2017. Basketball was great but I had reached a point where if I wasn’t getting a certain level of competition when I stepped onto the floor. I was not interested. That’s a big part as to why I did not go back overseas to play.”

“When I came home in the summer of 2017 I went to my brother SatchMoe Art tattoo studio. His studio is connected to a music studio called the Trap Factory. One day we was in there having a good time and we freestyled some random songs together. Nothing serious. Just messing around. But it came out decent. That’s what initially had me thinking that this music life is something I could do. I had a good time making those tracks.”

“So as the weeks went on, I saw more artists come in and record music. I began to think “These people are dope. Maybe I’m not good enough to be a musician for real.” That thought right there was all I needed. When I start to doubt myself, that’s when I know I have to do something. So I said I’m making music. It was a spur-of-the-moment thought that I did not receive much support on at all from friends or family. But it was what I wanted to do so I did it.”

“I used to just make music to make it. Now I want people to be able to listen to my music and I want them to connect my song to an experience they have had or want to have. Whatever that song is speaking about, I want them to be a part of that moment.”

“There isn’t one artist who I would really be astonished to work with. But I would like to be able to study with Trey Songs just to see how his mind works when it comes to making music and putting together albums. He is a legend and still so underrated. His ability to make great flowing albums is something that a lot of people fail to appreciate.”

“I would also love to be able to train and study with Avery Wilson and Stevie Mackey also. Just like in basketball when everybody wanted to work out with Kobe, RIP, in order to learn skills and techniques from the GOAT. That’s how I feel about Avery Wilson and Stevie Mackey vocally. They are amazing so I would like to be able to learn from those three music artists.”

“My new Single  “All of It” will be here next month. My producer is sending it back to me this week and then we will get it out to you all ASAP. My project “One on One” will be coming out in late July or early August.”

“My new music is really different than anything else I have out. I have been working on my voice and studying music. I am getting to the point where I am vocally able to sing the ideas and styles of music that are in my head. This song is really just made for anybody that loves somebody. Once you listen, you should be able to feel the emotion.”

“This project will have something for the guys and the girls. I know it’s my best work yet.”

Your ultimate guide to different types of restaurants