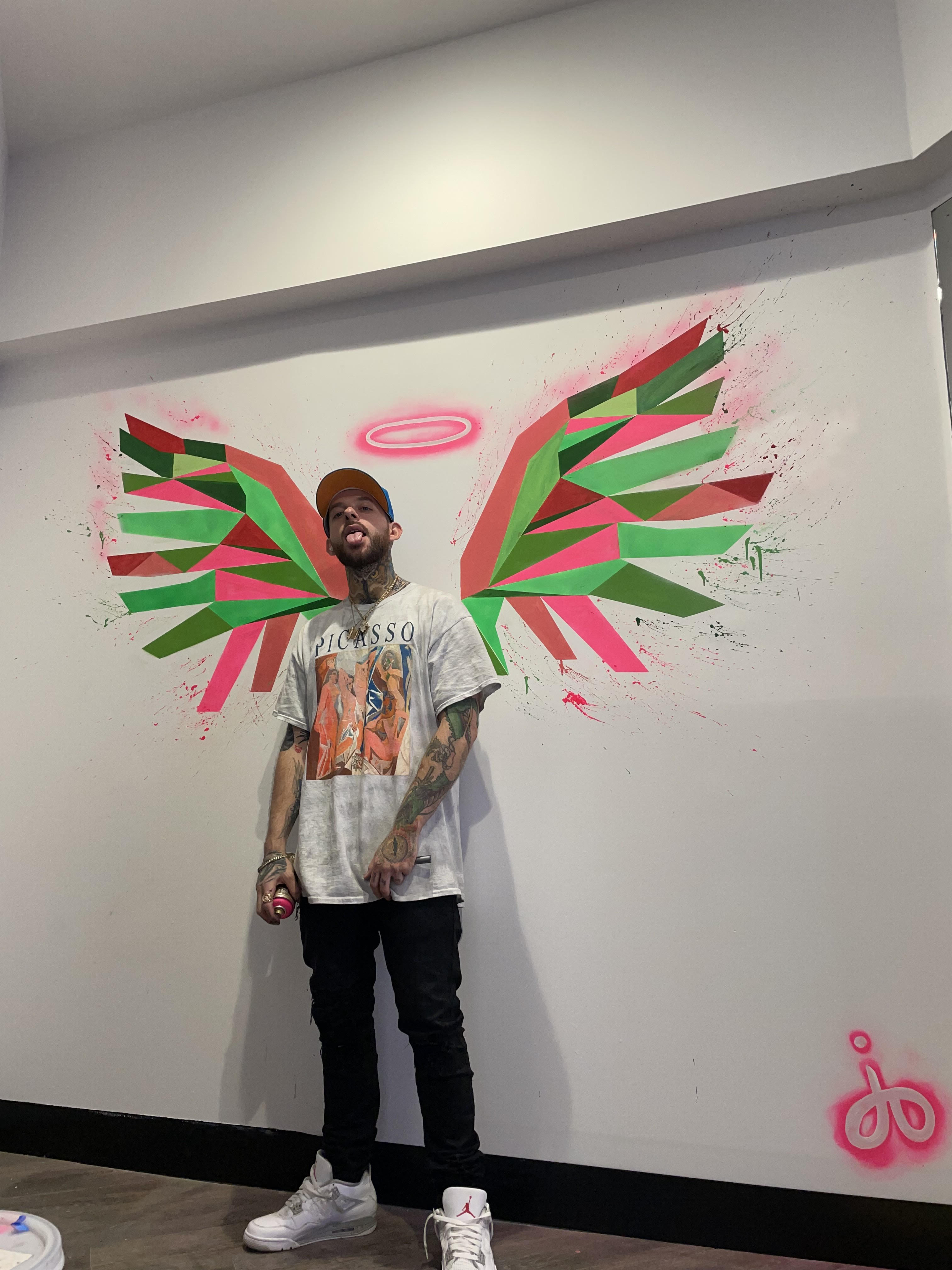 New York City artist J.O. Jerusalem (pronounced “Jo-Jerusalem”) is a visual creator and designer specializing in various types of paint, NFTs, and tattoos. He has the attention of world-famous curators of the Art Basel in Miami, Art Apple NYC, and Redwood Art Group, each of whom has placed his work in their galleries. With a philosophy on art that is not focused on interpretation so much as feeling and energy, J.O. Jerusalem is more interested in trying new mediums and tactics to express himself than creating a magnum opus epitomizing a specific time or place in history. For J.O., history and perception are always in motion and changing in the eyes of the observer; in his art, he operates without the restraints and fears of taboo many cannot help but keep in mind. And the story of the origin of his art showcases how he uses his personality to captivate an ever-expanding audience.
https://www.instagram.com/p/CS3IUgMns6Q/
J.O. went to art school at FIT until he was kicked out. He then opted to continue visual art as merely a hobby. He never thought to create art for monetary purposes until something happened to him 4 years ago. A friend of his told him about an avant-garde gallery called Art Basel in Miami. His friend had seen his art on Instagram and encouraged him to get in contact with their curator. So J.O. loaded his paintings in his 2-door BMW convertible and drove from New York to Miami. When he arrived, the staff introduced him to an art broker named Jason Perez. Perez informed J.O. he was too late for the gallery and could not participate that year – period. On the day of the show, Jerusalem took matters into his own hands: he hopped the fence (along with his paintings) and set up shop at the gallery anyway. His art performed well with the crowd and Perez officially signed off on him to sell his work at Art Basel a year later.
From there, J.O. started making paintings for celebrities and influencers in New York such as Damn Homie, Daniel Jean, Prince Zee, kenstarrrz, DJ clue, Casanova, Trax NYC, Justin Combs, Diddy, and many more. His method of sales was unconventional. Jerusalem made skit videos to build his following. He posted wild, raunchy, and provocative content garnering millions of views, and as his following grew so did client interest. He quickly went from selling one painting every other month to selling one every week.
Just this last January, J.O. decided to abandon his lifestyle of partying and making insane videos. He transitioned to focusing more on paint content and has only seen more success since. He now gets booked twice a week performing his art live and sets up at art shows twice a month. He began making NFTS, dropping two collections and selling most of them in October, and has most recently completed a campaign painting murals across New York and New Jersey.

Specializing in all types of paint including but not limited to spray paint, stencils, varnishes, and epoxies, J.O. is now setting updates for a nationwide paint tour. He is setting up a campaign for his NFTS and introducing them to Art Basel in Miami first week of December. He is also working on a television show. So far, J.O. Jerusalem has found a way to achieve just about everything he has manifested in his mind, and he expects to become the biggest artist coming out of New York within the next two years.
“I think what makes me different is that I’m not just a painter I’m a personality and I’ve always said people don’t buy the art they buy the artist.”
-J.O.
To learn more about J.O. Jerusalem, follow him on Instagram and Twitter, and check out his website and art store.
http://jojerusalem.com
https://instagram.com/jo.jerusalem?utm_medium=copy_link
https://twitter.com/jerusalemjo?s=21
Opensea.Io/jojerusalem
Related Topics:
Up Next

Tyrell Jackson Is Building Something Meaningful