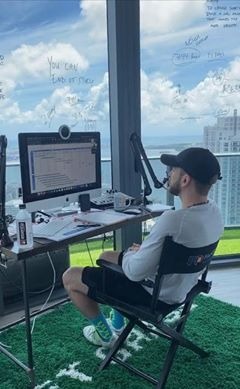 Jack Lee Matthews has always been a big dreamer. Raised in North Carolina, he’s a self-proclaimed country boy. Every job he took, he always worked his hardest to be noticed by those in charge, whether it be folding clothes as American Eagle, making calls for supplements, or working for a big company like Verizon. Despite all his hard work, Jack quickly became restless, and he decided to move out west to California. Although he hadn’t worked as a car salesman before, he knew he’d work to be the best. After working for a while, he learned that the best salesmen understood their customers weren’t just buying a car, they were also buying stories. Then, as it often goes in business, Jack ran into a bit of luck that pushed his career even further.

Determined to be the best in the dealership, no matter what, Jack made sure that every day he got up I felt like a winner and I expected to win. By being the first to get to work and the last to leave, he was able to achieve this, becoming the youngest “Porsche Grand Ambassador” ever, and accounted for $26 million in revenue to the dealership. This realization pushed Jack to start his own digital marketing firm, Go Exclusive. This made him a seven figure income and led him to a new venture, Fansplan, of which he is Founder and CEO. The Fansplan digital residence allows personality-driven brands to start businesses with virtually no upfront cash. Fansplan is where you can be seen, develop a following, and create a revenue stream 24/7 with no out-of-pocket investment. Each personality or enterprise on Fansplan becomes branded, scalable, and transactional. Once a sale is completed, all transactions and payment processing is handled internally by Fansplan and its affiliated processor. It’s fast, simple and eliminates burdensome operational and administrative headaches for its members . Fansplan makes no money until its users make money — it receives a small % on each of their transactions. Jack was able to delve into his new venture because he realized he was being undervalued at his old job. Beyond knowing his own worth, Jack also had a desire to help others. Jack believes it’s one thing to become successful at a young age, but it’s even more exciting to make others successful simultaneously. Jack places a lot of value in watching others gain confidence, evolve, and develop a 24/7 cash flow. Because of his skill and experience, Jack is able to help others, including his family, reach financial freedom, just as he has. Make sure to stay up to date with Jack on his Instagram, and check out his business Fansplan at their website.
Related Topics:Jack Lee Matthews
Up Next

Nick and Stephanie Nwoke are Passionate About Teaching Young Entrepreneurs The Blueprint To Success.