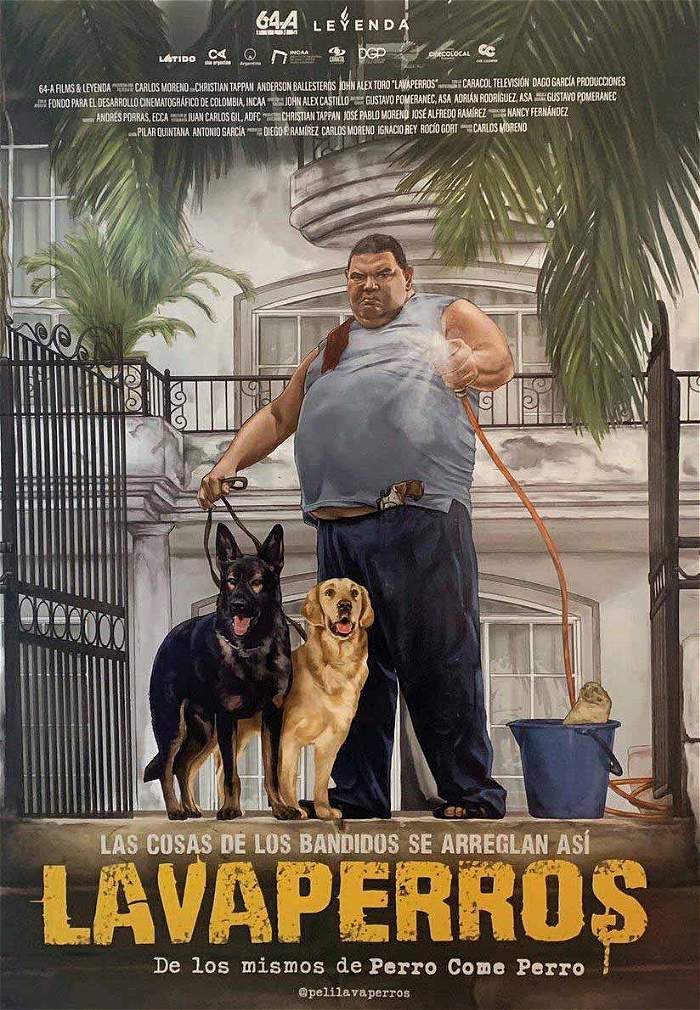 And for those who do not know much about Colombian slang, we bring this brief review where we will put you in context, so you will know everything you need to know about the film, you will be able to understand it and enjoy it. But don’t worry you can read with confidence we won’t spoil you.

First, we have that the movie of the Lavaperros is set in Tuluá, Colombia; and it is a black comedy that describes the world in which the lowest-class drug traffickers or rather Lavaperros live.

“Lavaperros” is a rank among drug trafficking organizations (from Colombia of course) being the last of the chain’s rank, and it is they who have to take care of all the dirtiest jobs that no one else would want to do. However, for this film, the environment and situations have been handled in such a way that it becomes hilarious, even those characters who find themselves in the most absurd situations.

The film Lavaperros is focused on Don Óscar (Christian Tappan) who is the leader of a criminal organization, this subject has a life that goes from bad to worse since our protagonist apparently suffers from infertility problems, but even so he has his wife pregnant, and added to that our protagonist has the slight impression that the neighboring construction workers seem dedicated to guarding his house.

But, we will also see parallel stories that revolve around the protagonist and each of them adds history and importance to the story. Since we will have a couple of somewhat particular policemen, a young gardener who will have a stroke of luck when he finds a small fortune and finally there will be this burly young man who serves as a bodyguard in the house whose name is “Bobolitro”.

Who is Ulises Gonzalez? Born in Havana (Cuba) Ulises already participated in television at the tender age of 6 years and from there he developed, matured, and grew as an actor, managing to perform in many roles and roles, giving him the versatility necessary to reach to instill fear or get a good smile in their performances.

And like many of those who have visited Colombia, Ulises after his arrival in Colombia in 2009 fell in love with the beautiful Caribbean country, adopting customs, accent, and culture. Although Ulises already had Colombian relatives (in fact, his mother is from Cali) that is one of the reasons for his arrival in the country.

But, Ulises remained in his main work, which is acting, in which he trained in Cuban institutions graduating from the Higher Institute of Art and the Univalle de Cali (Colombia) in theatrical specialties.

His studies in Calí had a great impact on his development as an actor in the Colombian territory, since he would later meet many of his colleagues at a point where all of them had acquired great influence. Even many of the actors that Ulises had met was thanks to his work with Mr. Jairo Varela who belonged to the niche group, who at that time had a studio called “niche casting” made up of young actors and models.

And it was there that he got opportunities for programs and opportunities on TV, one of them being the program called “The Dream Repairman” where he dressed as a bear. This being quite impressive in his development because, if he previously dressed as a bear, now we see him play more serious roles such as “Fattyguard” or “Bodyguard”.

This is what we will see unfold in the movie “Lavaperros”, where Ulises plays Bobolitro who is the quietest and clumsiest of the Lavaperros that surround Don Óscar. And although he worked for one of the tough guys, Bobolitro had no greater wealth than his bible (this young man was always looking for redemption), the house guard dogs whom he had to care for, wash and feed; and his great love Nancy (this would be his greatest treasure) although unfortunately, she is a prostitute.

The magnificent performance of Ulises Gonzales “Bobolitro” is accompanied by the direction of Carlos Moreno, who has been in charge of bringing this play to life by capturing the best scenarios and bringing out the best of each actor belonging to the cast.

From the Director Carlos Moreno

Here the director tells us the story of the decline of a Colombian capo. An empire run down and pressured by the next wave of leaders. As a satire, Carlos Moreno tells us the last hours of a decadent leader and his subordinates while the police spy on them and his rival harasses him.

This director had previously impressed us with films such as “All your dead”, “Dog eat dog” and many others. But this time in “Lavaperros” he comes to shock us with the indiscriminate violence that occurs in the country (with a bit of black comedy) in incredible situations where the protagonists are in constant fear for their lives.

It should be noted that this “dog washing” film has been acclaimed and awarded at national and international film festivals. So don’t wait any longer, prepare your snacks, relax and enjoy one of the best deliveries in the Colombian cinema.

Related Topics:ColombiaNetflixUlises Gonzalez
Up Next