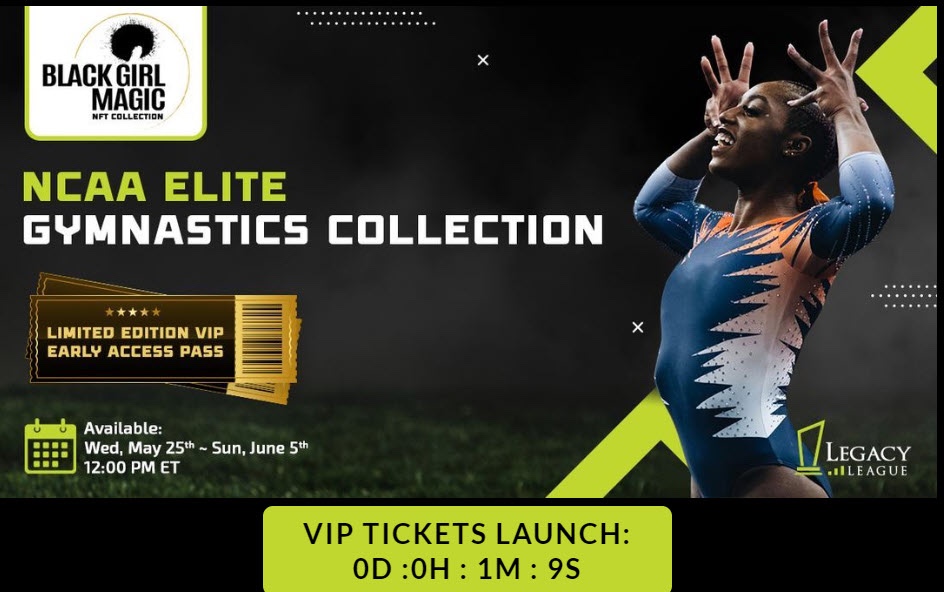 In honor of the 50th anniversary of Title IX and the launch of its new marketplace, Legacy League announces the launch of its first NFT collection designed with black gymnasts, titled “Black Girl Magic”. The collection features National Champion Derrian Gobourne, as well as several other title winning female gymnasts from the NCAA Division I conference. The pre-launch period of the collection will be available from March 25th to June 5th, with a limited number of VIP passes available for purchase. VIP passes will provide access to BGM NFTs as well as exclusive perks such as How-To training videos, FaceTime with the athletes, and several unique collectibles for each athlete.

Each year, NIL (name, image, and likeness) Awards are presented to student-athletes, brands, and institutions for their exceptional achievements over the past year.The Inaugural NIL Summit has already nominated Derrian Gobourne for two awards: Innovator of the Year and Crypto Award.

“At a time when female student athletes lag behind their male counterparts in the NIL ecosystem, we are excited to partner with these seven elite athletes,” said Legacy League President and co-founder Kurt Hallead. “Our mission is to enable every college athlete an easy and effortless way to maximize their income and leverage their brand with NFTs.”

Legacy League has created collections for athletes representing over 60 different NCAA Division I schools, 16 sports, 29 conferences, with over 35% of those athletes being female.

Legacy League is the premier NFT development platform and marketplace for college athletes, legends, and universities to develop and market their products. With its proprietary creation and valuation technology, the digital NIL landscape is fundamentally changed for athletes and universities alike. By providing equal opportunities for athletes to monetize their brand, Legacy League is supported by a team of college sports enthusiasts, digital artists, and blockchain technology experts.