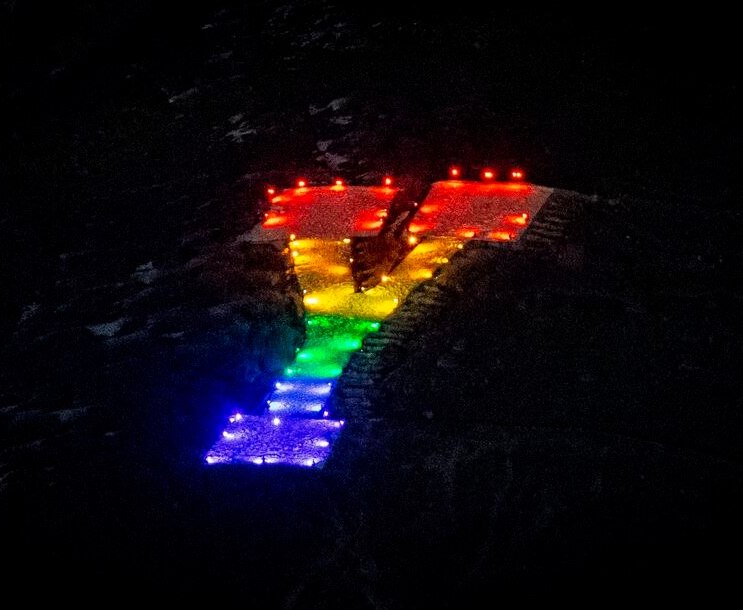 The Y on Y Mountain east of Provo is lit in rainbow-flag colors to show support for the LGBTQ+ community on Thursday, March 4, 2021

Now before Congress, the Equality Act would add sexual orientation and gender identity to existing civil rights laws. At the same time, the Fairness for All Act, introduced by Utah Rep. Chris Stewart, is also in the spotlight.

The Y on Y Mountain east of Provo is lit in rainbow-flag colors to show support for the LGBTQ+ community on Thursday, March 4, 2021

The event marks the anniversary of when the university clarified that same-sex romantic behavior is “not compatible” with its rules.

Brigham Young University experienced bright bursts of rainbow colors Thursday night on the dark mountain that stands over Provo. An orange one would shine for a second and then extinguish. Another in purple would strike up a few feet away before flickering out.

In rows of rainbow colors, they took a distinct shape: The lights illuminated the letter “Y” on the mountain above Brigham Young University.

The powerful display was planned by a group of LGBTQ students at the private religious school. And while Bradley Talbot, a gay student who organized the event, said it wasn’t a protest, he acknowledged that it was meant to send a message of love. “We’re here,” he said. “And we’re part of this institution. We should have a place at the Y.” Talbot noted, too: “It’s a
display. We’re not vandalizing anything. We’re not breaking the law.”

About 40 students and allies took part in lighting the “Y.” The group spent days mapping out the 380-foot tall letter and determining where they would need to stand along its borders to light it up.

The “Y” has white lights installed on it, which the school traditionally lights for Homecoming or a win for its football team. Some said this was a “win” for the LGBTQ Community and allies. A few said BYU is their home. One saw it, too, as a rainbow pointing the way for BYU. The sign at the top of the trail to the letter even notes, “You made it!”

For myself, being an openly gay convert to the Church of Jesus Christ of Latter-day Saints, this marks a message of inclusion that I have felt from all members who have welcomed me in the fold of their church.

No matter what religion, faith background, sexual orientation, or race you have or are, I challenge you to choose love! Open your heart and it will clear your mind. Loving and accepting all is a true Christlike attribute. What if you don’t understand someone or something?

If you have a friend who is dealing with depression and you don’t have the comprehension of that experience, have you asked them what it’s like to be depressed? If you don’t understand why someone is gay, lesbian, bisexual, ask that person what it’s like to be that way. By listening, you gain knowledge. Learning leads to understanding, which broadens your empathy and causes you to love more. You develop Christ’s attribute of true charity.

Best-selling author of; Is He Nuts?: Why a Gay Man Would Become a Member of the Church of Jesus Christ

Dennis Schleicher is currently the President of the Connecticut Authors and Publishers Association. Schliecher is the best-selling author of "Is He Nuts?: Why a Gay Man Would Become a Member of the Church of Jesus Christ." As an in-demand public speaker, specializing in devotionals and social media marketing with the LDS church, Dennis’s relationship with many acquisition editors gives him a unique edge. Dennis is very active on Instagram and loves to interact with his audience there! Follow Dennis on Instagram @DenSchleicher