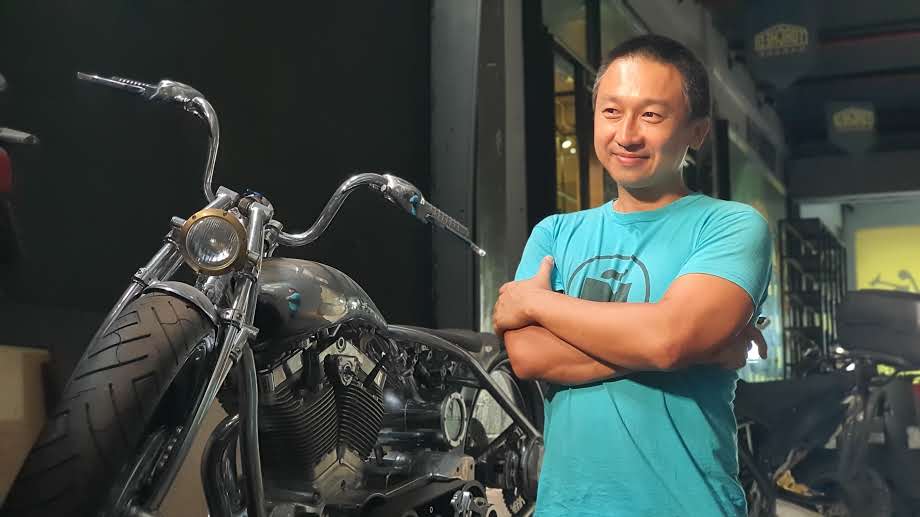 Meeting Iwan, an Entrepreneur, and Inventor from the Bali of Island might change the way people and goods are transported in South East Asia forever.

From a simple idea solving real local challenges to the creation of a German Government Funded Deep Tech Developing Cluster. Now he is pitching to the largest Corporate Venture Capital Funds in the Automobile Industry.

It gets hot at midday in the major cities in South East Asia. Manila, Bangkok, Jakarta, the traffic, the noise, and air pollution drives you mad and at least in my case sick to m stomach. For years in the Laboratory, we have been detecting microparticles in the exhaust system from power systems. Here I don’t need sensitive equipment.

I can smell, see, and taste the air pollution coming form millions of scooter exhaust pipes all around me. Not much has changed in the way people and goods have been transported in the last 50 years. The last major disruption was donkey and horse to the motorcycle.

Polution Problemes are Even in Bali

Living in Bali, people often assume that it is a quiet place. The noise alone from scooters and motorcycles makes sitting outside a test of patience and endurance than anything else. Then there are the safety issues. We all have friends who have had terrible accidents. The emergency rooms are full of people cracking their heads open or at least end up with terrible scars. After we had our baby on the Island of Bali, where transportation by car needs a level of patience that is beyond my emotional capabilities, we drive a scooter with a baby. Wearing a little pink helmet. That will not help much in case of a serious accident.

How to Disrupt an Industry where customer funds are limited?

Iwan first approached me after I gave a keynote speech for Nexus New Energy in Bali. This is an organization run by Danny Kennedy that is fostering Entrepreneurship in Clean Technology. The main focus is on  Developing countries like Indonesia. Iwan brought something to the table I liked, conviction, openness to learn, and a likable personality. Truly someone you feel good to support. He did what every good entrepreneur should do. He did not let me go home until I saw his scooter prototype. Since it was on my way home I agreed. Slowly grasping the concept as I went into a custom motorbike shop where an enthusiastic team was welding together the Komodo Concept Vehicle out of plates of steel. Very unusual for an electric vehicle where weight is everything.

This concept was simple but solved several issues. We all use ride-sharing services here. This is like using an Uber but instead of being on the back seat, you are rubbing your genitals to the driver in front of you.   am an open-minded European and only feel slightly uncomfortable with this seating arrangement. Easily I can imagine being a young Muslim woman feeling even more uncomfortable. Indonesia has the largest Muslim population in the world.

The new door and Seating Design of the Komodo Scooter

The maneuver scooter offered to comfortable seats instead.  The driver hanging from the top. Also, it does not need a stabilizer since an opening allows the driver to stick out his feet at a stop for example.

Such a simple solution for an otherwise enclosed cabin, which will be equipped with an air conditioner in the future. This man has just solved all major issues with scooter transportation, safety, comfort, noise, and pollution in one affordable package. Now that is pretty awesome.

There were three obstacles left for manouv. First of all building a Team that can turn the vision into a safe industrial product. This is where we found a German Engineer building a deep tech support cluster by the German Government. This brings in all the expertise in a self-funded process that is currently missing.

Second of all, we had to transform our founder Iwan from an Inventor to a founder who communicates the vision of this new company. In this case, a special challenge since English is not Iwan’s native language. We did what I always do, working with a camera, taping interviews, and pitches. This was two months ago, we scripted an elevator pitch, word by word. When he first started repeating it on the camera it was a disaster. Not only was the delivery of the lines awful, but also everything that made Iwan likable as a founder disappeared in the tight script.

Weeks later the time had come to pitch at EX Venture night. He was presenting back to back with Lilium Aviation This is a German Electric Aviation Company that already raised hundreds of Millions. It is one of the most promising tech startups in the world. Thing Flying Tesla! At this point, the level of the event and attendees had reached a point we all could not imagine weeks earlier. Every Major investment Fund and Corporate VC tuning in hosted by Anna Teyssot from the Venture Arm at Renault- Nissan- Mitsubishi. Only my friendship at this point made manouv appear on the company line up.

Practice does make for a perfect pitch!

Then the taping came via zoom. And there was our CEO and Founder- pitching with easy, having fun, and combining a great script, with an approachable, likable persona. Not to say he beat in a public vote all the other 30 companies in the lineup. Iwan became the Winner of the first EX Venture Night. Now the time has come to disrupt the transportation industry in South East Asia. A founder willing to focus their story, practice to pitch and present, who is authentic and solves real problems, becomes unstoppable.

Is the world ready to go fully electric? Link

Related Topics:entrepreneurshipventure capital
Up Next

Meet Jen and Elke Clarke, Two e-Commerce Entrepreneurs Who Have Sold 15 million Dollars-worth of Products Without Ads or Physical Inventory