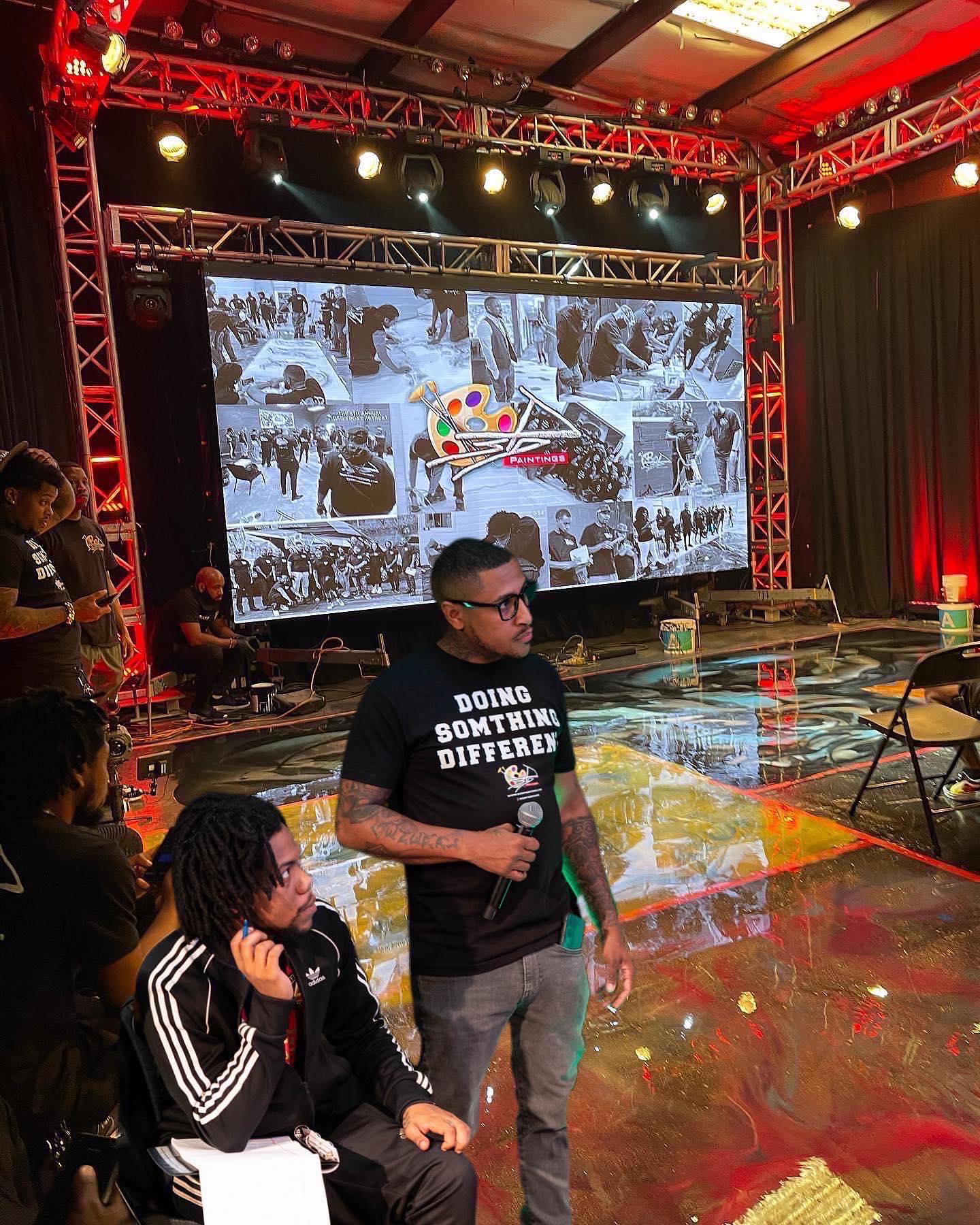 Derwin Scott grew up in Baltimore, MD, Derwin’s journey to creating art began in 2016. Derwin is the Founder, CEO, and Artist of DSD Paintings, where he makes custom-made artworks, flooring, counters, etc., for high profiled individuals. His journey into art is one of those stories reserved for the history books and nothing short of impressive.

It all began in 2016 when he moved into a new house and decided to create artwork to compliment the furniture he had since he couldn’t find something he liked from his local stores. While creating something different for himself, he discovered his potential and decided to work hard to achieve a bigger vision he had behind his art. Derwin has always been creative as he comes from a musical background and has been a musician for years. After moving from music to painting, he began using his art as a mode of expression. Derwin is a driven guy who is interested in impacting the lives of others around him positively by sharing his knowledge and holding classes all over the world, teaching young people how to make art. He has made art for some of the biggest names in Hollywood, such as Taraji P. Henson, Matt Forte, Micheal B. Jordan, T.I, Bootsie, and more.

Separate Yourself From The Rest

Derwin found his artistic prowess by seeking something different. He wanted artwork that would compliment his furniture, but all he could find in stores were ordinary. This is what prompted him to create something fresh and different. The DSD brand was born out of Derwin Scott’s decision to be original and to create something different from what others are doing because he knew that doing what everyone else was doing was not going to set him apart; instead, it would make him blend in. “In order to stand out, you have to do something different.” Being authentic and original takes a lot of courage, and every good businessman has to find the courage from down deep to do something that would separate him from the rest. Every entrepreneur should pick up this important lesson, says Derwin.

Get Inspiration From Your Surroundings

There’s beauty everywhere in the world, and creatives should be able to draw inspiration from the people and the cultures around them. Derwin believes his art is inspired by his life as a black American. His artwork and flooring are inclusive of all ethnicities and cultures, yet they are an embodiment of his ethnicity. He believes his bold maximalist designs are a direct reflection of the black people and their love for details, gold, and boujee designs.

Teaching is more than imparting knowledge; it is inspiring change. Learning is more than absorbing facts; it is acquiring understanding. Derwin Scott understands how important the role of a teacher can be for students, and that’s why he set out to teach people all over the world about his craft.

When asked when he knew it was the right time to start teaching, he said: “I felt like it was my time to start teaching. It was a big impact when I came into the industry and I was always a firm believer, man, you know? Put your heart out there, and when God blesses you with a good opportunity for you to learn a skill, share that shit! You know what I mean? You can’t keep all the money to yourself, you can’t do every fucking job. The most beautiful thing about it is after I started to share my knowledge, I grew big, You get what I’m saying? I started to get more love, more blessings came, and more doors started to open the moment I started to share. Granted, I did TI’s house but had I not been a teacher, I wouldn’t even have a relationship to bring him to a space to give my students motivation… so it’s just like it’s more fulfilling at the end of the day. Make some money. You do some floors that’s dope, got some celebrity clients what next? Change in life. You get what I am saying? You changed yours, change your team’s, change other people and see if you can help guide them as well, man, and that was pretty much it. It just was more fulfilling. It feels good to see people screaming like, oh my god, you changed my life from the information you gave me.”

Derwin Scott doesn’t teach his student how to be a contractor, and he teaches them how to be an artist, how to run a business and always offers guidance in any way he can. He has students all over the world in countries such as Jamaica, Amsterdam, Canada, Africa, and all over the US.