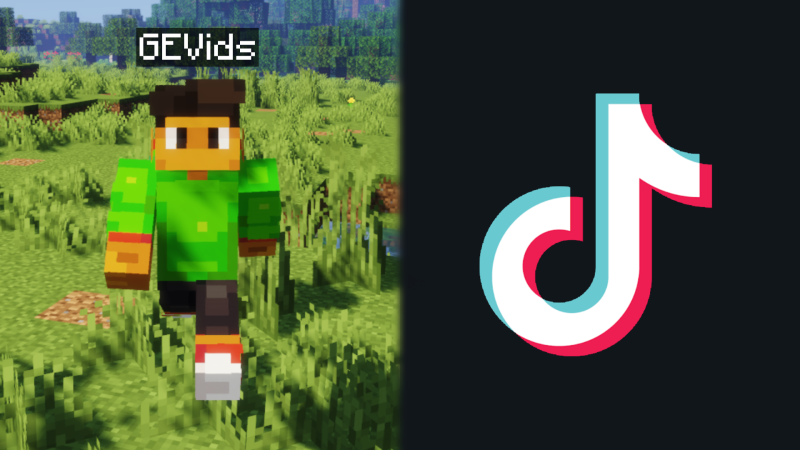 Today, GEVids is a massive TikTok page focused on showcasing the immensely popular game Minecraft. The page boasts an eye-popping 2.8 million followers, and is quickly growing towards reaching 3 million. Perhaps even more interesting is that the person behind this TikTok page is just 14 years old.

That is an impressive level of growth for someone so young. So, how did they reach nearly 3 million followers within just six months? It all started with a dream.

This 14-year-old had dreamed of creating engaging and entertaining content for years. He previously embarked on a mission to do just that. First, he tried gaining traction on YouTube, Instagram, Twitch, and Twitter. While mildly successful, none of those produced the sort of results he was hoping for. It turned out that TikTok, the rising star of the social media world, was the perfect fit for what he wants to do. Once he got on that increasingly popular platform, his popularity went to the moon.

Within just half a year, he had millions of followers. What makes GEVids so appealing is that his videos are silly and feature plenty of funny characters. However, there is more to it than those new to GEVids will realize. “I’ve made a list of characters that people will immediately recognize,” he says. “When a viewer scrolls on one of my videos, they know it’s mine.”

Creating a unique way to show off gameplay in Minecraft has become a niche that he has fit perfectly into, and enjoyed the success that comes with it. When it comes to the type of gameplay he showcases to his audience, it is usually a Minecraft Challenge, such as Minecraft Manhunt. However, he also delves into mini-games like BedWars, SkyWars, and other challenges.

Minecraft’s player base is largely teens, but within this demographic, it enjoys exceptional popularity. If you take a look at any of GEVids’ TikToks, you will see the game features graphics that look outdated and block-like. So, why is this game this popular? Wouldn’t gamers want the latest and best graphics in their games? It turns out that there are more important features than cutting-edge graphics alone.

The reason why the game, and a social media page like GEVids, is so popular is that it is frequently updated and allows for virtually limitless creativity. Every week, there is a new “snapshot” that is released that hints at a big update. This billion-dollar game continues to enjoy the height of popularity even though it was first released back in 2011.

GEVids’ love of Minecraft has led to him creating thoroughly enjoyable content for fans of the game. Given how passionate he is about it, and how creative and entertaining he gets with his videos, it is very likely that we will continue to see his TikTok fanbase grow to 3 million and beyond.

You can check out the GEVids TikTok page @gevids. You can also follow his GEVids YouTube channel.