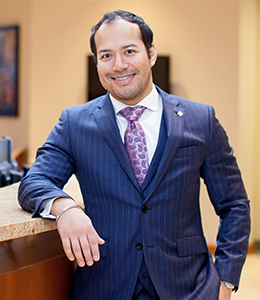 Investors that have lived through the last 20 years have seen markets defined by the power to create and destroy fortunes. We have seen the dot-com boom and bust, financial collapse fueled by subprime mortgages, and the recent pandemic-era crash combined with massive stimulus driving many markets to their highest levels in history. Those perilous cycles have caused most investors to question what the months ahead will look like for their money. Some believe that this is just the beginning of the golden age of investing, but the frequent boom and bust nature of assets like cryptocurrency are giving others a reason to be more cautious. Those dynamics combined with rising inflation and a housing shortage are creating a high degree of uncertainty. Wealth manager Tony Sablan believes that his unique background has provided the tools and experience to navigate the high stakes markets we are experiencing today.

The typical pathway to becoming a financial advisor starts with a four-year degree from a prestigious business school. That pursuit usually includes an internship, often with one of the big Wall Street brokers, an MBA, and then years of building experience to hopefully make meaningful returns. Tony Sablan’s journey to success followed a much different path that started with a defining moment when he lost his father at an early age. The financial hardship that ensued became a catalyst for his passion to learn about building wealth.

Tony worked diligently as a teenager, graduating from college by the age of eighteen. He was already becoming passionate about finance and making his own investments as a young adult. Tony was quickly living the good life, traveling the world, and enjoying financial freedom in his late twenties. That was when the unthinkable happened. The financial crash hit, and like most investors, Tony was stunned when he lost over 40 percent of his wealth in what seemed like a matter of days. Determined to never let that happen again, he realized that a different strategy would be the key to insulating himself from the fluctuations in markets.

Tony made another big decision when he turned eighteen. As a teenager he had seen a professional mixed martial arts (MMA) battle on television for the first time. The sport was starting to gain mainstream notoriety and he was amazed by the 170-pound fighter Royce Gracie. The ju-jitsu master would take on massive fighters and still dominate them because of his skill and toughness. Tony realized that Royce was a giant on the inside and that same type of determination would define his as well.

When Tony graduated from college, he enjoyed having the time and resources to pursue his curiosity with MMA. Living in Seattle provided a major opportunity because there were UFC champions training nearby in the Bellevue and Kirkland areas. He got a big break and began training at UFC Champion Maurice Smith’s gym before eventually training under legendary coach Matt Hume at AMC. Tony knew early on that he wanted to absorb every amount of technical information about fighting possible. While most of his peers were training to become champions in the ring, Tony was more focused on personal mastery of the techniques so that he could also support and coach others in their quest for greatness.  That passion to train with the best created a natural pathway for Tony to become a trusted advisor, trainer, and coach for world champion fighters.

Tony continued the dual lifestyles of wealth building and MMA training for eight great years before the tumultuous collapse of financial markets gave him an epiphany. Achieving the peace of mind, he was seeking from investments, was going to require a new approach. He realized that there were some interesting similarities between building defensive strategies for MMA and his own investment habits. That is when he created a new defensive mindset with his investments that took in to account the dynamic nature of markets while also positioning for growth. The consistency gained from this new approach was exactly what Tony had been searching for. That is the moment he decided to combine two lifelong passions to help others enjoy the same feeling that comes from effective planning; now as a wealth advisor.

Although Tony’s path was unique, he also completed an MBA and became a licensed financial advisor to maximize his ability to support clients’ needs. Tony launched Ultimate Wealth Strategies where he now serves with the same determination that fueled his personal journey. Tony believes that effective decision making is one of the foundational building blocks for the strategy development he utilizes for clients. His bestselling book, Money off the Table: Decision Science and the Secret to Smarter Investing, provides investors with science-based strategy lessons he has gained through a lifetime of investing. Although his career in finance is the top priority, Tony still moonlights as a trainer as part of a world class MMA team with championship fighters, and it is not unusual for clients to see him in their corner during broadcasts.

Tony Sablan believes the biggest similarity between the worlds of MMA and finance is that they are both dynamic. Strategies in the ring change based on the opponent and their fighting style. Likewise, strategies for building and preserving wealth should be dynamic based on the client’s objectives. When fighters become one dimensional, they are vulnerable to defeat.  Tony believes that markets can be extremely punishing in the same way. Having a dynamic approach ensures that investors are managing risk while positioning themselves for returns that match their objectives.

Back From The Edge Of Addiction: The Medical Network Helping Patients Make The Full Journey To Recovery