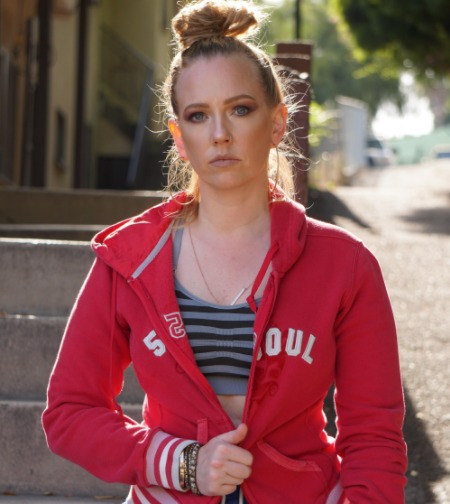 “Heaven’s Views” is Mollie Jay’s tribute song to the late Nipsey Hussle. Produced by DJ Khalil and Mike&Keys (and originally seen on Nipsey’s “Ocean Views”), and shot/directed/edited by Avery Carlton, the song visually and sonically evokes the west coast culture Mollie has grown into since moving from Maryland in -. The video features scenes from Venice Beach of people playing basketball and exercising, visually exemplifying Nipsey’s mixtape and famous mantra – “The Marathon Continues.”

At the onset of the song, Mollie calls to our attention how so many continue to wrestle with accepting the loss of Nipsey’s physical presence in the LA community, and the entire world, which he so strongly impacted . Focusing on the marathon, Mollie’s tribute song “Heavens Views” tells us she is not just about the music but the impact we can have on the world if we continue working. Despite our physical limits on this earth, as Mollie puts it, “energy doesn’t die, it’s transferred.” Nipsey’s work still continues to this day through programs such as the nonprofit Neighborhood “Nip” Foundation for aspiring music professionals and the Marathon Book Club, a group of fans who gather to discuss literature that influenced Nipsey.

The closing of the song pays homage to Nipsey’s triumphant return to the streets after building and growing during his time in jail. It’s an uplifting message about how everyone has something to contribute regardless of their experience; through Nipsey’s example, we can move on from the past and have a positive impact. The song gives us a glimpse into Mollie’s character – she isn’t here for fake clout, she’s here to spread love.