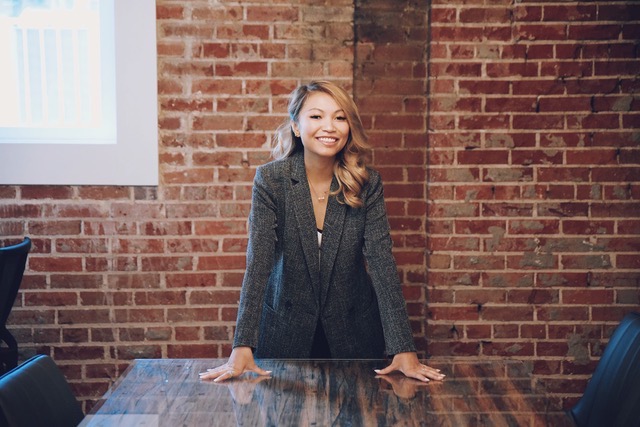 Monique Sar is a second generation Asian-American and the president of BNC Speakers- a boutique speaking bureau that helps connect organizations and companies to a powerful roster of high level speakers. With a lineup of gold medalists, professional athletes, and industry leaders, BNC Speakers is on a mission to provide its clients with the best keynote speakers in the world.

When Monique Sar started her professional career, she had no idea that she would end up being the president of one of the most influential speaking businesses in the world. In fact, she is a self-proclaimed introvert and at the time had a passion for finance. However, after several years working as a top performing financial advisor, she realized it was time for a career change. “We were celebrating a colleague’s anniversary and it hit me, I didn’t want to do this forever.” She referred to her job as having “golden handcuffs” because although she was one of the company’s top performing advisors, she had been in the same line of work since graduating university and knew there was something else for her. So after some thought, she quit her job to build a start up in the CBD industry.

Her first step into the world of entrepreneurship was a success – just not financially. After eighteen months trying to build the systems and find consistent revenue for her CBD venture, she and her business partner had to call it quits. “I personally lost six figures on the project. It didn’t take off and I knew it was time for something else.” Although her startup failed, she credits that time as a crucial period in her journey to success. “When I failed, I looked to learn lessons. What worked, what didn’t work. I took that and applied it to my life.” Fresh out of the school of hard knocks, she launched a new career as a business consultant. After two years of successfully coaching and consulting people’s businesses to six and seven figures, she ran into her next opportunity – BNC Speakers.

Ben Newman is a high level performance coach and has a client list of Fortune 500 companies and high level programs like Microsoft and Alabama Football. He launched his company BNC Speakers because he wanted to reach more people with inspirational and impactful speakers. and as a consultant Sar had first met Newman when she was working in the financial industry. However, their second meeting would be life-changing. “I had a short Yahoo! Finance article that was celebrating my work on Clubhouse. He saw that article and reached out to me.” After catching up a bit, Newman cut straight to the chase. “He wanted me to run his speakers division.” She said yes.

As part of their plan for success, Sar and BNC are dedicated to providing continuing value for their clients. Beyond partnering with speakers that are top performers, energetic and able to capture a crowd, they look to pass value even after the speech is over. “Whether a monthly zoom call, access to an online program, or one-on-one coaching, we make sure to offer more than just a speech.” This commitment to continued value has helped BNC to become a premier player in the speaking industry and Sar sees no reason to stop that success. After just over a year as serving as the president of BNC Speakers, Sar has eyes on taking the company to the next level. ”Currently, we are predominantly focused on the US and Canada market, but I would like to make an impact in other countries around the world.”

Sar is dedicated to the success of BNC. She believes this is the place she was meant to be. “Even when I was running my own business, I was always looking for something more. I don’t want to be the frontwoman, in the spotlight. I want to help integrate and inspire from behind the scenes.” As part of her inspiration, she hopes to use her role to empower and inspire other women and people of color to find their voice and build the life of their dreams.

Monique Sar is the president of BNC Speakers. After nearly a decade in finance and about three years as a startup entrepreneur, she has found her passion. “Helping to inspire others from behind the scenes.” Although her job keeps her busy, she loves reading and building cars in her free time. Her first car build was a Honda Civic and now she is working on a BMW e92. You can follow her on Instagram. You can also see more about her work at BNC Speakers.

Anja Ellam Reveals All On Writing For The Gen Z Demographic