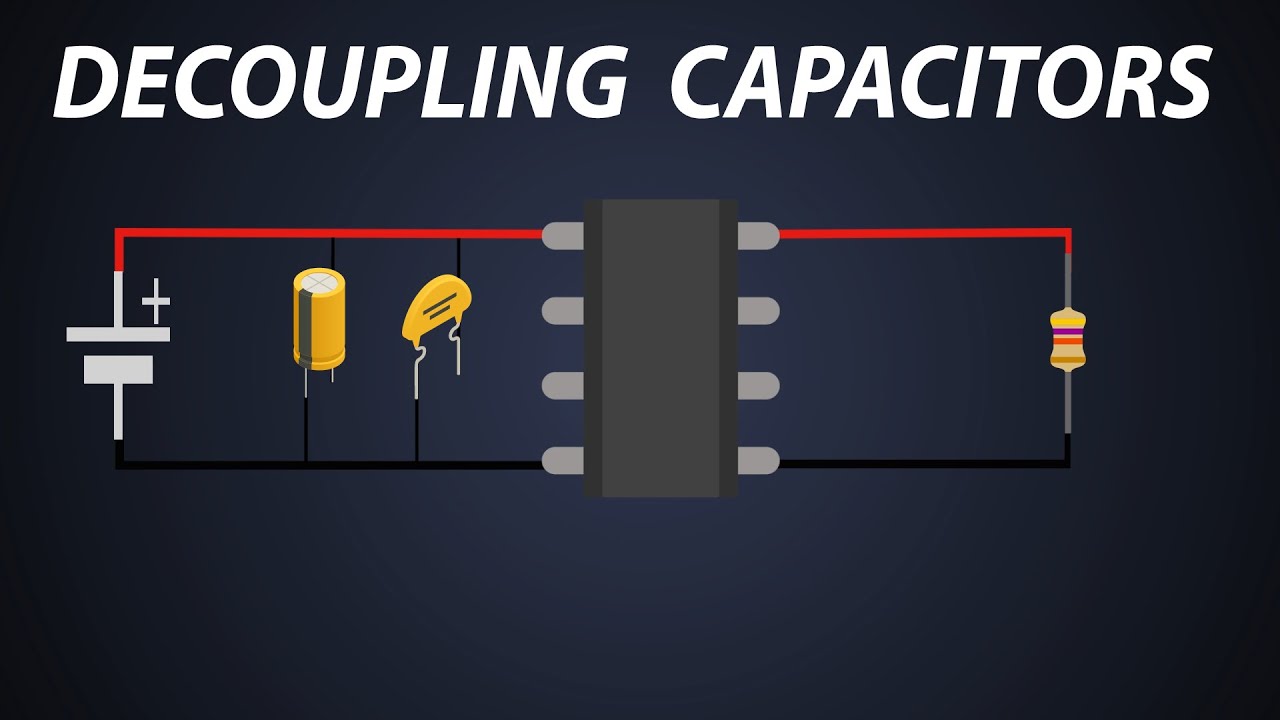 From the name, decoupling is the effect of removing coupling. So what is coupling, and why does coupling occur?

The coupling here refers to the coupling between the output of the previous stage and the input of the subsequent stage. The so-called coupling refers to “in a digital circuit, when the circuit is converted from one state to another state, a large peak current will be generated on the power line, forming a transient noise voltage, which will affect the normal operation of the front stage. This is the coupling.” In this understanding, it is very close to the second cause of power supply voltage fluctuations mentioned earlier, which is caused by the increase in the current drawn by the subsequent stage device, affecting other devices.

The role of the decoupling capacitor to solve this problem is to act as an energy storage battery to meet the current change of the drive circuit, thereby avoiding mutual coupling interference.

In summary, decoupling capacitors have two roles. The first is a function similar to the bypass capacitor, which bypasses the high-frequency noise output by the device; the second is to act as a storage capacitor to provide power when the current required by the load suddenly increases to meet the current change of the drive circuit. This is very similar to the function of the bulk capacitor, and the difference between the two will be discussed later.

An important electrical characteristic of a capacitor is “passing AC, blocking DC”, and the formula for calculating its reactance is as follows:

Z=1/2ΠfC, where f is the signal frequency

The function of the bypass capacitor is to bypass the high-frequency noise in the system to GND. Generally, some capacitors with small capacitance (typical value 0.1uF) are connected in parallel between the power supply pin and GND, as shown in the figure below, to short-circuit high-frequency noise to GND, so as to prevent noise from entering the power supply pin of the device.

The purpose for bulk capacitors is quite clear. bulk capacitor is obvious, that is it is when the load that is powering it requires a significant current immediately it will supply enough flow to the circuit in order to ensure that the voltage is stable. voltage that powers the supply which is the same as that of the reservoir for energy. Thus, the bulk capacitor usually selects the polar electrolytic capacitor which has greater capacitance. It is typically arranged parallel to the output pins in the controller.

How to Choose the Right Decoupling Capacitor?

In the following part, Easybom will elaborate on decoupling capacitor selection.

Decoupling capacitor placement will be discussed below.

What happens if you skip decoupling capacitors in your design?

Without decoupling capacitors, the onboard microcontroller will not function properly because voltage fluctuations send it into the power-down mode, which resets it. Any attempt to get reliable ADC conversions is futile, as the analog voltage source is barely stable. If you were to send a PCB to the field without the decoupling capacitors installed, you would run into a lot of weird issues due to the greater electrical noise.

So, would put a few decoupling capacitors at random on the PCB do the trick?

What should the decoupling capacitors be placed in the right place?

The most effective way to comprehend how the distance of the decoupling will affect you is to examine the phase relationship between sources of noise and capacitive compensation. If the demand for current on the chip fluctuates the voltage disturbance is created in a specific area within the power plane. In order to compensate for this change in voltage (or voltage) it is necessary for the capacitor to initially detect this voltage disturbance. There is a time limit for signals to travel through the medium. Therefore, there is a gap between the occurrence of an isolated electrical disturbance as well as the capacitor’s sense of disturbance. In the same way, a delay needed to allow the compensation current of that capacitor to travel to the affected area. This is why the inconsistency between the source of noise and capacitive compensatory current has to be the result of.

A specific capacitor is the best in absorbing noise that is at exactly the same that is the frequency that we are able to determine this phase relationship. If the frequency of self-resonance is F and the wavelength be l. The compensation current equation can be expressed as:

Of these A is the current’s amplitude and R is the distance between the area that is to be compensated by the capacitor while C represents the speed of signal propagation.

If the distance between the area of disturbance to the capacitor exceeds 4 and the timing of the current compensation will be p which is precisely 180 degrees from that of the source of noise, which is, totally out of the phase. When this happens the compensation current does not work as the decoupling function is ineffective which means that the compensation energy can’t be transferred in a timely manner. To effectively transfer the energy of compensation there should be a phase gap between source of noise as well as the current used to compensate must be as minimal as is possible as possible, and should be within exactly the same direction. The further away the distance and the lower the difference in phase and the greater compensated energy will be transferred. When the distance falls to zero 100 percent of the compensated energy goes to the area of disturbance. This means that the source of noise to have the closest distance is possible in proximity to the capacitor and much smaller than l/4. In real-world applications the best distance to be managed between l/40 and l/50. This is an empirical measurement.

For instance, 0.001uF ceramic capacitor, If the total parasitic capacitance after it is installed onto the board 1.6nH The frequency of resonant after installation is 125.8MHz and the resonant frequency is 7.95ps. If the signal travels at 166ps/inch over the board the length of the signal of the signal is 47.9 inches. Its capacitive radius of decoupling is 47.9/50=0.958 inches that is roughly equivalent the length of 2.4 cm.

To summarize in determining an appropriate decoupling capacitor, elements to be considered are factors like the capacity of the capacitor, its ESR, ESL value, and the resonant frequency. While layout, you must determine the amount of decoupling capacitors depending on the amount of IC power pins as well as the space around the layout. A coupling radius is determined by which layout location.

How to Find the Right Medical Equipment Vendor

Micro SaaS: My Ticket Out Of The Rat Race, A Founder’s Story with Rick Blyth