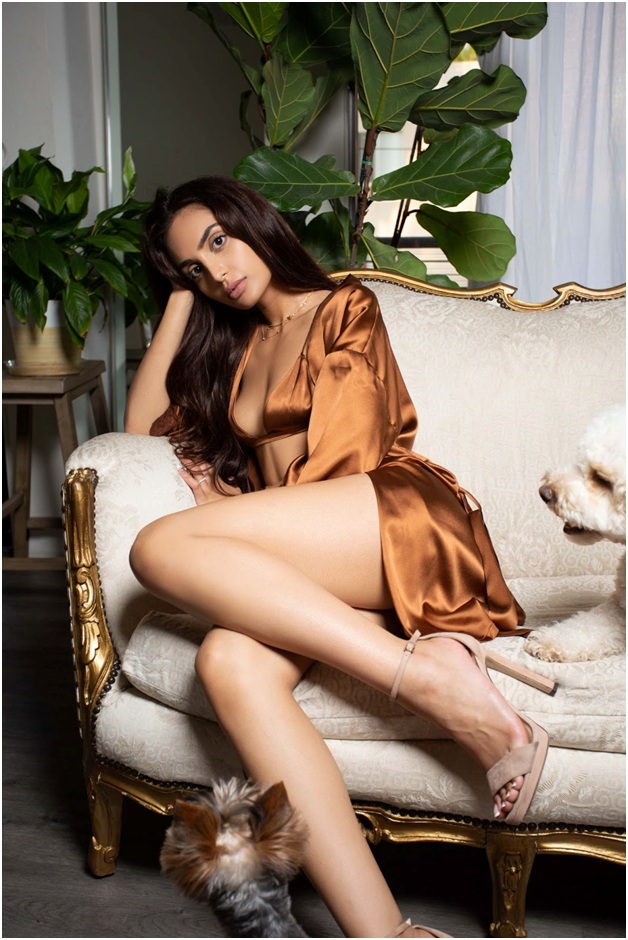 High-Profile Model Brings the Runway to the Rack

Naked Lynx Loungewear was founded in 2020 by Priya Jain at the height of the pandemic, one year after she moved to New York City. Priya wanted to create a fashion brand that would empower women by helping them to project success through magnifying their personal appeal and by contributing to their overall sense of self-worth.

Prior to launching Naked Lynx Loungewear, Priya was well-acquainted with the world of fashion through her countless photo shoots and projects as a leading model. Her modeling resume would be nearly impossible to cover exhaustively, although her prominence in the industry is attested to by her innumerable collaborations with the world-class photographer Ash Gupta (mainly for 838 Media Group in Los Angeles as well as in Gupta’s own galleries).

Other high-profile photographers that Priya has worked with include Kesler Tran, Yves Huy Truong, Max Thompson, Jen Senn and Sam Demshek. Priya has walked for Veronica Paegen in the Miami Swim Week and in California for Nordstrom’s Trunk Club Business Wear, and she has modeled for such illustrious brands as Brilliant Carbon Jewelry, Gooseberry Swim, Wolford, Fae Swim, Veronica Peagen Swim, Raju Clothing, Blu Dream Swim, and 138 Water. Priya’s image became so in-demand both inside and outside of the modeling industry that she featured in music videos for Snoop Dog and Monday Justice.

Priya’s prolific modeling career has given her two unique vantage points from which to approach women’s fashion:

By working with highly talented photographers as well as the personnel of top luxury brands, Priya developed an intimate understanding of exactly what communicates success, beauty and personal magnetism.

Furthermore, as an in-demand model who has posed in countless photo shoots for the crème de la crème of luxury fashion, Priya developed an uncommonly intimate understanding of what exactly makes a woman feel successful, beautiful and magnetic.

Priya incorporates her unique insights into her own company’s approach to fashion, rolling out products that will better enable women to not only be their best selves, but to feel like their best selves, too. Since these products are largely informed by Priya’s modeling career, which has had a particular emphasis on luxury resort wear, the brand’s catalog offers silk and satin robes, swimsuit tops and bottoms, and high-end sweats.

Priya is a committed cosmopolitan, running her company from both New York City and Los Angeles. Priya also makes frequent trips to the fashion capitals of Europe where she always gathers fresh inspiration. Her influence is not limited to the European and American continents, however. A self-described ‘travel junkie,’ Priya has also visited India, Japan, Bora Bora, Cancun and Anguilla. Priya finds inspiration not only from the fashion designers in these areas around the world, but in the regional aesthetics and flavors of these places.

Priya is equally influenced by the simple pleasures of slowing down and soaking in a particular place. The feeling of laying in the sun on a picturesque beach is imbued into every one of Naked Lynx Loungewear’s products. As the company succinctly puts it, their products are “for the babe that likes to be seaside in Malibu or poolside in the Hamptons.”

The Values of Naked Lynx Loungewear

Priya is a vegan of eight years and has an indefatigable passion for animals. For this reason, the company does not make any use of animal products in their catalog. With the proceeds from Naked Lynx Loungewear, Priya hopes to start an animal rescue sometime within the next ten years. The company also takes great care to source all of their products locally between New York City and Los Angeles, to reduce their overall carbon footprint.

With their catalog, Naked Lynx Loungewear aims to facilitate greater happiness and self-assurance in women around the world.