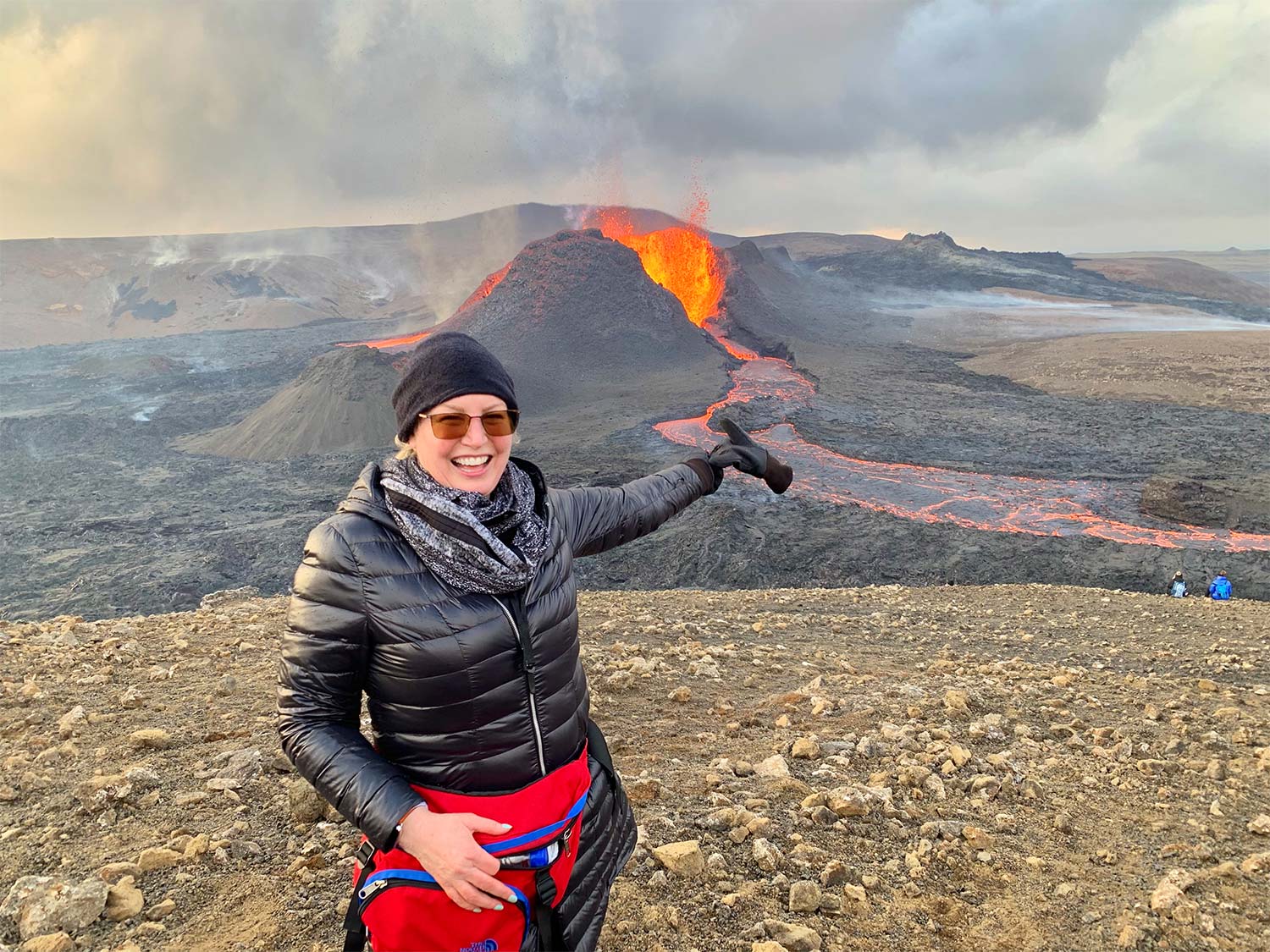 Iceland is home to roughly 30 volcanic systems, but Fagradalsfjall Volcano is one of its best-known and a popular tourist attraction. An active volcano, Fagradalsfjall has been erupting with effusive lava flows as recently as this summer (continuing to erupt as of August 2021). Fagradalsfjall is a tuya volcano, a rare flat-topped volcano that only forms when lava erupts through a thick panel of ice or a glacier. With their flat tops and steep sides, tuya volcanoes are reminiscent of tables. Fagradalsfjall is located close enough to the Icelandic capital of Reykjavik that its lava plumes have been easily visible from the city.

If you are planning to visit Iceland, it’s an amazing time to witness this active volcano. Private and group tours are available with 2Go Iceland and promise to delight you with an adventuresome but safe scenic experience.

Although it seems like a daily experience as of late, Fagradalsfjall eruptions are actually quite rare. Prior to its eruption in March of 2021, the volcano hadn’t erupted for roughly 800 years. Seismic activity in the area triggered that most recent series of eruptions, which no one knows how long will continue. According to scientists, this eruption is only one of about 10 to occur here in the last 8,000 years.

Scientists have reported that the eruptions have actually gained in strength rather than waned as is typical with many eruptions. The more powerful pyrotechnics displays suggest that there is quite a large reservoir of lava beneath Fagradalsfjall that is fueling this spat of volcanic activity.

The volcano’s fissure vent first opened on March 19th and since then has been sending postcard-worthy rockets of lava into the air. The lava then spills down the side of the volcano, creating telltale rivers of molten red lava that are literally transforming the landscape before visitors’ eyes. The volcano’s pyrotechnics are majestic and are attracting many tourists to the location. Few eruption sites are as easily accessible as Fagradalsfjall.

Where Is Fagradalsfjall Volcano Located?

Fagradalsfjall Volcano is located a mere 25 miles from Reykjavik and is under a half hour’s drive from Keflavik International Airport. Its proximity to the capital makes it one of Iceland’s most popular natural attractions. Typically, visitors head from the capital to the coastal fishing town of Grindavik before embarking on hiking tours of Fagradalsfjall. Naturally, as the volcanic activity remains ongoing, visitors must remain a safe distance from the volcano, but guides escort tour groups to the places where the viewing is at its best.

Fagradalsfjall is actually part of the Krysuvik-Trolladyngja Volcanic System, which is located on the Reykjanes Peninsula. It’s situated on a plate boundary of the Mid-Atlantic Ridge, part of the largest mountain ridge on the planet, extending down the Atlantic Ocean from the Mid-Arctic Ridge located near Greenland down to Bouvet Island in the South Atlantic.

The Krysuvik-Trolladyngja Volcanic System does not have a central volcano. Instead, it features what volcanists refer to as a ‘fissure swarm.’ There are numerous volcanoes like Fagradalsfjall as well as fissures and vents. Some scientists now consider Fagradalsfjall Volcano to constitute its own volcanic system, but it’s still most frequently viewed as part of the Krysuvik-Trolladyngja Volcanic System.

Formation of a New Volcano?

Fagradalsfjall massive eruptions have many scientists waiting impatiently to see if a new shield volcano may form. Scientists have not previously had opportunities to see this type of development occur in real time. If Fagradalsfjall’s eruptions continue for a long enough period of time, it’s quite likely that the world will get to see how magmatic systems actually form new volcanos.

Now is possibly the best time to witness Fagradalsfjall Volcano eruptions. Tours with 2Go Iceland begin in Grindavik. Hikers will meet at a specified location in the fishing village and then travel ten minutes to the hiking trail. According to guides, the 6.2-mile hike is suitable for hikers of all ages, including kids, providing participants are in moderate good health.

There are also more difficult treks that hikers may choose; these are longer and feature more difficult terrain. For the more challenging hikes, participants may need to use a pole. The most difficult hike allows for some exploration of the valley; if you’re a geology enthusiast, this hike is a terrific option. However, guides suggest that only people with hiking experience and who are physically fit should attempt this trek.

The basic tour lasts anywhere from four to five hours. The trek to and from the best vantage point takes about 90 minutes each way. Hikers can expect to view fresh lava flows and fields of cooled magma that cover the dark and forbidding landscape. Although Iceland is home to many volcanoes, this active system, which is so easily accessible and visible, is delivering what can only be described as the most dramatic eruption views.

What Should You Bring to Hike at Fagradalsfjall?

Tour guides of Fagradalsfjall Volcano suggest that hikers wear suitable clothing for the area that includes waterproof clothing, a thermal base layer, and a windbreaker. A hat, gloves, and backpack are also recommended. Because the hike may last up to five hours, it’s helpful to bring snacks and water. Many hikers bring their own walking stick and a good camera. Naturally, wear comfortable hiking boots as the terrain can be slippery and difficult.

At 2go Iceland, we provide you of Snacks and water. We also have walking sticks.

You can as well talk about how seriously 2go iceland takes the safety, and thats why we are one of the only companies with the guides equipped with gas meter and also gas mask ready for the customers in case we have over gas pollution.

It’s truly a most spectacular time to visit Fagradalsfjall Volcano with its visually arresting eruptions of lava. Tours of the volcano are available for mornings, afternoons, and even evenings when the bright coloured lava makes for incredible viewing against the dark evening sky.

And also during winter we can experience the northern lights over the volcano, weather dependent.

If you’re looking for a once-in-a-lifetime hiking opportunity, this is definitely one to consider. Contact 2Go Iceland to book your tour.

Need IT Consulting Services? Check Out These 10 Factors

Fashions Blvd Is Re-Inventing the Magic of Fashion

Hi! I'm Andres Castro. I'm the Founder and CEO of Andres SEO Expert LLC. I'm a top SEO expert in Miami and a Columnist at Disrupt Magazine. I help small and medium businesses create succesful digital strategies that take them further up the search engines. I love work as scientists does. I'm passionate about utilizing advanced technology and online marketing tools to improve the SEO results of my clients. I work with techniques and methods, nothing is automated. As a small business owner, your business is your baby. It can be scary putting it into someone else's hands. You might worry that the SEO content won't meet your high standards. Or simply giving someone control of your website could break you out in cold sweats. When it comes to SEO, a lot of small business owners think they can do it alone. All it takes is a few YouTube tutorials, right? The truth is that when you put your SEO in the hands of an SEO expert, you can take advantage of their years of training and experience. Plus, the expensive software they've invested in. I've been working in communications since the year 2000 and in SEO since 2010. That's over 10 years of watching the algorithm change and learning what works and what doesn't work. I've learned all the big lessons, so you don't have to. I'm here to help you grow! If you're ready to start your journey to the first page, I'll be by your side every step of the way.