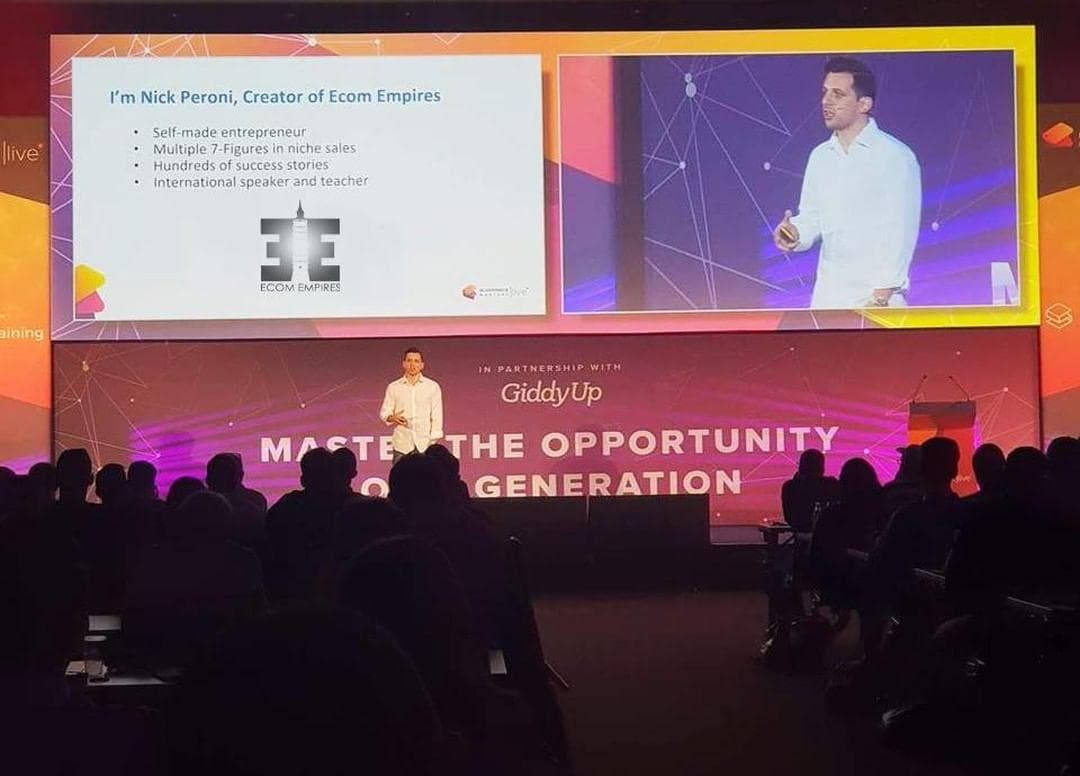 Social media has changed the world. And many people now dream of using social media to build an online business, so they can quit the 9-5 rat race and live a life of freedom.And right in the middle of this dream, we find Nick Peroni. Nick is an online entrepreneur who built a group called Ecom Empires to help people all around the world achieve this dream. He started towards the end of 2016, and now his group has become the largest e-commerce group in the world.

Like many people, Nick’s life as an entrepreneur started at the bottom. He was a college dropout and broke Army Veteran, looking for a way to avoid the dreaded cycle of never-ending jobs he hated. It was when he discovered the book, “The 4 Hour Workweek” that he was introduced to the idea of an online business. That’s when he started down a journey that eventually led him to e-commerce.

It took Nick years of trial and error, thousands of hours and thousands of dollars invested to start gaining success as an online business owner. And in 2016, his biggest breakthrough came when he discovered the business model of dropshipping. His success with dropshipping was scaled quickly, and he wanted to share that with others. So he created Ecom Empires and recorded a series of videos that showed step by step live how to use dropshipping to make your first $10,000 in sales. Then he did something never seen before and gave the course away for completely free to members of his group.

The truly amazing thing was that people started using his course to cash in on major paydays! People were literally using this free information to build 5-Figure, 6-Figure, and even 7-Figure businesses.  As the community grew, Nick focused on building a network of people that would support each other’s dreams of success. And then he started something called the “Worldwide Ecom Tour” where he traveled the world speaking and hosting events to help people learn e-commerce.

True to his vision, he did these event non-profit. During the first year of the Tour, Nick visited over 20 countries and spoke to thousands of people. It’s estimated that between Nick and the people he’s helped, Ecom Empires has impacted into 8-Figures in revenue.

Who Is Nick Peroni

Nick has often said that true leadership is not identified by self-proclaimed results, but by the results, you help other people get. In one post of Nick’s group, a member named Bhupinder Singh described Nick as a real hero. He even said, “In my mind, Nick Peroni get the Nobel Peace Prize for what he has offered.”  In another post, someone said Nick reminded them of the “Tony Robbins of e-commerce.” Nick has been thanked in countless posts for the results he’s helped people achieve, and also for the motivation, he’s provided for people to change their life. From people learning how to make their first sale online to people quitting their jobs, to people making hundreds of thousands of dollars- Nick’s impact has reached far and continues to help people succeed.

Is There More to Come?

Looking to the future, Nick says that his goal is to use Ecom Empires as a platform that can impact thousands more lives all around the world. Nick is currently partnered with some of the top leaders in the e-commerce community, and he’s focused on bringing more education and resources to help people succeed. Coming from humble beginnings to running a worldwide empire, Nick truly believes in the power of following your dreams. He is always reminding his audience that no matter what your situation right now, you can overcome anything to build the life you want. Every day is about learning, growing, and becoming a better person. And building something that can truly have an impact on other’s lives.

Nick is not only building his own e-commerce business, but he’s also involved in building apps for sellers, launching a new P2P network to connect sellers and vendors, as well as investing in businesses, and developing the ecosystem for emerging markets.

Nick has become a great example of chasing the long vision, instead of looking for the next get-rich-quick scheme. The world of online business provides massive opportunities for anyone from anywhere in the world, and Nick believes that if you truly focus on using that opportunity to solve problems and deliver value to others, then the sky’s the limit.

One of his favorite quotes comes from the legendary speaker, Zig Ziglar: “You can have everything in life you want, if you will just help other people get what they want.”

Nick is focused on the future, and trying to remain a positive influence in the world for others to find success. And if you want to join his e-commerce group, you can find it on Facebook at https://facebook.com/groups/ecomempires.