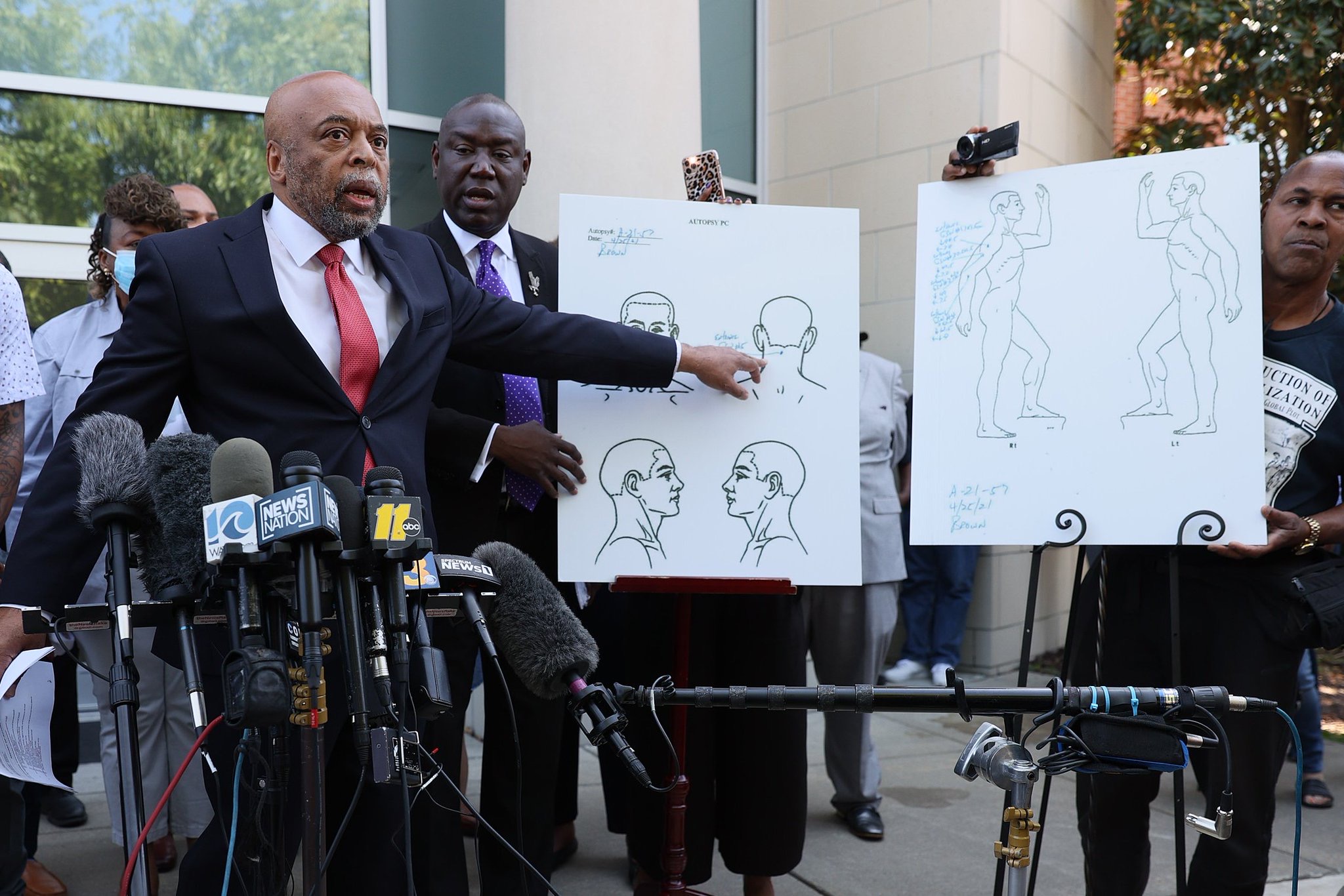 On Wednesday, a North Carolina judge denied a request from a North Carolina county sheriff along with multiple media outlets to immediately release the body camera footage which depicted the sheriff’s deputies fatally shooting Andrew Brown, a 42-year-old Black man.

Pasquotank County Superior Court Judge Jeff Foster issued his ruling after hearing arguments for and against releasing the videos, which included a plea from the local district attorney to deny the request, based on the potential for jeopardizing the North Carolina Bureau of Investigation’s ongoing probe of the deadly April 21 confrontation outside Brown’s home.

On April 21, Brown, 42-years-old, was shot five times in a fatal encounter with Pasquotank County Sheriff’s Office deputies. Mr. Brown was shot four times in the arm while sitting in a car with his hands on the steering wheel and once in the back of the head, as he put the car in reverse, turned it around, and attempted to flee, according to news reports.

A brief video was recording the encounter by a body camera attached to an officer’s uniform.

Following the incident, seven Pasquotank County Sheriff’s deputies who were involved in Brown’s shooting, have been placed on administrative leave. Their names, according to ABC News, have not been released. On Tuesday, the FBI announced that it had opened a civil-rights investigation into Brown’s shooting, serving drug-related search and arrest warrants in North Carolina.

The decision by Judge Foster is extremely troubling, considering the recent ‘victory’ following the Minnesota jury trial of Derek Chauvin for the murder of George Floyd, a 46-year-old Black man, as well as for meeting the requirements of state law.

Because North Carolina Law Says So…

Under North Carolina law, the release of body camera video must be ordered by a judge. But is the Court’s decision an insult to injury and legal jurisprudence itself, given the time we are living in?

The 2016 law set specific guidelines on the means by which body-cam footage can be reviewed. Currently, the law allows private viewing of body-cam footage by family members, in this case, Mr. Brown’s son, and permits law enforcement to blur faces to protect active investigations. For this reason, the law requires a judge to decide whether to publicly release any body camera footage, which gives rise to the many petitions by both Mr. Brown’s attorneys and multiple media outlets.

“In this modern civil rights crisis where we see Black people killed by the police everywhere we look, video evidence is the key to discerning the truth and getting well-deserved justice for victims of senseless murders,” the family’s statement reads. “Just look at the murder of George Floyd — if the world had not seen that clear and disturbing footage, there might not have even been an ounce of accountability for those officers. We refuse to be discouraged and vow to keep the pressure on these agencies until we get to the truth. We will not stop saying his name. Andrew Brown Jr.”

Crump has represented the families of Mr. Floyd and Daunte Wright, who were also killed earlier this month in Minneapolis. Other members of the community have come to show support, including the mother of Eric Garner, who died in 2014 after being put in a police chokehold.

In granting the disclosure of the footage to Brown’s son, Khalil Ferebee, Judge Foster ordered that any identifying information, including faces and badge numbers, be blurred or removed.

Additionally, the Court ordered that the public disclosure be delayed by 30 to 45 days while the State Bureau of Investigation completes its investigation and any potential charging decision is made.

In Judge Foster’s decision, the Court listed seven factors for why publicly releasing the video footage, while “advancing a compelling public interest,” could also “harm the reputations and jeopardize the safety of individuals seen in the footage.”

The videos, according to the Court, “contain confidential information that is exempt from disclosure under state and federal laws and if made public could reveal ‘information regarding a person that is of a highly-sensitive and personal nature.’”

Judge Foster added that the release of the videos would also “…create a serious threat to the fair and impartial, and orderly administration of justice.”

Ironically, the same could be said by the Court’s very decision in not allowing for the release of those videos. Also, could the same not also be said when it came to publicly showing the police body cam footage and other videos as it pertained to MN v. Derek Chauvin?

There seems to be an extreme inconsistency and lack of understanding by the Pasquotank County Superior Court, and not just an insult to the recent verdict for Floyd’s murder case, but a step backwards in terms of what Judge Foster calls a “fair and impartial, and orderly administration of justice.”

The judge said the video should be disclosed to Brown’s family within 30-45 days. The judge ordered deputies to blur or redact any identifying information for deputies in the video.

“You cannot swing a skunk in front of a group of people and ask them not to smell it,” he said.

“We refuse to be discouraged and vow to keep the pressure on these agencies until we get to the truth,” the family and counsel added. “We will not stop saying his name. Andrew Brown Jr.”

Related Topics:Andrew Brownlegalsystemic racism
Up Next

Down to the “A”: U.S. Supreme Court Decision Gives Hope to Hundreds of Thousands of Immigrants Facing Defective Immigration Proceedings

Andrew Rossow is the Legal Editor and Strategy Operations Advisor at Disrupt Magazine, focusing on cannabis, social justice, and technology. He is a practicing attorney and the CEO and President of AR Media Consulting. He serves as a co-founder of The Guardian Project, alongside TV actor, Mark Pellegrino (13 Reasons Why, Supernatural, Lost, Dexter). Rossow has appeared regularly on CHEDDAR TV, ABC, FOX, CBS, and NBC affiliate networks throughout the U.S. He has been recognized by Entrepreneur and Fast Company for his journalistic integrity in helping build out and grow media outlets, formerly Grit Daily News.