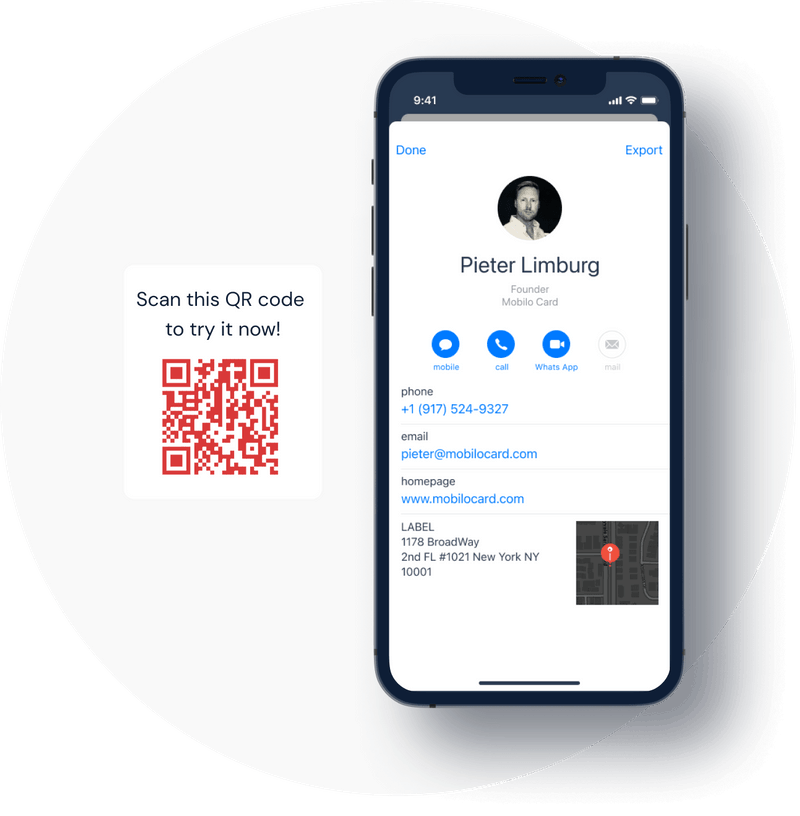 Life as we knew it is finally coming back to life. According to the latest studies, three out of four workers are headed back to a desk in a building somewhere. Millions of Americans have already hit the road. As of last week, airports are (finally) busier than before Covid. The indispensable business tool is no longer a Zoom account but, once again, the humble business card.

The ritual of exchanging cards is a near-universal and centuries-old acknowledgment that first impressions matter. It’s also an archaic and wasteful tradition that’s been long overdue for disruption.

Try to imagine asking a client or customer to print out a document, sign it, scan it, and email you back the scanned image. They’d think you were joking. Why not just use a digital service like DocuSign? Why be purposely inefficient? Why waste a tree?

Yet this byzantine ritual is perfectly common–and accepted!–when it comes to one document: the business card. Now one company has invented a way for businesspeople to make a better impression with one tap or snap and no paper.

Dutch techie Pieter Limburg vividly recalls the morning after he returned from a trade show to face more than 90 scraps of paper, all of which needed to be hand-typed into his CRM app. “Not the best way to start a day!” Limburg says. “That was hours of mindless data entry work sitting in front of me. Yet I was just relieved that I hadn’t lost any of them!” The experience was an aha! moment that inspired a vision: a digital card that would empower better business connections while helping to save the planet.

Limburg’s vision became a reality known as the Mobilo Card–a first-in-class reusable business card that blends NFC, QSR and CRM technologies into a seamless, one-and-done data capture-to-lead generation process. The flourish of presenting one’s card may be the same, but Mobilo holders simply tap a prospect’s NFC-enabled mobile device, or else flip their card to be quickly scanned by a camera phone. Details are captured instantly and permanently. “Even my techie friends never cease to be amazed by how easy it is,” says Limburg, “and how obvious!” Thanks to the QSR code imprinted on the back, the Mobilo card even works in virtual meetings.

Even better, Mobilo integrates into more than 2,000 CRM and automation platforms, meaning that leads can be followed up on automatically while data can be analyzed for insights, in real-time. And because Mobilo’s software knows how many connections have been made, employers are able to evaluate the engagement of individual employees in order to improve the efficiency of their networking efforts.

“In essence,” Limburg observes, “we’ve taken a series of large variable costs–not only printing, but manual data entry and insight analysis–and replaced these with a single, small fixed cost.” The Mobilo app, which Limburg coded himself, has different modes for different networking needs: contact sharing, social profile hub, lead generation tool, and a link to any URL.

Equally important as saving money is saving trees. So in addition to the “classic” Mobilo card, the company offers one made of recycled wood; for every one of these cards sold, the company plants a tree. Mobilo also offers a metal card. Made of steel, it harkens back to the days when calling cards had to make an impression in the top echelons of society. Mobilo’s website describes its metal card as “breathing exclusivity, like a Rolls-Royce.”

A design tool on the Mobilo website allows customers to create their own, bespoke card. For the less nostalgic customer, fobs and smart buttons are also available.

Like business itself, Mobilo is a global phenomenon. Its cards are now active in 183 countries and the Mobilo app has on-boarded more than 5,000 companies so far. Functionality is available on Android, iOS, and even desktop via a web application.

Which leaves one last question: What about etiquette? What are the chances of bewildering a potential business partner–or, even worse, offending them–with a wave or a tap rather than a memento?

Limberg says that for first-time connections, it’s wise to keep paper business cards handy—just in case you’re dealing in a culture that values ceremony as much as the data itself. “For everyone else,” he says, “consider making the upgrade to Mobilo to make better impressions, save money on printing costs, and network more effectively. They’ll remember you.”