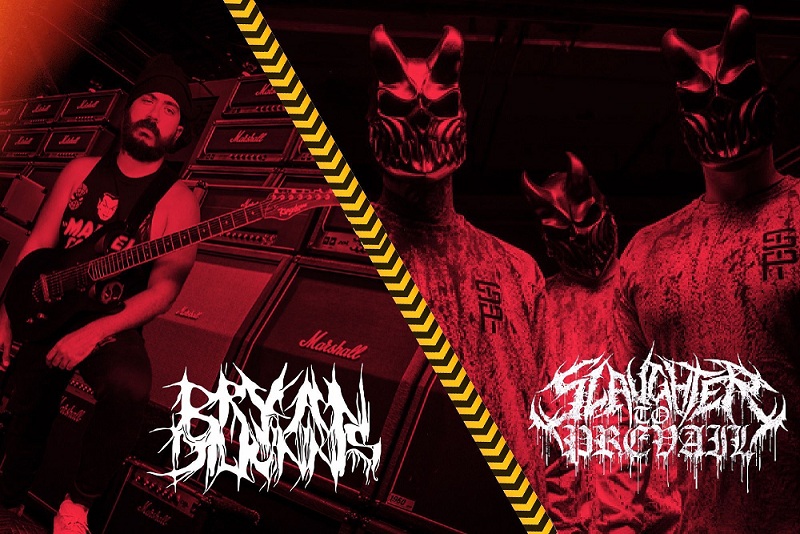 It’s been a little over week since the most anticipated deathcore album of the year dropped, and with that so have the reviews. Slaughter to Prevail’s “Kostolom” quickly turned heads and made it’s way up the charts as fans instantly devoured the album. With today’s access to technology and music at your fingertips, fans quickly noticed a few particular details.

“It sounds too much like Slipknot” was one of the prevailing comments, no pun intended, but as another fan pointed out, the music was pretty different from what they were expecting following their EP “Chapters of Misery” (2016) and first full album “Misery Sermon” (2017).

With the first EP there were challenging guitar solos that even though to me sounded synthetic, in addition to Alex’s powerful vocals, the technical guitar playing was what stood out and made me follow the band. As any fan would, I couldn’t wait to see my newly discovered band live. My first attempt at catching this heavy band on tour was Suicide Silence’s 10 Year Anniversary of “The Cleansing” Tour, where they would’ve joined fellow bands Prison, Winds of Plague, and Upon A Burning Body on the roster.

After that attempt was unsuccessful as the band was not able to make it into the US, my second chance to see them was on their headlining tour across America, “Born To Die” Tour in 2018. I was lucky enough to see them in my home state in New Hampshire at The Bungalows along with my buddy’s band, The Last King, that was opening for STP.

The show was packed, and when they started playing the first thing that popped into my head was “WOW, these guys sound unreal!” Alex’s talent as a vocalist is undeniable, their new drummer was like a well oiled machine, their bass player was engaging, and to my surprise, their new guitarist was the same guy that sold me a t-shirt at the merch table earlier in the night. Not only was he a super down-to-earth dude, he was also an insanely amazing guitar player.

I was expecting the music and the rhythm section to be great, but it wasn’t until I heard live for the first time those same solos that struck me from their first EP being played in front of me flawlessly that I became obsessed. After the show was over, the guitarist was the only one that stuck around talking to fans, and I was able to snatch an autograph. Unfortunately there were a few beers in my system and I couldn’t remember his name from our conversation, and after it was too late, I realized I couldn’t make out what the autograph said.

Months went by trying to find this mystery guitarist, and for the longest time it was a dejavú as it felt eerily similar to what happened with KISS and Mark St. John, as there wasn’t any mention from him even on Wikipedia as a past member. Fast forward to Slaughter’s tour with WhiteChapel and a new face emerged behind the guitar; the band had changed guitarists once again and this time around, to say I was highly disappointed was the understatement of the year.

In my quest to find the mystery guitarist from the New Hampshire show, I went down the rabbit hole of Youtube videos and watched all their past and recent performances. Unfortunately they changed guitarists again, but this time I couldn’t see faces as they were masked up. Even though the guitarist had the band’s signature devil mask on, I could tell it wasn’t the same guy I saw live, not just because their sound was quite deteriorated, but the solos weren’t even being played live, which was another blow to my declining fandom. I know bands use backing tracks live, but if you’re replacing an entire instrument, can you still call it a live show? This is simply not the quality any fan is expecting from an international, label signed band. While the band has quite the following mostly interested in Alex’s vocals, there are many aspiring musicians that follow bands for their real musicianship, and unfortunately it wasn’t being delivered for me.

After so many disappointments, I lost interest in the band and gave up on my quest to find the guitarist I had met on that cold night at The Bungalows.  Like any metalhead searching for new bands, I was playing a Spotify deathcore playlist when I stumbled upon a track called “Acid Reign”. I had the song on repeat for quite a while before actually looking up to see who the artist was. When I clicked on the artist name and I land on the home page, low and behold it was the face I had been searching for all that time ago, and his name was Bryan Dilionnis.

I binged his entire discography in one sitting and not only did it reassure me that he’s an amazing guitarist, but he is also a brilliant composer. I had so many questions that needed answers, I fell down yet anothother rabbit hole looking for clues. Turns out Bryan Dilionnis is a ghost writer for many of the bands we all have in our playlists today, and was a major role in the writing process of staple songs of the metalcore and commercial metal scene.

Bryan’s most recent deathcore work, “Violent Horror System” (2020) showcased an anonymous vocalist that none of us can get enough of. After studying Bryan for a while, I notice secrecy is a big part of his business model since he doesn’t mention often who he’s worked with or who he’s written for; I guess it comes with the job of being a Ghost Writer, but if you listen for 5 minutes, it’s obvious he’s high up in the ranks and his work and influence is all over the industry.

After gorging on Violent Horror System and Bryan Dilionnis’ entire discography, STP resurfaced on my radar making their rounds with their new album “Kostolom” and I found some parts in the album oddly familiar in the writing style. Restoring my faith in the band assuming BD had returned to Slaughter to Prevail, I start catching up on their videos and notice he’s not in the studio update and his name is nowhere to be found. After carefully listening to Kostolom, I notice all the influence from Bryan’s writing style, but also notice Kostolom’s technicality is not the same caliber as BD’s and his solos, therefore this could only mean one thing — not only is STP trying to become the new Slipknot, but the deathcore aspects of the album, in my opinion, were heavily influenced by Bryan’s writing style in his solo project.

But assuming from what we can see on both sides, it’s pretty clear some sort of ego situation is in the way. Alex is the face of the new album being displayed front and center in the cover, and obviously Bryan is the face and front and center of his solo project, which is to be expected from a solo project versus a band setting. If this were to be the case, are egos actually in the way of STP’s musical evolution? Is the reason why Violent Horror System’s vocalist hidden the same reason why STP hides their musicians? Is Bryan sending a hidden message that in his universe vocalists aren’t the focus, just like musicians aren’t the focus on STP, just Alex?

Other than this crazy theory, upon my extensive detective research, there appears to be no bad blood between the musicians as there is no trace of evidence on the internet, but a few questions remain — what happened here, and why these two forces don’t seem to align and coexist when the music could be so much better having this past ghost member back on board? With Alex’s undeniable talent and Bryan’s impeccable writing and playing skills, these two forces would be unstoppable if they finally joined. Could this be a label thing since the same happened with Jason Richardson and Born of Osiris? It’s all happening under the same record label, so no theory is too far fetched. What are your thoughts on this?