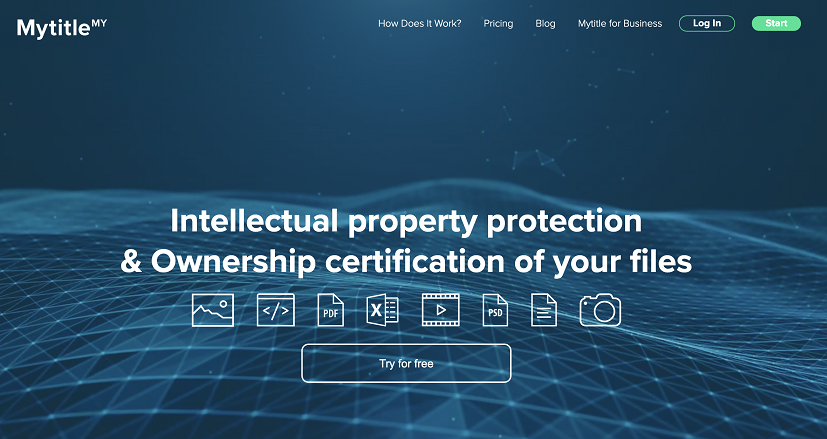 Have you ever thought about the consequences that would follow if someone would steal or abuse your work? What would you do, if your special recipe suddenly appeared on an international cooking channel without your acknowledgement while not having any proof that you are the original discoverer?

Such difficulties may be overcome with a timestamp.  Are you not familiar with such technology? Continue down reading and see to explore what is this cool tech, what is it useful for and how convenient it is for your intellectual property protection.

In times, when technology development sprints miles an hour, we can experience the progress not just every day, but also in a wide range of daily life aspects. If any part of your life does not have its own technology department yet, believe that the idea of it has already risen somewhere in the world. And right there we hit one of the main aspects of this article.

But first, let’s briefly introduce the online digital tool called Mytitle, which was designed for anyone who wants to make sure not to lose power over their own intellectual property and to secure their authorship of a specific document, work, design, idea, ect. Mytitle provides such protection thanks to the above mentioned timestamps, applied in the process of digital file certification.

What is the purpose of timestamps?

A digital timestamp is a technology which generates a digital mark of a document carrying specific date, time and information about the documents owner. Such a form of a mark has a major advantage and that is the fact that it cannot be falsificated or altered. A digital timestamp provides you with solid evidence of information.

The lifespan of a timestamp

Official certification authorities issue timestamps of a 3 to 5 years lifespan. This period could be prolonged according to the specific conditions stated by the authority based on the assessed fee. Mytitle timestamps, authorized via blockchain encryption are valid for life without any extra fee needed. You buy your timestamp once and you get the eternal proof for your document ownership.

The ownership certificate from Mytitle contains all the necessary information. The date and time, and by whom the specific document was certified. Compared to the official timestamping standards this represents a much easier procedure since you do not have to issue or pay for another electronic signature for the certification completion.

Mytitle is fundamentally different from certification authorities thanks to the blockchain authorization of the issued timestamps. That means using a fully decentralized system. Official authorities have to confirm their issued timestamps by centralized authorities though long and demanding certification processes. Mytitle and blockchain are completely independent of each other so your timestamp could not be compromised but still could be used by anybody and anywhere for a document ownership verification.

Certification authorities have limited application territory. For fact, government institutions can reach the verification system only within the European Union countries. On the other hand Mytitle can issue ownership certificates anytime and  anywhere in the world. Also you can choose any moment to verify the information on the certificate. All you need is internet access and the certificate link to view the information on blockchain.

With Mytitle it is possible to get an ownership certification without further obstacles.

The certification tool Mytitle provides protection of any digital documents fast and from anywhere in the world. The whole certification system takes place online so at first it means that it saves the time and travel costs, which eventually would be spent on a journey to the lawyer office.

When and how are digital timestamps useful?

Mytitle is unique not just for the certification system efficiency but also for the user journey sophistication. The application is simple, flexible and very fast. It is the Mytitle platform where anybody can find safe space to protect their documents and data before anybody infringes them.

Getting the ownership certificate of your files on Mytitle.com is perhaps the easiest way to assure solid proof of your original work or data authorship in cases of intellectual property theft.What’s more, it will also save your time and energy that a potential law case would cost you.

Real Estate With Nigel Nethersole: His Take on the Compatibility of Lifestyle and Community