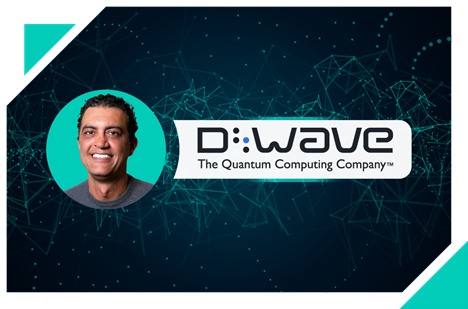 Emil Michael joined Emily Chang on Bloomberg TV on Feb. 8 to discuss DPCM Capital’s groundbreaking acquisition of D-Wave Systems. The $1.6 billion transaction, which will take the Canadian quantum computing business public, will strengthen D-Wave’s grip on everything from pharmaceuticals to government.

The newly formed parent company of D-Wave and DPCM Capital will debut as D-Wave Quantum Inc. and trade under the ticker symbol QBTS on the New York Stock Exchange.

“What I liked about D-Wave is they actually have products in the market today,” said Emil Michael, who says he is a fan of quantum computing. “So this is not a, ‘Hey we’ll have a product five years from now, and its an R&D company.’ It’s serving clients like Volkswagen and Save-On-Foods. It has 12 big Fortune 1000 clients, so quantum computing is here today for D-Wave and that’s why I like it.”

Emil Michael added that he feels the golden age for quantum computing is here. It’s become a tremendous area of focus for Emil Michael, who continues to keep an eye on the latest technologies that are going to fast-forward artificial intelligence, deep learning, and robotics.

Although D-Wave is considered an underdog in its field, there are several factors why Emil Michael finds it a good bet. Founded in 1999, D-Wave has more than 180 employees and counts auto giant Volkswagen and pharmaceutical powerhouse GlaxoSmithKline among its customers.

D-Wave is gearing up to commercialize quantum computers. D-Wave Systems president and CEO Alan Baratz told bloomberg.com that although the company currently has revenue, becoming cash-flow positive is on the horizon as product development continues.

“The annealing approach doesn’t solve every problem that quantum might solve, but it can solve about $100 billion worth of total adjustable market problems and no one else has that approach,” Emil Michael says. “D-Wave also has a fresh look at the world with its brand-new leadership team. Alan Baratz is an incredible leader who is very commercial and technically deep.”

Baratz will remain in the position, according to bloomberg.com. Baratz sees D-Wave’s move to go public as an opportunity to move beyond theory and allow quantum computing to gain momentum and offer business solutions.

When Chang pressed about the future of ride-sharing apps, Emil Michael offered an optimistic prediction.

“You’ll see revenue from both Uber and Lyft on the ride side exceed pre-pandemic levels in Q4,” Emil Michael says. “I think Lyft just proved that from a revenue standpoint because prices went up. You’ll see prices moderate in 2022. Riders will come back and you’ll see this business growing again. No one who lives in a city can actually live without one of these services anymore. People have been home and haven’t been going to work. So as that moderates back, I think you’ll see recovery in the rides business for both companies.”

Regarding the future of Uber, Emil Michael believes a leadership wake-up call is in order. “Frankly, I think they need to have a management change,” Emil Michael says. “The stock now is where it was in 2015. That’s seven years ago. The business is up and growing, but Wall Street is not rewarding them for it — and there’s a reason. I think they lack confidence that this management team is going to innovate and is going to find cost savings to make it more profitable sooner. And they’ve done a bunch of bad acquisitions that haven’t helped.”

Michael adds Uber’s current CEO Dara Khosrowshahi’s first five years at the helm is up this summer, and that could bring on a reckoning. “I think it will be a point for the board to look up and say this company went public at $45 a share, where is it today? What are the goals and have we hit them? Is this the right team to take it forward and gain momentum? Seven years is a long time for a stock to wait to get back to EBITDA.”

Emil Michael Shares His Perspective on the Future of Uber Eats

Still, Uber has its bright spots that it needs to continue to capitalize on, says Emil Michael. “Eats is a great business. Thank God we started it way back when because you see what happens to Lyft when you’re relying on one business,” Emil Michael says. “Eats is a crown jewel. I wish they hadn’t lost the market lead to DoorDash but I think there’s a lot of room to run on Eats worldwide. You see what Gopuff is doing. There are a lot of angles you can take that business. I like that business and I hope they regain the market share they’ve lost over the years.”

THE RISE OF WELLNESS IN TRAVEL WITH MAIKEN ARIANA