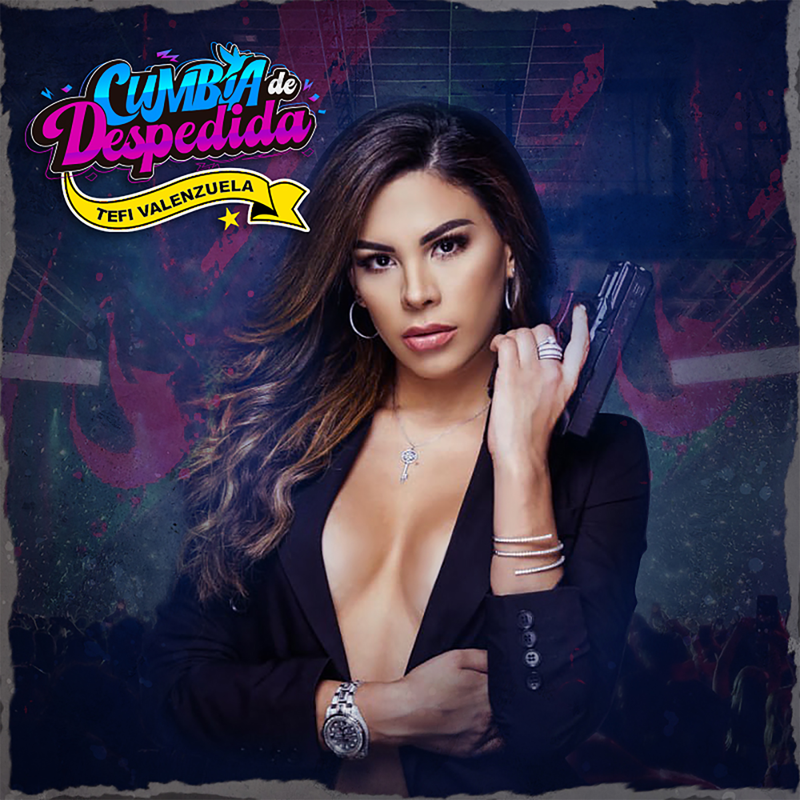 Now you can listen to the brand new preview of her next EP on all digital platforms. Do not miss the official video starring Leonardo Alvarez and Carlos Puente “Pompeyo”, both widely recognized for their role in the series El Señor de los Cielos.

“Cumbia de despedida” is the second preview of Tefi Valenzuela’s upcoming EP, Cinco Cumbias, a collection of songs based on her personal experiences. This song was composed by Tefi in Medellin, Colombia, together with a team of Colombian, Mexican, and Venezuelan producers and composers, who wrote the lyrics and melody for the singer’s real-life story. This time, she’s telling us how to say goodbye to a relationship with someone who is lost in alcohol addiction. Her intention is to reach the public with a message, encouraging the youth to think through before they become victims of alcoholism.

“I experienced a catharsis while writing this song. I had just ended a relationship that deeply pained me because, despite my attempts to save it, my ex-partner’s alcoholism made me reach a point where I understood that I had to step away for my own good. I remembered not only my story, but also the story of many of my friends that at some point were with men that had a serious problem with alcohol. It is a disease that is denied by many, while it destroys them little by little. Along with them, they drag the pain of everyone that surrounds them,” said the singer, talking about the inspiration for this single. “I believe that all addictions are harmful and bad, but since alcohol is legal and regarded as normal, many do not notice the thin line between having a few drinks from time to time, to always drinking in excessive amounts, which puts them in situations where they are denigrated by the people around them. I think that alcohol is the engine for doing things that they might regret later, because they are not aware of what they do and they do not even remember about it the next day,” she added. That is why this song portrays that loneliness, anguish, and the decision of not believing in any more promises for your own good. “I sing for all the women that have suffered that hell, I do not even wish it upon my worst enemy”

She started in the industry as a model and television host in 2011, and in 2018 she began her music career with reggaeton. In 2019, she released “Algo enfermizo”, where she showed off her skills as a composer. In 2020 she released her first EP Cinco Cumbias, five songs composed by herself in Miami, Mexico, and Medellin, with the help of great producers and collaborators. “Cumbia de los Infieles” was the first single preview, and now you can listen to the second one, “Cumbia de Despedida”.

Related Topics:Tefi Valenzuela
Up Next

Changing Your Life – For The Better & Forever

Ahmad Atieh & Mustafa Hussain: A brief look into their past and future