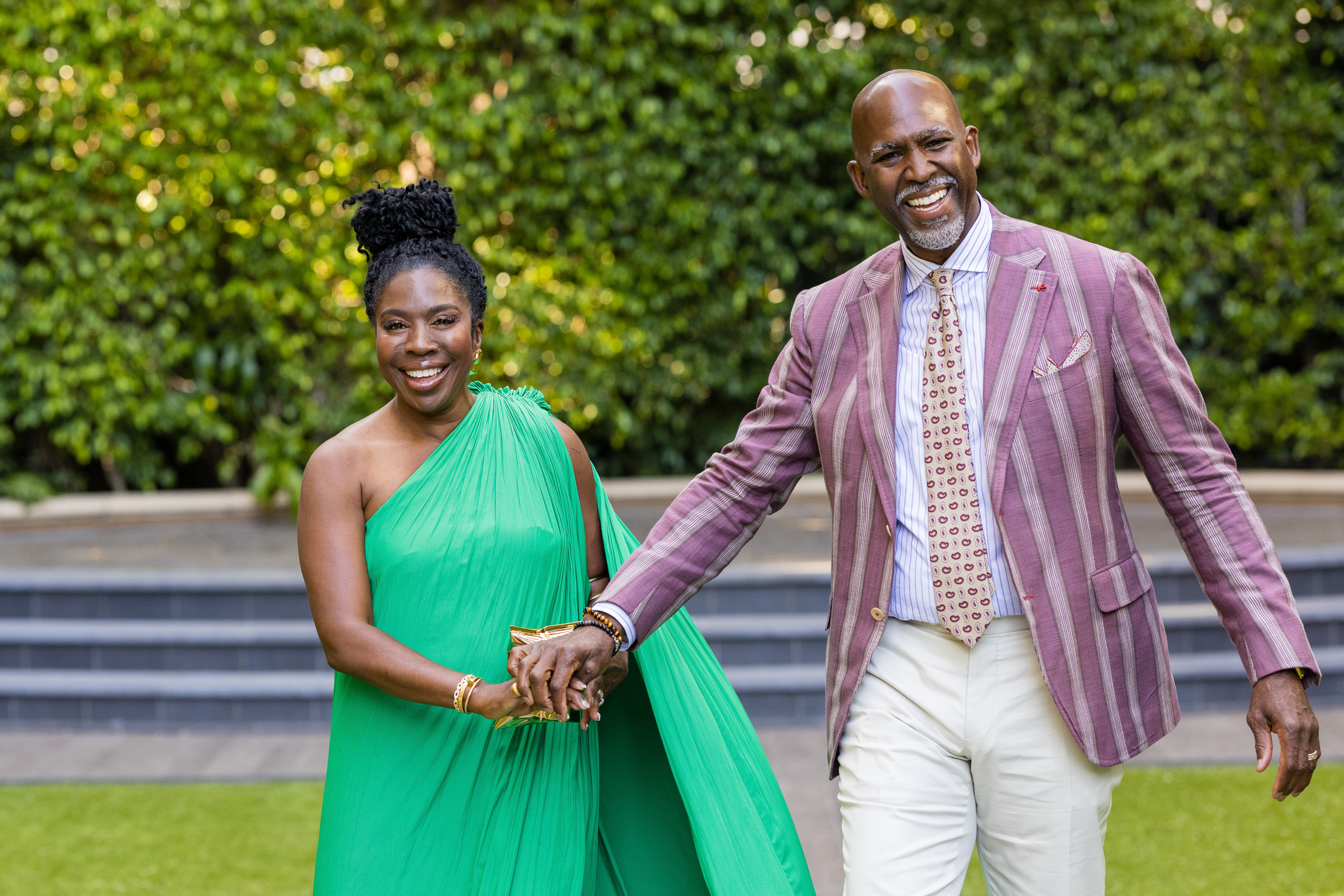 April Smith Jones is the master of the pivot.

Growing up with a single mother in South Central LA on a thoroughfare between rival gangs, Crips on one side, Bloods on the other, bussed 90 minutes to and from the Valley for school everyday, Jones’ odds of making it out of inner-city LA were slim.

Yet she went on to UC Berkeley, then to UC Hastings College of Law to earn a law degree. She married Darryl Jones, a fellow former resident of South Central LA, and together they beat the odds ever further, raising three inordinately successful kids — a USC-educated Grammy Award-winning musician, a rocket scientist who played football for Princeton, worked for SpaceX building rockets and is now getting his MBA in business at Harvard, and a Harvard-educated neuroscientist who was in the top 10 of Miss America contestants.

And to top it off Jones started a law firm with offices in Denver and Los Angeles and built it into a self-running company that affords her time to focus on her passion for helping others.

When we see that level of success in someone, we want it for ourselves. We want to know: What’s the secret?

It’s a question April Smith Jones gets all the time. People look at her booming law practice, coaching and mentoring business, community contributions, marriage of 30+ years and three successful children, not to mention her radiant health, well-spoken manner and impeccable sense of style, and they want a taste of her special sauce.

And she’s more than willing to share. With her children launched into their own careers and lives, she wanted to give back to more people than her kids, friends and a handful of mentoring clients. She wanted to help as many people as possible get out of their own way and have it all — and more. Through the help of business coaching, she grew her law practice to the place where she could work on her business not in it and found the freedom to grow her own coaching practice even more.

“You should write a book,” everybody said.

Considering that opportunity to reach a larger audience and organizing her thoughts for the possibility, Jones realized that while her entire life had been her training ground for success, it was her children who were her first coaching clients and that her hard-earned parenting lessons could have valuable applications for growing a successful business.

For Jones, the system to success is all about learning to pivot. In addition to ideas for a forthcoming book, she came up with the concept of a Pivot Card Deck, incorporating the deceptively simple mindsets and tools she teaches others for doing whatever it takes to get whatever you want.

April Jones is the hottest, freshest voice of reason for this decade, and I recently had the privilege to talk with her in my studio, where she shared a taste of what she has to offer – two of her top pivots, or “Aprilisms” as her friends say.

LIMITING MINDSET: “All is lost. This won’t work.”

PIVOT: “Nothing is Impossible!”

It seems simple, but many people just do not have this mindset.

“You have to get your mind where it’s nimble enough that you’re not thinking of what’s impossible,” Jones says. “You’re thinking ‘What’s my next move?’, ‘What’s my next best opportunity?’ You’re weighing choices quickly because you’ve decided ahead of time that nothing is impossible.”

One place Jones traces learning this pivot is from reframing the circumstances of her youth. “Maybe you had a bad experience, but how do you get where you’re supposed to go anyway?” she asks. “You do that with the mindset that nothing is impossible.”

“And that’s how you change your circumstances,” Jones says. “That’s how you differentiate yourself from people who stop, who are stuck, who never make it to the next level because they did not think they could.”

Never tell yourself or anyone else what’s impossible. Instead, ask what it would take to make it true.

LIMITING MINDSET: “I don’t have time. We can’t do that.”

Jones said a hard yes to opportunity for a full year, and it changed her life.

She had been successfully growing her law practice for 18 years, but when she said yes to the opportunity for business coaching, she immediately skyrocketed her business, quadrupling it in only two years (even through the lock down) and created a self-running organization. Her law firm is still experiencing exponential growth and she personally is coaching more business owners and entrepreneurs than ever.

“I know there’s always a way, but still I only know what I know,” she says. “You have to know who else to talk to, and that can catapult you to a new place, from a business that’s doing well to one that’s quadrupled and you don’t even have to be in.”

In addition to the business coach, Jones said yes to personal brand coach and a speaking coach. Now she gives back in the way she always wanted to do instead of just talking about it — through workshops, speaking engagements and mentoring, the Pivot Card Deck and a forthcoming book.

“When you can, say yes to opportunity rather than shrinking from it,” she says. “Say yes, even if it requires that you venture into something unfamiliar or uncomfortable. Say yes to taking yourself to the next level.”

Jones stresses that it doesn’t matter what your background is or where you were born. What matters is learning to see opportunities that are invisible to other people and surrounding yourself with coaches and advisors who can see futures that might be invisible to you.

Her 12 Time of Your Life pivots help people do that. When clients work with Jones, they can expect an onboarding session, a full-day coaching session and a follow-up integration. She and her team provide clarity, confidence and vision for the future plus a clear path to getting anything you want. She also offers group pivoting coaching and workshops and speaks to groups and organizations. Her website offers downloadable tools and resources for starting the journey on getting the life that you want.

April Smith Jones has the formula for getting it all, having it all and getting even more. Whether you want to find ways to build and grow your business to run itself, like she did, or solve a personal or professional problem, Jones knows how to make it happen. Check out the full podcast interview here and download your FREE set of Pivot Cards!

Serial Entrepreneur, VC and Angel Investor, Judge on Entrepreneur.com’s “Elevator Pitch”, Forbes and Entrepreneur Writer, 13-Time Bestselling Author, Mike Koenigs helps “Experts Build Empires” and "Category of One" personal brands. He works with business owners and entrepreneurs so they get PAID for BEING, instead of DOING by elevating their status, authority, thought-leadership and message to create more impact, income and freedom. His companies have helped over 58,000 customers in 156 countries get noticed, amplify their message, create awareness, productize their knowledge, become bestselling authors, in-demand speakers and media masters to gain attention and engagement. He's helped over 1,800 business owners become bestselling authors. As a serial entrepreneur, his first exit, Digital Cafe, one of the first digital marketing agencies, was sold to the publicly-traded Interpublic Group. His next two, Traffic Geyser and Instant Customer, were SaaS companies, were sold to publicly-traded companies. His fourth business was sold last year to a private buyer. He’s a regular contributor and columnist for Entrepreneur, Forbes, and Fast Co. magazines and interviewed, consulted and advised celebrity clients, billionaires and bestselling authors including Tony Robbins, Paula Abdul, Richard Dreyfuss, Dave Asprey, JJ Virgin, Presidential Candidate Tim Ryan, John Assaraf, Brian Tracy, XPrize founder Peter Diamandis, Jorge Cruise, Harvey Mackay, Daniel Amen and Darren Hardy. Mike's goal is to elevate you, your brand, business and message in a way that honors who you are and makes you wake up excited and motivated to inspire and change lives. Mike will help you manifest Your Goals… following a specific and proven process that allows you to BE…