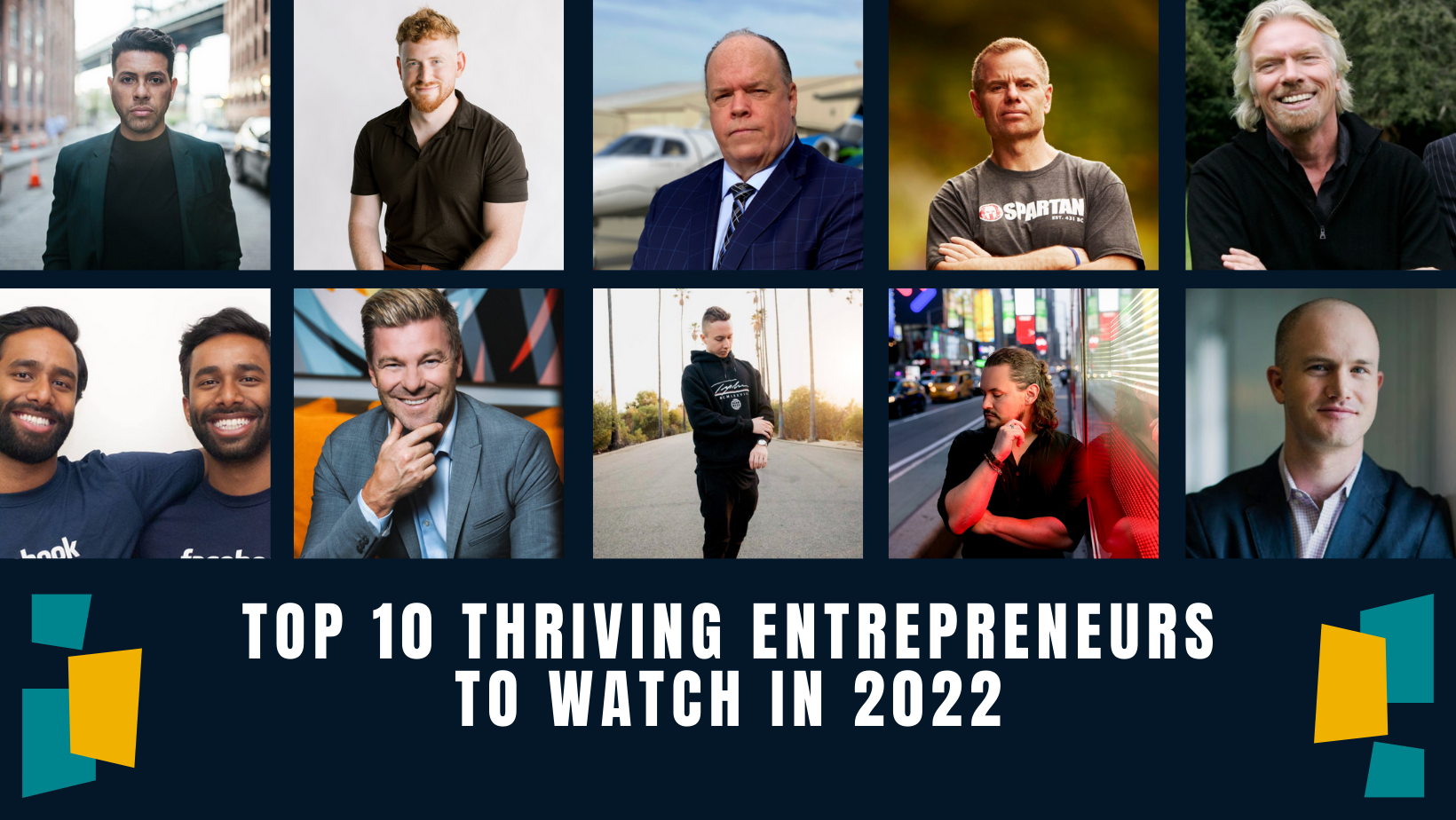 The past two years have been a significant challenge for business owners across the world. The global pandemic has disrupted work cultures and supply chains, leaving many wondering what they will do next; however, this unique environment has also sparked creativity, thrusting innovative entrepreneurs into the spotlight. Who are the top 10 thriving entrepreneurs to watch in 2022? Learn more about the rising stars in the business world below.

He was inspired to go into cryptocurrency after seeing the devastating effects of hyperinflation in Argentina. He went on to work as a developer at IBM before joining Deloitte as a consultant. He learned about Bitcoin and joined the Y Combinator program with a platform to buy and store digital currency. After earning an investment from Y Combinator, he started Coinbase, which has grown into a massive trading platform used by countless people today.

Sigurd Vedal is an entrepreneur, business coach, financial investor, and motivational speaker who has started and grown multiple businesses, including Digisec Media Group. He has 35 years of experience starting and growing businesses, with multiple brands in 35 countries. During his journey, he has accumulated knowledge and wisdom, spending his time sharing it with others.

Now, he spends most of his time speaking to others about how they can follow in his footsteps. He holds conferences, mentors young entrepreneurs, and even opened his own university to teach others how to navigate the business world in the current climate. He has countless followers on numerous social media platforms and continues to run multiple businesses even to this day.

Best-known as the founder of the Virgin Group, Richard Branson is an English business magnate, author, and investor who runs more than 400 companies scattered across various industries. Even though he is known as someone who is interested in private space travel, he has spent decades running multiple successful companies in countless areas. He started his first business, a magazine called Student, when he was 16. He also opened up a chain of record stores, called Virgin Records, which later became Virgin Megastores.

In the 1980s, he started his first airline, Virgin Atlantic, which would later become a company that explores private space travel. He also founded the Virgin Rail Group when the British rail system was privatized. In recognition of his success, Branson was knighted at Buckingham Palace in 2000.

The founder of Elite Daily, Gerard Adams is an entrepreneur from New Jersey. He grew up in a lower-middle class household in New Jersey with his parents and sisters. His mom was a manager at a supermarket and his dad worked for Prudential. After dropping out of college, Adams founded a website called StockSpot.com, which grew quickly, but crashed when the economy tanked in 2008.

Even though he was in the depths of despair, he picked himself up and tried again. This time, he founded Elite Daily, which became a massive success. His website garnered 80 million monthly visitors, and he eventually sold it for $50 million to Daily Mail. Even though he could have relaxed for the rest of his life, he decided to work to educate millennials. That is where Leaders Create Leaders was launched, and he spends his time helping other entrepreneurs build businesses like him.

If you have heard anything about Spartan and Death Race, then you have heard about Joe De Sena. A successful CEO, author, and trainer, Joe De Sena grew up in Queens with his mother, who loved yoga, and his father, a business owner. He always wanted to be a businessman, and he knew he was interested in fitness. His first business was selling fireworks. Then, he sold t-shirts. He even cleaned pools for a while, earning more than 750 customers.

After attending Cornell University, he sold his pool cleaning business for $500,00 before launching his career on Wall Street. During his desk job, he gained weight, and knew he needed to get healthy. He started Spartan Race and Death Race, which became a massive success. The races remain popular to this day, and Joe De Sena has also become a best-selling author, with books such as Spartan Fit, Spartan Up, and the Spartan Way.

J.D. Netto (Jorge de Oliveira Netto)  is a writer and artist who launched J.D. Netto Designs in 2013. He always knew he wanted to be an artist, and desired to follow in the footsteps of Tolkien and C.S. Lewis. His first novel, The Whispers of the Fallen, helped him launch his first creative design agency.

His brand has expanded into a multitude of areas. He has worked with countless artists, helping them brand products and services, and recently worked with Cellogram and Jen Majura from Evanescence, creating music for Henderbell. His latest release, The Broken Miracle, inspired an album by Paul Cardall, featuring Tyler Glenn, David Archuleta, and Thompson Square. With the representation of Susan Velazquez at JABerwocky Literary Agency, one of the most prestigious in the industry, the future is nothing but bright for a talented creative such as J.D. Netto.

His agency has grown into a household name that continues to create astounding globally recognized projects with ambitious plans for the future. He has recently joined the Beacon Book Box family, acting as creative director for the brand. With several projects underway in collaboration with AMG Agency and following in the mentorship and guidance of Brazilian marketing guru Marcelo Goulart and the social skills of Maiara Oliveira from Ideally Social, J.D. Netto is a name we will certainly be keeping up with.

Discover more about J.D. Netto and keep up with his journey on Instagram!

Matt Thomas is the CEO, founder, and visionary leader of AlphaX, which is a company that focuses on helping people change and elevate their mindsets and lifestyles. Everyone has a limited amount of time here on Earth, and many people spend their lives going through their routines aimlessly. If you are tired of working a job you hate and losing all control and autonomy over your life, then you need to find a greater degree of fulfillment.

AlphaX can help you do that, by living as your Alpha self. The company creates wearable products that remind you of your decisions, goals, and dreams, helping you live your best life possible. The company is soon to be launching a documentary to help you learn more about how to do exactly that!

Discover more about AlphaX, and follow the founder, Matt Thomas on Instagram to keep up with the exciting new releases!

If you too have a love for man’s furry best friends, then you have probably heard about Kabo Fresh Dog Food, or recognize them from Season 15 of CBC’s Dragons Den after securing a deal with Venture Capitalist, Michele Romanow. Vino & Vijay Jeyapalan are the names behind the brand, and they brought more than a decade of experience to their fresh dog food delivery startup.

In 2018, twin brothers were sad when they lost their dog, Kabo, to stomach cancer. They decided to figure out why she didn’t live as long as other dogs, and the brothers started their mission to give dogs healthier diets in an effort to extend their lifespans and improve their quality of life. Now, Kabo Fresh Dog Food is a subscription service that delivers amazing fresh food right to the front doors of customers making mealtime for dogs easy and enjoyable again across Canada.

Discover more about Vino & Vijay Jeyapalan and Kabo Fresh Dog Food, on their website or Instagram for the latest news and new product releases!

If you love food subscription services, then you’ll really love Ethey, the industry-leader in meal delivery sustainability. Founded in 2015 by hospitality veteran and entrepreneur, Nick Spina, Ethey’s goal is to deliver fresh, never frozen meals from their kitchen to yours. The company’s team of executive chefs offer 100+ different meals for subscribers with various health preferences including vegan, keto, and gluten-free.

The fast growing e-comm brand has been joined by Gary Vaynerchuk as a partner and advisor, with the ultimate goal to avoid 1 billion pounds of food waste. Ethey operates out of a zero-waste facility, where all left-over food scraps are delivered to an on-site worm farm, producing natural fertilizer that is delivered back to the farmers who supply the meat and produce, making a 360° partnership program with 0% food waste.

Frederick Penney is the host of the nationally syndicated show Radio Law Talk that is arguably one of the most successful law talk shows in the country.  Frederick Penney has also partnered with top lawyers across the country to handle cases through his national law firm Penney, Galbraith, Elder and Brannen.  Frederick Penney has also been designated as a Northern California Super Lawyer for many years and has been rated the highest an attorney can be rated by the Judiciary and peers from Martindale-Hubbell, one of the most prestigious lawyer rating companies in the United States. He has also opened numerous law offices throughout California including Irvine, Santa Clara, Sacramento, Rocklin, Chico, and Roseville. Frederick Penney and his highly experienced and skilled former insurance company trial lawyer partners have handled thousands of personal injury cases including some very notable high profile cases.

How Dre Mudaris and Children To Wealth Advocate for Financial Literacy

How Brandon Nguyen Mastered a Blueprint to Financial Success