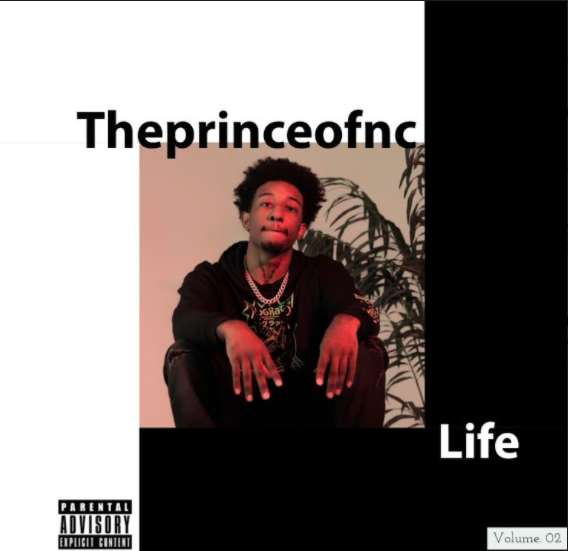 Just months ago after the musician Theprinceofnc released his anticipated album “Life”, he quickly followed up and released “Life 2” which does not have any features.

The album consist of 8 tracks that clock in all under 30 minutes. Majority of that time was filled with bangers and head bops.

I did not like “Stupid love song” orMe And My Bitch”.

The 1st track, “The Prince Story” was first to stand out. The song has a unique flow, and Theprinceofnc story telling is just amazing. The chorus here is also very catchy.

“Like Dat” follows and keeps the same energy as Nasty. Theprinceofnc hook is really catchy and does a great job explaining what he has gone through. I usually don’t support the “side guy” hype but I have to admit, this song is actually great.

“Alphabet” is also a pretty good follow up. Theprinceofnc first round A through Z was quite good , but the second round could of been better. Any artist who can rap there abc’s twice and make a song out of it , has potential to be great. Many artist can’t do that, and if they can, the song is probably not oh so good.

The great streak has not to be last now. The upcoming song is , “Stupid Love Song” which is awful. Simple and plain, its just not good. The track is 70% instrumental and the engineer who did the mixing and mastering should be fired.

“9 PM” follows, and sounds solid. Theprinceofnc tells a story about a girl named Taliyah who is going through hard, rough times. The story sounds realistic but I cannot verify if its real or not. I feel like those issues he discussed, are real and it’s happening more than we actually realize. If you have not heard this track, you should. Even many rappers got offended and feel like they can put up a fight.

“Twenty Twenty” follows and is another good song. Although, i wish the song could be a lot longer than 1 minute and 30 seconds.

Overall , the album is half way good and out of 10, I’d rate it an 7 out of 10 because The Prince Story, Nasty and Like Dat really carried the whole 8 track album alone . I wouldn’t go out my way to play the whole album but I have downloaded majority of these tracks . However, i would definitely check out the tracks listed above, especially “Like Dat”

Why DaKidRiz Should Be Within Your Radar