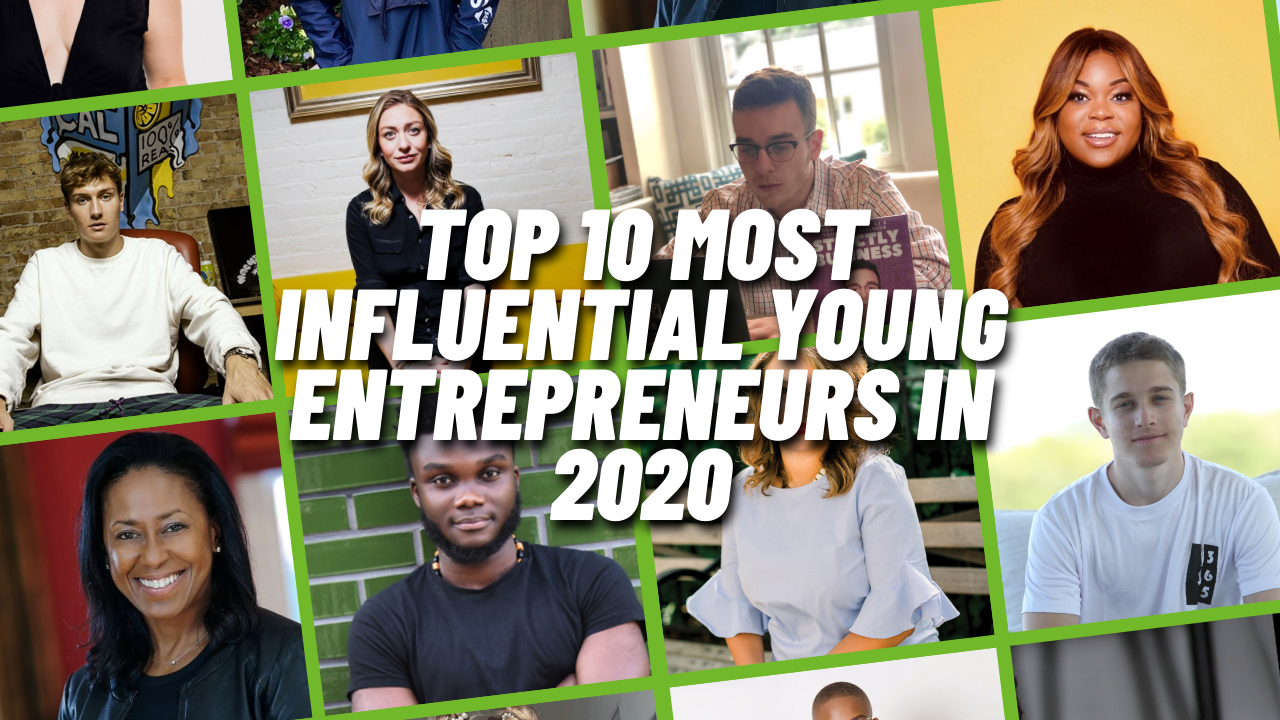 Top 10 Most Influential Young Entrepreneurs in 2020

Though the year 2020 started with one of the deadliest natural disasters in the form of the coronavirus, it has also witnessed young entrepreneurs reach new heights. These entrepreneurs prove that the future will be exciting, profoundly different, and full of creativity and innovation. There are numerous inspiring resources available online that these young people use to imagine and materialize great ventures that ultimately solve real-world problems. These entrepreneurs were just ordinary people until embarked on their business journey and began to have a widespread influence on the world.

Here are the top 10 most influential young entrepreneurs in 2020:

Born on July 1, 1999, Whitney Wolfie Herd, is a successful entrepreneur and business executive from America with a net worth of $290 million. She is the founder and CEO of a social and dating app, Bumble, which, according to Forbes, is valued at more than $1 billion in 2020. Wolfie Herd founded Bumble in 2014, which subsequently launched two other apps BumbleBFF, an app for finding friends, and BumbleBizz, a professional networking app, in 2016 and 2017 respectively. Wolfie Herd, in 2014, was listed Business Insider’s 30 Most Important Women Under 30 In Tech. She was also named as one of Elle’s Women in Tech in 2016. Wolfie Herd was listed in Forbes 30 Under 30 in 2017 and 2018. Her name was also included in Inc’s 15 Female Entrepreneurs To Watch Out For in 2017. Furthermore, Wolfie Herd was featured on the covers of Forbes, Wired UK, and Fast Company. Whitney has changed the game of online dating and has made a huge impact in the digital space.

Cole Bennet is a prominent business executive, videographer, and music video editor from America. He was born on May 14, 1996, and is well-known for his multimedia company Lyrical Lemonade. In 2013, when he was a high school student, Bennett, with the help of his mother, founded Lyrical Lemonade as a Youtube channel, which subsequently became a successful company. Lyrical Lemonade has contributed to the success of several rappers such as Lil Pump, Smokepurpp, Juice Wrld, Ski Mask the Slump God, YNW Melly, Lil Tecca, NLE Choppa, and Jack Harlow. Bennett directed Ski Mask the Slump God’s 2017 “Catch Me Outside” music video which became one of Pitchfork’s favorite music videos of the 2010s. Every year, Bennett hosts Summer Smash, a music festival presented by independent Chicago-based event production label SPKRBX. Besides that, Lyrical Lemonade has created merchandise and Lemonade beverages and has collaborated with various other brands such as Jordan Brand and FTP.

Marah Lidey is the Co-founder and Co-CEO of Shine inc., a self-care app for millennials that sends them encouraging messages focused on calming anxiety and stress. As of August 2020, Shine has over 100,000 downloads on Google Play Store and is widely downloaded on Apple Store as well. Overall it has a rating of 4.8 and 4.7 on Google Play and Apple store, respectively, which proves its effectiveness and how helpful it is in achieving its goals. It has millions of active users and has raised millions of dollars. Lidey aims to help and motivate people to live their best and fulfilling lives with a positive mindset. Lidey previously directed mobile and social for brands like DoSomething.org, American Express, and Viacom and is a World Economic Forum Global Shaper and one of the “Top 35 People to Watch in NYC Tech” by Built in NYC.

Timothy Armoo is a passion-driven and inspiring young entrepreneur to be looked up to in 2020. He is the Co-founder and CEO of the multi-award-winning company, Fanbytes, an advertising video platform that helps major brands become relevant for Millennials and Generation Z. The company has developed a chain of online communities and influencers entertaining millions of teenagers worldwide. Fanbytes work on crazy campaigns on popular social media platforms such as Snapchat and TikTok with well-known brands such as Apple Music, Sony, YouGov, Deliveroo, Warner, and Universal Studios and even the government. They have redefined how brands communicate with Millennials and Generation Z. The company is a pathfinder in its field and has won recognition from Forbes, Adweek, Business Insider, the Huffington Post, and several others.

Lisa Skeete Tatum is a passionate entrepreneur working to help women in the workplace deal with various challenges. She is the founder and CEO of Landit, which is a technology platform dedicated to empowering women in the workplace. Landit also helps various companies to attract, develop, and retain diverse talent. Landit provides a guidebook to women, including all the resources and knowledge they need to navigate their career path successfully. Previously, Lisa was a partner for a healthcare venture capital firm Cardinal Partners, for over a decade. She has been featured in the Forbes, Fortune, Wall Street Journal, and BBC Business and was listed in the Most Impressive Women Entrepreneurs of 2016 by Inc. magazine. Fast Company, in 2016, named Landit as one of the Top 10 Innovations That Made Women’s Lives Better.

Ben Francis, born in 1992, is a British entrepreneur and businessman. He is the founder and majority shareholder of fitness apparel and accessories brand Gymshark, headquartered in Solihull, England. As of August 2020, he has a net worth of around $900 million. Before launching Gymshark, Francis ventured into a company that sold car license plates and developed two fitness applications as well, which were available in the iOS App Store charts. In August 2020, Gymshark sold a 21% stake to US private equity firm General Atlantic in a deal that valued the company above $1 billion. Francis owns more than 70% of the company.

Growing up during worldwide movements such as #MeToo and #BlackLivesatter, Gen Z can be credited as one of the most ethical-minded and progressive generations. At age 16, Nina Rauch created the charity, pink week, after her mother’s cancer diagnosis; she was subsequently named one of Barclays’ Future 100. Her social enterprise, Pink week, works to spread awareness among young people about breast cancer and has raised over $500,000. Raunch believes that young people can positively impact their field of endeavors by raising significant amounts of money. Raunch also founded her second social enterprise, a refugee organization in 2017, and runs Social Impact for Lemonade, an insuretech company based in Tel Aviv.

Eli Zied is the founder and CEO of the clothing brand, Habits 365, which aims to encourage positive habits all year long while disrupting the apparel industry. Habits 365 is a thriving lifestyle brand that has found support among various celebrities and influencers and its customers are growing every day. Zied co-founded Habits 365 at age 17 while he was still a high school student. The other co-founder is his brother, Spencer Zied currently acts as the COO and CMO of Habits 365. Besides running a successful business, Zied is also a college student and maintains good grades. The duos thriving clothing business has set the bar high for the streetwear industry.

Angelica Nwandu, from Nigeria, is the founder and CEO of The Shade Room, Instagram’s 3rd most engaging profile. The Shade Room focuses on celebrity gossip, politics, and black culture news, and has over 20 million followers across all social media platforms. In 2016, Forbes included her name in its 30 under 30 and said that she, with her Instagram-based company, The Shade Room, has revolutionized celebrity gossip. In 2015, Techcrunch included her name in its list of “18 Female Founders Who Killed It in 2015″. According to BuzzFeed, Nwandu is figuring things out faster than everyone else”. Complex called Nwandu as a Celebrity Culture Servant, and Refinery 29 dubbed her “The Oprah of our generation”.

The Botox Lady Opened Her Medical Spa And Aesthetics After A Set Of Unfortunate Events: Today, Her Beauty Business Grows Even During The COVID-19 Pandemic