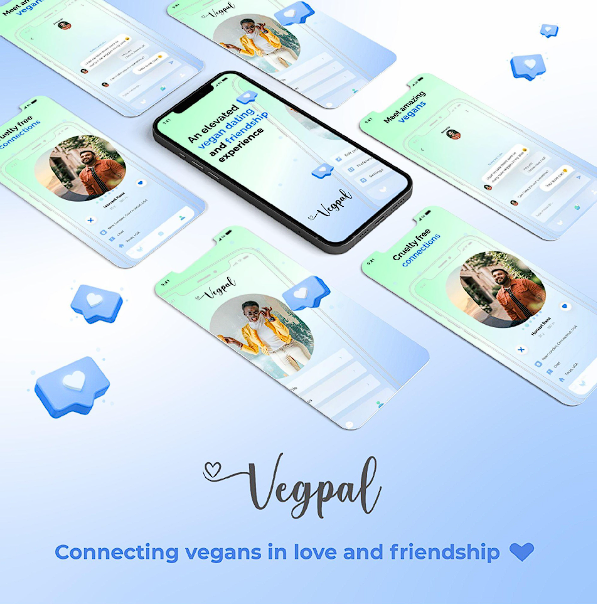 There are millions of people around the world who live a vegan lifestyle, and that number is growing all the time. According to market research firm Ipsos:

Veganism in the US has grown from obscurity to become a mainstream part of the American diet. Since 2004, the number of Americans turning plant-based has reached 9.7 million people, growing from around 290,000 over a period of 15 years.

Veganism is more than a simple dietary choice – it is a lifestyle, and until recently there has never been a dating and friendship platform that has allowed vegans to find other like-minded people to build a community in which they can share their lifestyle and values.

Vegpal was launched in August 2021 to address this core issue. As a free community app for vegans, Vegpal has a mission to empower the individuals that make up the animal rights and vegan movement by connecting them through love and friendship. And in a little over a year, the app has grown significantly, helping thousands of vegans meet friends, find a relationship and connect with their community.

As founder Dahlia Eisenberg explains, developing and launching Vegpal was not simply a way to fill another niche in the dating app space. It was a mission-driven decision, a response to challenges the Vegpal team saw as veganism continues to grow into widespread acceptance within a larger society.

While veganism is not dogmatic, it is a particular lifestyle that can create isolation both for people who have been vegan their entire lives and those that are coming to veganism later in life.

“It can be very isolating when you go vegan and then suddenly you have this lifestyle that is often quite different from your family, your co-workers, even some of your friend groups,” Dahlia says. “That can be disheartening, so it is important to find people who believe the same things you do and to grow your community.”

Vegpal provides a private and safe dating and friendship app made exclusively for vegans. Prospective members can download Vegpal and join the app after answering a few screening questions and going through a quick verification process. Because of their ongoing commitment to the safety and privacy of their app, the Vegpal team manually screens every application, preserving a community that shares the vegan lifestyle. As a result, Vegpal is quickly emerging as the go-to resource for vegan friendship and dating.

The Vegpal team made the decision to open Vegpal to both dating and friendship after listening to feedback from early users. Many were seeking a place not to connect romantically but to find friends and build a stronger community. Users create a profile where they can add photos, interests, and ambitions, and they have the option to select a “Dating” or “Friendship” option depending on the connection they are seeking. From there, they have the freedom to meet and match with other vegans, building a fun and exciting community.

As more people turn to the vegan lifestyle, Dahlia says, it is important that they can find places where they feel secure and welcome. With Vegpal, that platform has finally arrived.

“It is important on an individual level for your mental health and wellbeing to be able to join a community,” Dahlia says. “It also strengthens your resolve and makes you more confident to become a great advocate for animal rights worldwide.”

StackZone is Transforming the Way Complex Organizations Get Work Done