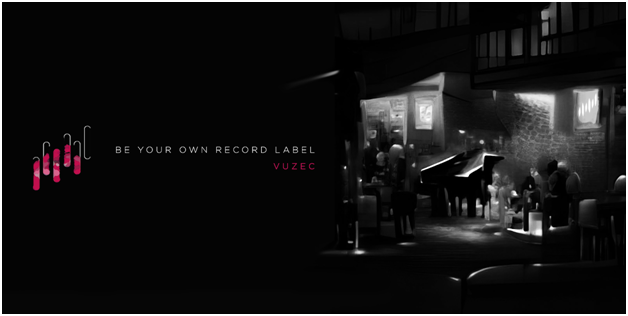 We all know exceptional musical talent when we hear it. Perhaps we are walking down a busy downtown sidewalk, lost in thought, and we hear an unforgettable voice accompanied by the strumming of a guitar. Maybe we are lucky enough to catch the mesmerizing performance of a singer in a local cafe. When we do, we immediately know that the artist is going places. All they need, we think, is the right record label to come alongside them and amplify them to millions of listeners around the country. We listen to the artist a little longer, compliment them, and move on. Maybe we stumble onto their album one day and remember when we first heard them.

Stop. Rewind. That’s yesterday’s music scene. Today, because of Vuzec, the music world faces a very different reality, one in which all of us have a far bigger role to play than simply buying an artist’s album. We are now investors in the career of that artist and may even profit off their royalties. Makes you want to sit down again and listen a little more to the artist, doesn’t it?

First, the basics. Vuzec is a music assetization platform that empowers individual artists and collectives to be their own record labels. Traditionally, the music industry has operated on the idea that  “artist + record label = success.” However, Vuzec is rewriting the equation to be “artist + fans = success.” The big record labels no longer factor into it.

The new relationship between artists and fans centers on the blockchain, which Vuzec is using to facilitate shared music ownership. By using cutting-edge technology, Vuzec has created a one-stop shop that lets artists release their music to fans on all traditional streaming platforms.

The biggest development is that artists no longer have to sign away their rights or give up a painful percentage of their royalties to record labels. Instead, Vuzec acts as a “crowd label” and is using the blockchain to tokenize artists’ royalty streams. Fans can buy those tokens. You can see where this is going: by purchasing the tokens, fans actually own parts of the albums’ royalties, which is potential profit for them.

Welcome to the new age of music. While traditional record labels are not going to go away overnight, Vuzec’s innovation and the ability of fans to invest in their favorite artists still represent a seismic shift in the music world. It’s going to be interesting, to say the least, to see how Vuzec and its platform transform a music space accustomed to the massive PR campaigns of record labels.

The impact of Vuzec is already being felt. Since launching in 2021, Vuzec has on-boarded dozens of artists. Its next step in its mission to transform the music world will be its show on June 22 in New York City, where some of its artists will perform live. For those fans who have already started investing in their artists, seeing them perform on stage will be a completely different experience.

A week later on June 30-July 1, Vuzec will facilitate a two-day Metaverse concert at the Celestial Music and NFT Festival, with fifteen artists performing live. Over the remainder of the summer, Vuzec will release the music of thirty more artists. In the meantime, it continues to onboard artists and collectives onto its platform, including two DJs from Dim Mak Records and 1331 Recordz’ Shontelle Layne.

So, if you think that the blockchain and shared music ownership are just trends that will soon fade, think again. Remember: the next time you are sitting in a club and hear an incredible voice, stick around a little longer. Thanks to Vuzec, you might become the artist’s investor, and that could lead to a very exciting ride as you watch them rise to the top of the charts.

Vuzec is an online platform for musical artists at all stages of their careers. It is using the blockchain and Web3 to strengthen the relationships between artists and their fans. Through Vuzec, artists can stream their albums, drop merchandise, and hold IRL and virtual concerts. Fans can buy tokens from the artist, allowing them to receive royalties, watch the artist make music in their studio, get discounted rates on tickets and merchandise, and join a real community that interacts with the artist on a frequent basis.

To be part of the new future of the music industry, be sure to drop by Vuzec’s website, where you can sign up for the company’s mailing list and receive a free ticket to the Celestial Music and NFT Festival. Remember to follow Vuzec on Instagram and Twitter so you can keep up with how it is revolutionizing the artist/fan relationship.