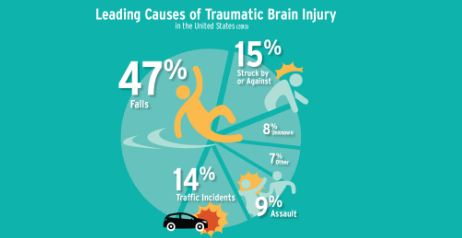 According to the CDC, at least 2.5 million people each year suffer a traumatic brain injury, with various levels of severity. In addition to that, they go on to say that at least five million people will suffer from lifelong complications that directly affect their lives. Sadly, once the damage is done, there’s no taking it back!

The only recourse is to seek just compensation for those injuries, but first it is important to know exactly what is meant by a traumatic brain injury, TBI, and a bit about the areas of the brain impacted. After that, we’ll take a brief look at the leading causes to be aware of. Bear in mind that knowledge is your best protection, so it really does pay to know how to avoid the most common ways in which TBIs are sustained.

3 Ways the Brain Is Affected

Bear in mind that although TBIs vary in severity, they also affect different areas of the brain. This is why so many victims rely on U.S. News’ highly ranked legal teams like Romanucci & Blandin with experts representing their clients in all 50 states to get them that just compensation mentioned above. The problem so many legal teams face is in not quite understanding how these injuries have physical, cognitive and emotional ramifications.

Just because a person isn’t paralyzed (physically) doesn’t mean that the trauma didn’t result in a loss of cognition or a fear to be in a similar situation to where the injury was sustained. In other words, the areas of the brain that sustained the injuries control physical, cognitive or emotional well-being and that is something that can often not be reversed for the remainder of a victim’s life.

Leading Causes of TBIs to Be Aware Of

Although traumatic brain injuries can strike anyone of any age, the CDC further states that men between the ages of 15 and 24 sustain the most TBIs. Second to them are children under five years of age and then older adults. With that said, the CDC also noted that individuals over the age of 75 are the most hospitalized and suffer the highest number of TBI-related deaths. As you can see, anyone of any age can be the victim of a TBI and the leading causes are as follows:

While not all falls can be directly linked to another individual or organization, many are the result of negligence such as falls resulting from un-signed wet floors in businesses or being struck by a distracted driver. These are the types of injuries that literally cry out for legal representation because the victim’s life may never be the same again.

The Damage May Not Be Immediately Noticeable

There is one last thing to be aware of when it comes to traumatic brain injuries. The extent and severity of the injury may not be immediately noticeable. Sometimes it can take weeks, or months before the actual complications become evident. For this reason, you will almost always be advised never to settle claims too hastily. Once you’ve accepted compensation, you are usually signing an agreement not to go back with a future claim.

Get a winning legal team on your claim so that you have sound advice like this. The brain controls literally every area of your life so never downplay what your future can be like if the brain is not functioning as it should. TBIs are nothing to play with, so make sure you know the extent of your injuries before proceeding with that claim. It’s the best advice you can be given, so heed it well.