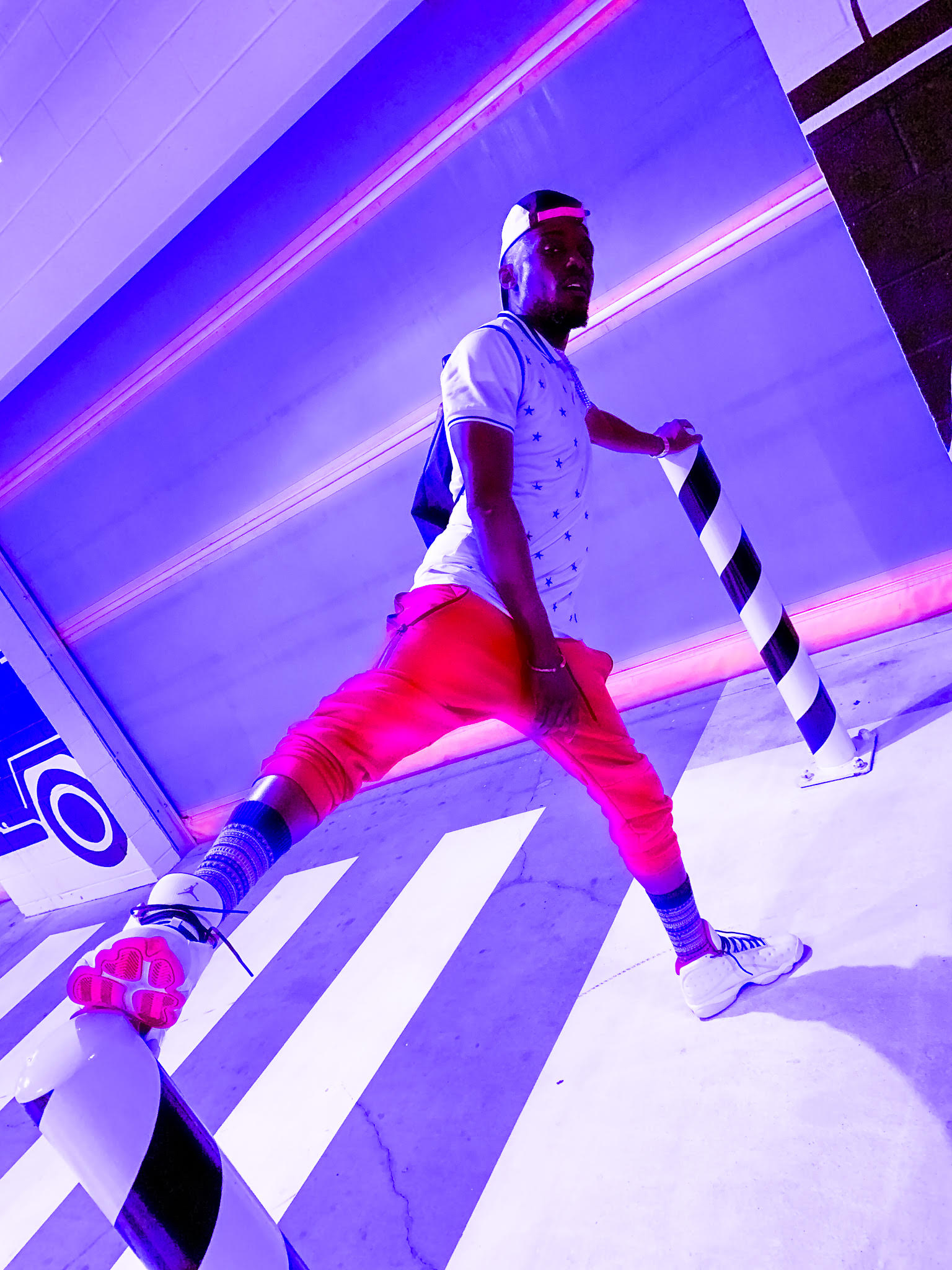 Answer: Hey, thanks for asking, I’m really good. I feel good! Pockets is straight!
Momma healthy! Got my investments heading for the moon! Just copped the new
Foreign! Can’t lie, “life is great”!
For the most part I’m just working 24/7 on my music and this marketing &
promotions company I started. I’ve got a ton of new material coming out just about
every week that I’m really excited about.

Tell us about your background, how did you get to where you are
today?

Answer: I was raised in Atlanta by way of NYC. I’ve been Influenced by artists like
Outkast, T.I., Young Thug and others. I draw inspiration from a lot of artists; I think
Andre 3000, especially, set a high bar with his versatility. That’s something I
modeled myself after. That’s one thing I think a lot of Atlanta artists bring to the
table. You listen to Lil Baby, or even a new wave of ATL artists — they’re not just
rappers; they have more of a harmonious sound blending the melodies, etc.

Where are you from and where do you currently reside?

Answer: I was born in New York and moved to Atlanta at a pretty young age! Atlanta
definitely raised me

Answer: I’ve written songs since high school, but actively started pursuing music as
an artist in 2019 and have since released over 60 records.

Answer: I’ve always been a music fan! I call it “the sound of emotion”. It has always
been around, and played a very active role in my life; even before I started song
writing. My life definitely has a soundtrack! Growing up in Atlanta and being
exposed to its culture of rap and hip-hop music, plus personal experiences helped
me become the artist I am today.
On the “music biz“ side, my first industry gig was as an internship at a major label
music video department, so that was how I got exposed to the actual business side
of music.

What is the most challenging thing you have overcome in the music
biz?

Answer: Definitely the most challenging aspect is the marketing and promotion side
of it. If you’ve already gotten past the roadblock of making quality music, then the
next thing that you’re going to get smacked by is the inevitable and overwhelming
cost to promote yourself. And that’s why artists who already have a huge following
on platforms like YouTube, IG or TikTok bring that following into hip-hop and do
well.

Answer: I’m inspired by the power of music to bring emotional change. Music
speaks to us at a spiritual level, therefore, using music, we can really impact
people’s lives. I came to the artist place I am today because I embraced ME and
allowed that to flow into and through my music.
At the most basic level, I write from personal experience. But equally as important, I
like to use music as an outlet to voice my opinion on various social and political
issues we’re constantly dealing with as a people, not just in America but across the
globe.

Answer: I have so much to appreciate, even though it’s still early, but I think the thing
that stands out most is DEFINITELY when I hit a million streams. It felt good
knowing we did it independently in less than a year! It speaks to the effort,
investment and quality of what we have going on!

Tell us about any new music you have coming out? When is it coming
out?

Answer: I have been working hard and doing promo for my EP called “Packlandia”
since last month. It’s finally out now and is available on all major streaming
platforms. It has three dope songs: The first is “Hallucinations” – its lead single,
which is already getting a ton of buzz and is going up on YouTube. The second one
is “F.O.Y.H.” which translates to “Focus on Yaself Homie” and the third one is called
“Mint Juleps”.
My sound engineer and I have got a ton of new stuff cooked and cooking up in the
lab. In my humble opinion, I haven’t even come close to releasing my best music
yet. We’ve got some cook-ups that are serious stuff! Straight ferocious. I’m going to
start putting out a lot of those right after Packlandia. In fact, I’ve got two coming at
the end of the month (Grey Poupon & Magic)!

Are you indie or signed? What is your opinion on signing with a label?

Answer: I like to say, I’m an independent artist, with a major artist budget! So as I
previously mentioned, I was an intern for the music video department of a major
label prior to becoming an artist myself. A lot of people who have not had the
privilege of being part of a major label don’t know exactly what kind of a machine it
is. So being able to see that machine, up-close, gave me an opportunity to say that I
don’t want to be part of it in anything other than a label deal scenario!

What does it take to be a successful artist in today’s world?

Answer: 10/90! 10% art, 90% business. For me, first, it’s very important that I’m
doing something that I have fun doing and am also passionate about. After that,
learning and getting good at how to operate the business aspect of it is critical, if
you really want to make it big and go places.

How do you feel about TikTok artists that blow up overnight?

Answer: It’s cool, it’s just another outlet if you’re smart and have the right vibes! I
think a lot of artists today have this belief that if you do a few TikTok dances and
wave your arms around, you’ll instantly be going Platinum, have a single and be the
next hot “artist”.
The reality is, the number of people who achieve that level of status is
one-in-a-million and the effort and money it takes is all eff’d up now that the labels
and rich indies are throwing BANDS at the top influencers. When I first got on
TikTok, the top people on the platform didn’t even know HOW to get promo money,
let alone know how much to charge! But they quickly caught on…
For example, in 2019, I had an opportunity to have a top influencer, with over 24
million followers (at the time), do a skit on a record for about $2000. I doubt today,
with all the money the labels have thrown at the platform, she is charging less than
$5000!

Answer: I can tell you what I spent the last 100 Bands on if that helps… Lol! But if I
got handed another $100K right now, I’d definitely go back and pay “TikTok shawty”
the bag she wants!
If I’m being honest, Marketing and promo would soak up 90% of the money and the
balance would be on the creative stuff… videos and studio time.

Are you single? Would you date a female artist, if so who?

Answer: That depends on who’s asking… but for today, I’ll play it safe and go with,
“Yes”.
I honestly don’t keep up with who’s “rocking” who in the entertainment industry like
some do. So I have to “be easy” here because you don’t want to step on any other
rapper’s toes. We’ve already seen how quickly that can escalate. So I’ll just say that
above 23 years old, every bad single chick in the industry is fair game.

If you had to come up with one clout idea, what would that be?

Answer: This one’s easy, I’ve actually been thinking about it! The $85k hover board!
So imagine doing a video like Back 2 The Future, except you REALLY are riding on a
hover board this time. That to me seems REAL gangsta!

Thanks for the inside scoop on you. Real quick…What gem can you give another
rising artist?

Answer: It’s a business first. Don’t get caught up in the glam and glitz. Most people
that get in, don’t make it out filthy rich! You gotta have a strong team! If you’re dope
and smart AND got money… DIY stay indie!
Finally, I make it a point to make my fans feel included in everything I do
music-wise. Put in the effort to acknowledge their support and engage with them.
THEY’re the reason you’re popping, so stay grounded and being grateful is key.

Answer: I can be found on all platforms! Again, for those that don’t know me, I’m
Alpha23 and my info is:

Watch my interview with Rochelle Ritchie powered by Pressful

Sky Palmer is an award winning film director who pivots during the 2020 pandemic to create a platform called Pressful. Pressful.com a new platform to get on-demand press interviews by journalists and get press coverage.