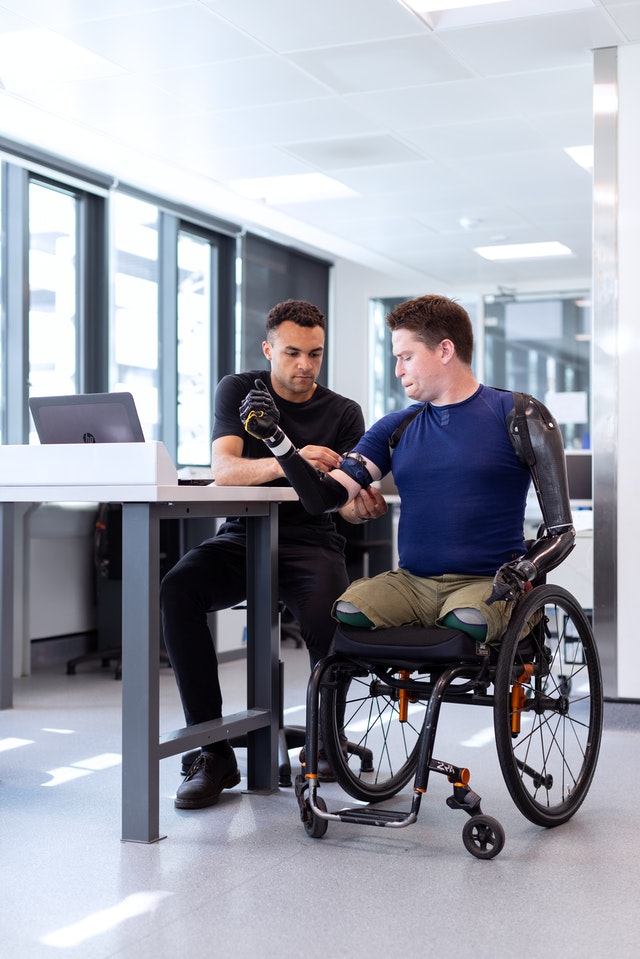 Visit the research facilities of the Georgia Institute of Technology. You may meet Darwin, a pint-sized robot that helps patients meet physical therapy goals.

From enhancing a surgeon’s precision to disposing of medical waste to monitoring health metrics, artificial intelligence (AI) is making a big impact on the sector. Even the pint-sized robots are doing big things in healthcare. It will be fascinating to see where it all goes.

As populations age, one area robots could help tremendously is caregiving. While a lot of caretaking tasks can probably be automated, it’s a little trickier than just administering medicine or getting someone dressed. Here’s what to expect:

The population of those over the age of 65 in America is expected to more than double by 2060, up from 46 million today to 98 million. By then, the 65-and-older age group will represent nearly one-fourth of the population (they make up 15% now).

This demographic shift is precisely why home health aide, personal care aide, and nursing assistant are among the fastest growing jobs. For instance, from 2016 to 2026, the number of home health aides is expected to increase by more than 40%, according to the Bureau of Labor Statistics. In total, more than 1.3 million caregivers will be needed just over the next decade.

This growing need for caretakers is putting workers under strain already. Most caregivers are overworked and not paid well. It shouldn’t come as a surprise that caregiving has a turnover rate of 60%.

All of this means elderly patients aren’t getting the attention and quality of care they need. So, what’s the solution? While more attractive compensation, tapping into new labor pools, and promoting the career as a noble pursuit helps, AI may be the most realistic solution.

What’s noteworthy is that the current limit isn’t in the technology, as robots can perform many caretaking duties, from doing home chores to assisting with physical therapy. It’s in making the technology affordable. When that day comes, it will be possible for caretaking to be automated — but robots won’t take out the role of the human caregiver entirely.

We still need a human touch

Caretaking is much, much more than handling the physical needs of patients. There’s an emotional element that’s equally important.

For instance, one thing elderly people need is companionship. Due to the demands of the job and shortage of workers, caregiving isn’t getting this part done for patients. Among aging Americans, 43 percent report feeling lonely on a daily basis, according to a study conducted by the University of California, San Francisco (UCSF). The scary thing is the UCSF study also found that seniors who reported feeling lonely were more likely to decline and die faster.

In another study done by researchers at Brigham Young University, it was discovered that the subjective feeling of loneliness increases the risk of death by 26%. This makes it as threatening as obesity, excess alcohol, and smoking. Clearly, we should be paying more attention to loneliness among those that need caregiving.

Robots can certainly help with easing loneliness to some degree by being there when human caregivers can’t. But can they actually connect to people in a way humans can?

The short answer is that robots can offer some emotional support, but can’t do it in the same way humans can (at least for now).

Caretakers provide uniquely human services that cannot currently, or easily, be automated. While AI may possess the technical skills to perform physical caregiving tasks, the emotional side of the job will necessitate that human caregivers remain.

The future role of robots and humans in caretaking

Louise Aronson, a geriatrician, is an advocate for introducing more robots to the field of caregiving. Aronson attests that robots could solve the workforce issue by “strategically supplementing human care.” She adds that robots could even “decrease high rates of neglect and abuse of older adults by assisting overwhelmed human caregivers” and replacing those who have intentionally abused patients.

Robots can lessen the workload and handle more labor-intensive activities, such as helping with exercise, cleaning the kitchen, and changing clothes. What this will do is give caregivers more time to focus on the more human side of the job, which could include:

Beyond repetitive manual tasks, robots could offer more assistance by engaging with patients, providing emotional support and social connection when caregivers are busy. For instance, there are already chatbots that could talk about the weather during breakfast, provide a reminder that a family member is coming to visit, and answer questions about a variety of topics. They could even read and play games with patients.

Virtual reality (VR) can play an exciting role in caregiving as well. One great development has been OmniVR, a rehabilitation system that takes patients to a virtual world where games like ‘sit and stand’ bingo can be played. The software captures data from patients, providing caregivers and other medical staff with important data to improve outcomes.

Being able to do all this for patients, the benefits AI can bring to caregiving are tremendous. For example, giving your brain a daily workout reduces the risk of dementia. Since robots can keep the brains of seniors stimulated by doing puzzles or teaching them something new, they can possibly be instrumental in preventing the disease.

Automation in Caretaking: A win-win for everyone

Let’s go back to the original question: Will caretaking ever be automated? The answer is yes, but not entirely.

Many may make the mistake to think robots will engineer humans out of caregiving. I don’t believe this will happen.

Ideally, the best thing that can happen is AI becomes a vital partner to caretakers. They will probably even perform a lot of tasks more efficiently and properly than their human counterparts, such as giving the right dose of medicine or cleaning dirty sheets more effectively. This is a good thing.

I also think that, because robots will step up and handle a lot of the heavy lifting and tedious and detail-oriented activities, patients and their families will begin hiring caretakers for their ability to meet emotional needs and achieve better health outcomes, rather than just their ability to help out with daily activities. This will require human caregivers to become much better at the emotional and creative aspects of the job.

If this happens, caretaking will advance in amazing ways. Everyone will benefit, most importantly the patient.

Joel Landau is the founder and chairman of The Allure Group, a rapidly expanding provider of skilled nursing and rehabilitation services throughout the New York downstate area. The Allure Group transforms nursing homes into post-acute rehabilitation centers that are attentive to the needs of residents when it comes to their health, comfort, culture, and quality of life. Landau is also the co-founder and managing director of Pinta Capital Partners.